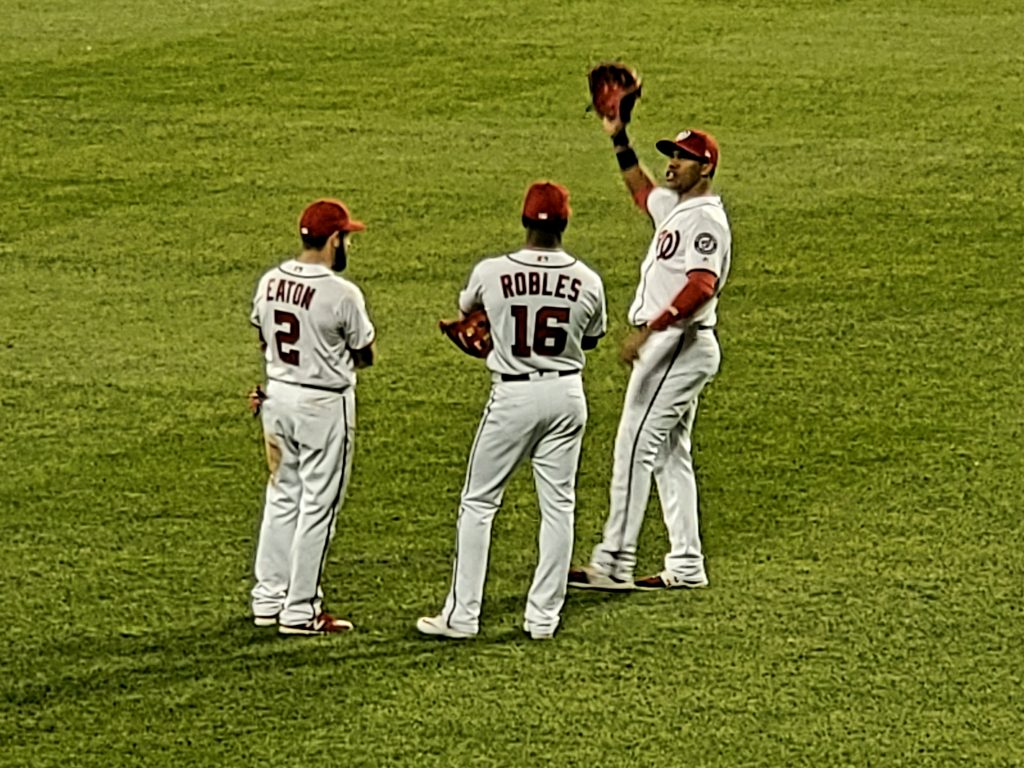 The outfield did it tonight with their bats, gloves and arms to get the Nats going tonight as the team returned to .500 on the season at 8-and-8 in what should have been considered a trouncing of the Giants and MLB’s number one bullpen. The Nats got to Giants starter Jeff Samardzija early with a Juan Soto two-run bomb and a Howie Kendrick  home run and an Adam Eaton RISP single.

It was the Nats defense that saved the day with Victor Robles throwing out a runner at 3rd base and Juan Soto making a running catch on a liner down the line to save 2 runs. Jeremy Hellickson went 5 2/3 innings of 2-run baseball and also got a great diving stop by Anthony Rendon at 3rd base to save Hellickson another run.

Speaking of Rendon, he got a single in his final at-bat to extend his hitting streak to 15 games.

In the 7th inning, Matt Adams crushed a three-run homer, and Kurt Suzuki added a two-run shot to push 5 runs over on the Giants bullpen.

Not to be overlooked, Matt Grace took advantage of the cool weather and wind blowing in slightly to retire pinch-hitter Pablo Sandoval at the wall in the right-center gap with a man on first base in a 4-2 game at the time. Wander Suero pitched a scoreless 7th inning for the hold.

The ugly bullpen reared its head when Austen Williams could not retire an out in the 9th and gave up 4 runs and was replaced by Kyle Barraclough who got a quick out only to be replaced by Sean Doolittle in a non-save situation. Posey greeted Doolittle with a smash off the centerfield wall to start his night. Doolittle walked Brandon Belt to make it interesting then K’d Brandon Crawford and then got Evan Longoria on a foul-out to seal the victory  9-to-6.