The home run on Tuesday from Victor Robles has changed the vibe in two cities! 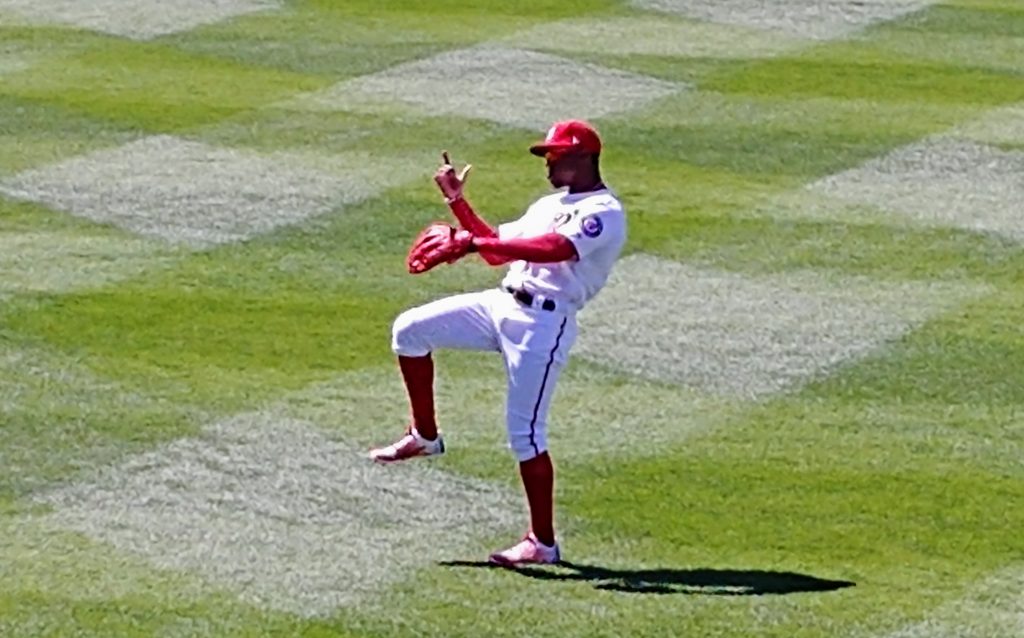 The Nationals had already celebrated two walk-off wins in their first homestand of 2019, but there was still a damper on this young season due to the leaky bullpen that had set Nats fans into a funk until they could find new hope. That new hope came in the form of one swing of the bat from Victor Robles to tie the game on Tuesday night in Philadelphia in the 9th inning with 2 outs, as the Nats snatched a win out of the jaws of defeat from a game they trailed 6-1 and then rattled off 9 unanswered runs. In that same game, the bullpen pitched 6 scoreless innings to allow Juan Soto to win that game in the 10th inning with a majestic 3-run home run. Last night, the Nats dismantled the Phillies by a score of 15-1 in front of fans who voiced their displeasure in the stadium and on social media. While ticket sales were 30,805 for last night’s game, there were more empty seats than there were bodies in them to start the game, and by the 8th inning there was almost nobody left but Nats fans who sat among the remaining Phillies fans exhibiting their disdain with a chorus of boos.

It is like we just did a 180° reversal back to 2014 when the Phillies’ stadium was empty and their fans were booing Ryan Howard and anyone else who did not perform to their standards. It is so bizarre since two Sundays ago we heard a lot of Alex Rodriguez on the ESPN mic extolling the virtues of Philly as a great sports town while he made a ridiculous statement to cutdown Washington, D.C. in some sort of attempt to justify Bryce Harper going to the Phillies.

“D.C. is about 130 miles down the road, but let’s make it clear, it’s a world of difference between markets,” ARod said on the ESPN Sunday Night Baseball broadcast in Philadelphia. “If you’re over there, you’re thinking about politics and what happens in the White House. If you’re here, this is a sports town and they looove their Phillies.”

In reality, it did not take long for that Philly love to seemingly turn to hate quickly. You don’t boo someone you love, and last night the boos echoed in their ballpark almost from the 4th inning until the last out.

Where's all the smart ass Phillies fans now. I told folks on Twitter that the Phillies pitching was suspect. Nick Pivetta is a fucking Bum and he should be pitching at Lehigh Valley. John Middleton is the stupidest Owner giving Bryce Harper $330 million when his pitching Blows!

Sorry ARod, you should be charged with an error. You owe D.C. an apology, and you showed that you play to the audience you are promoting on any given day. The sad part was that the Phillies were not even playing the Nationals in that game, but yet ARod decided to roll with that.

Scott Allen wrote this in the Washington Post, “… several fans who were irked by Rodriguez’s comments already have [pointed out], that Washington has outdrawn the Phillies for five consecutive seasons.”

The NL East should be a dog fight for sure, and the Nationals are just 11 games into a marathon of a 162 game regular season. We have already seen that the level of play has made most of these games feel like they have a playoff intensity since the Nationals have only played their rival New York Mets and the Phillies. The first opponent the Nationals will face outside of the NL East will be the Pirates tomorrow night.

Given the bullpen woes and the broken finger Trea Turner sustained in the 4th game of the season, it is no wonder why Nationals fans were a little restless, but certainly not ready to jump off a ledge two weeks into the season. There is no doubt that this team can go places, but Nats fans also know that while this team is 6-5, they could also be 8-3 if the bullpen didn’t implode. In the 5th inning with the score 9-0 last night, MASN analyst F.P. Santangelo took a jab at Nats fans.

“How quickly it can turn, huh. A couple of days ago everyone is ready to jump off the ledge,” Santangelo remarked during the MASN broadcast on Wednesday. “A big win last night. Nine to nothing tonight in the 5th inning. Obviously a ton of baseball left to be played in this season and this game. But. You go to Philadelphia, and everyone is going nuts here. Now after three games not so much.”

A quick note to F.P. not “everyone” was ready to jump off the ledge. Yes, some people were — but they were the same people freaking out on Opening Day. There was a lot of warranted discontent with the bullpen and with some of the decisions of general manager Mike Rizzo and  Nats skipper Dave Martinez. But that is baseball and sports in general.

The good news is the Nationals just played some of their best baseball we have seen in a long time. The slumping Brian Dozier just got some key hits, and the hitless Matt Adams had a big game yesterday. On top of that, Trea Turner is expected to return in early to mid-May. If the Nationals can turn their bullpen into an asset instead of a liability, this team could be a very good team.