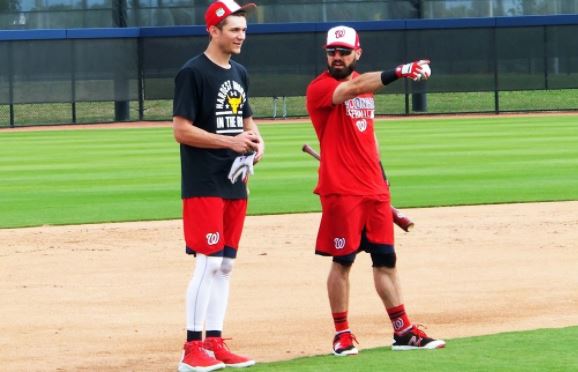 Possibly the biggest news out of the Washington Nationals camp yesterday was when manager Dave Martinez disclosed his entire batting order, and yes, Trea Turner is his choice at lead-off with Adam Eaton in the 2-hole. Last season it was the reverse with Eaton leading off and Trea in the 2-hole. Also, Martinez wants to be more consistent in his batting order formation during his second season.

“I like for me right now — I do like Trea leading off, Adam hitting second then Rendon then Soto then Zim,” Martinez told The Junkies. “For me, right now we have two lefties in our lineup so it stretches it out a little bit better. I like Soto hitting behind Rendon. Dozier will be sixth then the two catchers. Then we are flexible, we can hit the pitcher eighth, Robles/Taylor nine.”

Why the change from Adam Eaton to Trea Turner at lead-off? Dave Martinez only said it was to spread out his two lefties a little more in the batting order. That makes some sense, but there has to be other reasons you would think. If the speed game is a goal this year, Turner is one of the fastest players in the game as measured by Statcast™ metrics. They can measure speed in “feet per second, in a player’s fastest one-second window,” and 27 feet per second is the Major League average. The elite speedsters touch 30 feet per second and sometimes the best “tell” on sprinting to first base is when a batter smells an infield hit. Statcast defined those in 2017 and Trea Turner was the second fastest at 31.2 feet per second.

The Nats brass wants to take advantage of Turner’s speed this year, and Martinez went public with wanting Turner to attempt 75-80 steals this season.

For General Manager Mike Rizzo, he explained that the stolen base success rate better be up to high standards or you should not attempt stolen bases. The use of slo-mo video replay has only hurt base stealing percentages.

“The great ones are 80-85% [success rates],” Rizzo said. “When Trea gets a good jump he’s going to be safe, and he’s one of those special types of baserunners that if he gets a good jump it’s going to be really really difficult to throw him out…You have to be smart. We want you to steal bases when they mean something. Eighty bases are great but if thirty of them come when you’re up or down 5-0 that doesn’t have the impact for me. The great base stealers are great when everyone in the ballpark knows that you’re gonna steal and you still steal the base.”

If you ask Trea Turner, he has a different take on Martinez’s goal for him and acknowledged that Martinez did convey the message of 80 steal attempts, but the old saying rings true that you cannot steal first base and Trea feels that if he gets on-base enough everything else will work.

“I got to get on first [base],” Turner told The Junkies. “But for me, if I can get on-base and get that many opportunities to steal a base, I think I’m doing something right. Helping the team out, probably score a lot of runs that way.”

This 25-year-old gets it. His job as a lead-off man is to get on-base and score runs. Let the batters behind him do their job. Trea does not set specific goals rather practical goals of improving which means that he wants to get on-base more.

“Davey set the [stolen base attempts] number,” Trea said. “But I don’t really set goals because for me … if I steal 30 of 30, is that a bad year? Or if I steal 100 bases, that’s more than whatever you said. I don’t set numbers. However many I have an opportunity to steal, I would like to do that, and I think the game dictates what that number is.”

Yes, opportunity usually dictates the possibilities in the real world of baseball. You cannot steal bases with the bases loaded or when a slow runner is ahead of you on the base paths or when your team is ahead by eight runs and that is part of the reality of the game. Davey compared Trea to the greatest of the base stealers during his era as a player.

“Like I said, I did a lot of stuff over the winter, and you watch some of the great base-runners, Rickey Henderson, Tim Raines,” manager Dave Martinez said to the The Junkies. “I went back. In the year that [Jacoby] Ellsbury stole all those bases. You see how many attempts these guys [had]. Rickey Henderson had like over 100 attempts every year. And Tim Raines, he was up in the 80s. Ellsbury – the year he stole all those bases – he was like 88 attempts.”

Turner did attempt 52 steals last year. As we often say, “Speed Kills”. Rizzo’s original vision when the Nats made the blockbuster trade to acquire Adam Eaton was creating a prolific top of the order with players who could wreak havoc. With Eaton’s injuries in 2017 and 2018, the havoc wreaking never really materialized. The advantage of Eaton hitting behind Trea gives a slight advantage on stealing with a lefty in the batter’s box with a right-handed catcher as the catcher has to clear a throwing lane. Also, with Turner on first base and being held on the bag, Eaton will have larger infield holes to hit grounders through. Those are some of baseball’s intangibles and more reasoning to bat Turner atop the order.

“Every time [Trea Turner] is on-base [he’s] a threat,” Martinez said. “When he goes on-base, he’s always on go. I look at Trea that when he goes — we go. He’s an exciting player. He understands what he wants to do. He came in with a whole different attitude on what it means to get on-base not just for him but for the ballclub.”

There really is not any guess-work on the line-up now as Davey Martinez gave his vision for the batting order. Where does Matt Adams fit in? He would be the third lefty when Juan Soto and Adam Eaton are in the line-up, but Davey did not commit to a batting order with Adams in it, just this one:

For Trea Turner, he does not care to speak of specific goals and wants to focus more on specific improvement. Turner was challenged to work more walks and he did that with 69 last season. Getting on-base more and stretching more singles into doubles seem like good macro goals.

“For me, you can pick certain things in the game and try and make them better,” Turner told The Junkies. “I can do some things on defense to make myself a better defender. I can do some things on the bases, whether it’s just attempting steals, and then the same at the plate, I think I can be a little bit more consistent and have good at-bats. Each year, I just try to pick something and work on it a little bit.”

Turner could be the key to the Washington Nationals success this year. If he can improve his statistics over last year, that would be a real plus for his team. Can Trea raise that batting average to at least his career average of .289 and increase? He has increased his walk percentage year over year, and if he could get his BB% up to 9.8%, that would only require an improvement of just 3 walks over last season with the same number of plate appearances. Couple those walks with 192 hits (.289 BA), and that would give Trea a .364 OBP. For comparison, a .376 OBP mark last year ranked 10th in the NL, and consider most of the top OBP men are home run hitters. Turner seems to want to shoot his sights higher.

“With my speed and my hard-hit-ball percentage, there’s no reason I shouldn’t hit .300,” Turner said.

Last season, Trea only had 27 doubles and 6 triples, and Davey Martinez said he wants Michael Taylor to reach 40 doubles while not hunting home runs — that goal could be part of what Turner should strive towards also. We saw that in Monday’s game where Turner hit a double with no outs and then promptly stole third base after the batter could not advance him. Trea can manufacture runs, and he scored 103 runs last season which ranked 6th in the NL. 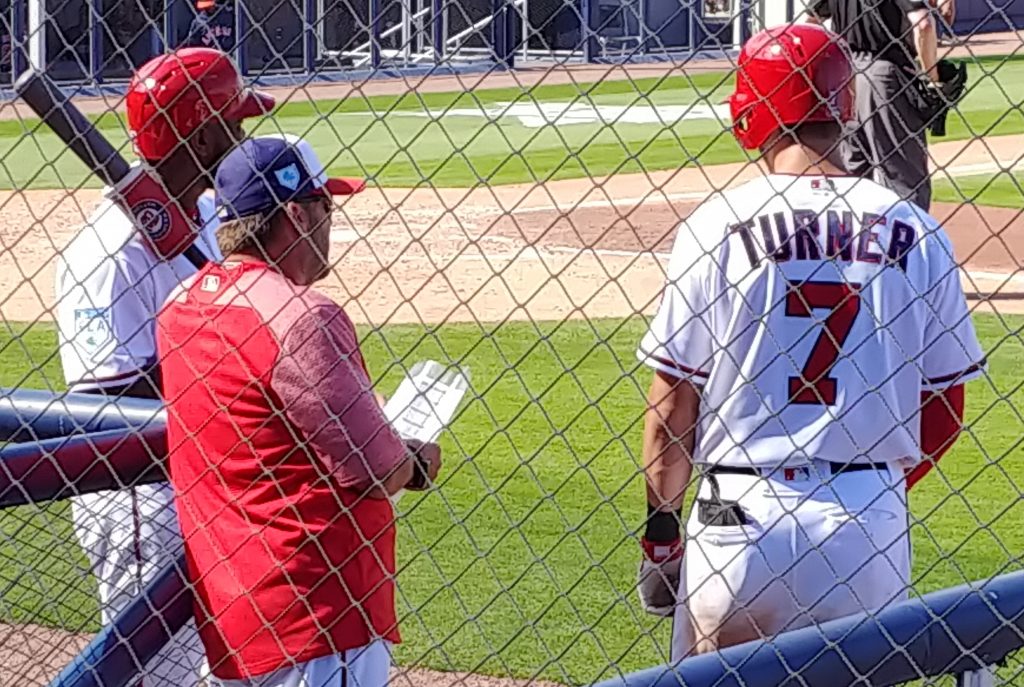 Of special note on Trea’s future with the team, he said “no not really” to the question if his agents at CAA and the Nationals have had extension talks.

“Yah, why not,” Turner said regarding an extension.“I think for me I’m comfortable here and everyone is great — and the grass isn’t really greener on the other side. I think you should always have your ears open and whatever happens — happens. You know, I think it will take care of itself if I just go out and play baseball.”

There you have it. The Nationals have to think of bridging some longevity with key players. The lesson learned from the Harper experience should be that if an extension is not completed before the players’ final arbitration season, it becomes highly unlikely that the player will stay long-term.