“And then what?” A Bryce Perspective 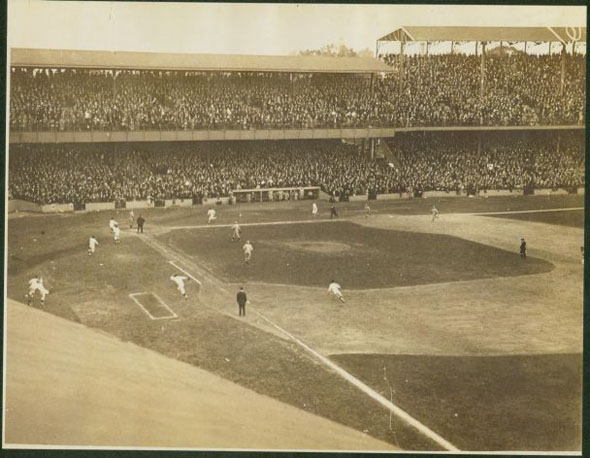 Oct 10, 1924 Muddy Ruel brings home Washington’s only World Championship. Bryce may yet win a title. But, it won’t be for old DC.

It is often said that life imitates art.  Actually, it’s the other way around.  But, the idea that what we witness on a daily basis can be captured in just a few hundred pages of writing or a few hours of film is strongly on-point.  The long and exhausting Bryce Harper Free Agency saga has come mercifully to a climax.  The cases for enticing him to stay or shooing him to the ether were made forcefully and often.  For whatever reasons one follows baseball the fact remains that few pursuits find such a breadth and span of human and systemic characteristics.  On full display are frailties and ambition steeped in a brew of boiling unbridled capitalism.  It is full of humble hail fellows well met and hopelessly vainglorious divas.  A complete spectrum of personalities resides between the two poles.  There was never any doubt about Bryce, however.  “Diva” always felt inadequate in describing him.  It just was never strong enough a descriptor of his visible and obvious self-absorption.

For those who have seen the movie “The Natural,” but never read Bernard Malamud’s book, here is a spoiler alert: It ends badly for Roy Hobbs.  Gifted with amazing talents Hobbs is consumed with hubris and ambition.  Asked by the deeply disturbed Harriet Bird what Hobbs wanted out of life his reply was, “To be the best that ever was.”  Deftly she asked, “And then what?”  There was no answer.  Hobbs had never thought past that singular and shallow goal.  After all, self-absorption has its limitations.  One of them is that there is life after achievement.  What does one make of it?

Bryce’s singular goal for his Free Agency was straightforward; become the highest total-value salaried player in baseball history.  Every element of the dance was all about which of the various franchises would fulfill that dream.  But, the goal itself is more illustrative than the ceaselessly documented process.  He wanted more than anyone else ever.  Such naked desire was firmly rooted in the conviction that he was worth it.  With the prize in hand we all echo Harriet: “And, then what?”

Hobbs’ biggest failing was that he couldn’t see past himself.  When he reported to the Knights the city was in such a drought that the field had turned to dust, the water in the dugout was foul, and the team was in a protracted losing streak.  Hobbs’ first hit, the triple that knocked the cover off of the ball occurred simultaneously with a downpour.  The rain lasted for three days curing the drought.  The team’s fortune changed as well.  Hobbs was gifted with a power to heal.  But, he could never grasp that he was so endowed.

For “The Most Powerful City on Earth” Washington spent more than a generation suffering the indignity of being baseball’s rented mule.   Used for leverage before any suggested or imagined move by a franchise against the local government, the Washington fan base built many the modern retro stadium somewhere else.  But, none of them ever came here to call it home.  Eventually the Montreal franchise, horribly…no, criminally mismanaged, then owned by the MLB corporation came to town.  Getting baseball was one thing.  Getting good baseball was another. The Nationals may not have invented the modern franchise maneuver of “Tank, then Soar,” but, they certainly executed it to near-perfection.  The pair of prizes for that were two Number 1 choices in a row; Strasburg and Harper.  If there was rain coming to break a decades-long drought these two were the first hopefully vapor-laden clouds to appear on the horizon.   Winning seasons, Division titles, and memorable-though-heartbreaking series have ensued.  But, the full measure of deliverance has eluded the grasp.  It’s been 95 years this October since Muddy Ruel scampered home joyously to bring DC its only World Series title.  When given the chance to leave the twin Number-1’s took different tacks: Strasburg decided to stay while Bryce bolted to land his individual honor.  When given a chance to be the career icon and title deliverer he eschewed it for glitter.  The Nationals’ franchise offered a lot.  It just didn’t come with the bragging right he most craved for his personal collection.

Superstars, despite the ongoing media saturation surrounding them are rare.  Bryce was Washington’s first baseball superstar since gentle and humble giant Frank Howard.  Harper moved the national media needle.   Production on the field will be replaceable as many have enumerated all winter long.  But, the Washington presence in the national media will now have to come from winning alone.

What comes after is still the operative question.  With no opt-outs on either side the contract could be solid gold for the Phillies or lead encapsulated by gold-leaf.  There’s no way to know until 2032 if it made sense or not.  Given the fate of nearly all of the mega-year and mega-money contracts to date, the odds are not good.  But, Bryce will have his precious blue ribbon in the trophy room.  It may well have been surpassed by then by others such as Mike Trout when he hits the market in just two years.  For one year Bryce got the highest contract ever.  He got to plant the flag on his personal Everest.  To him that’s all that mattered.  Much like the ill-fated Hobbs, nothing and no one else did.