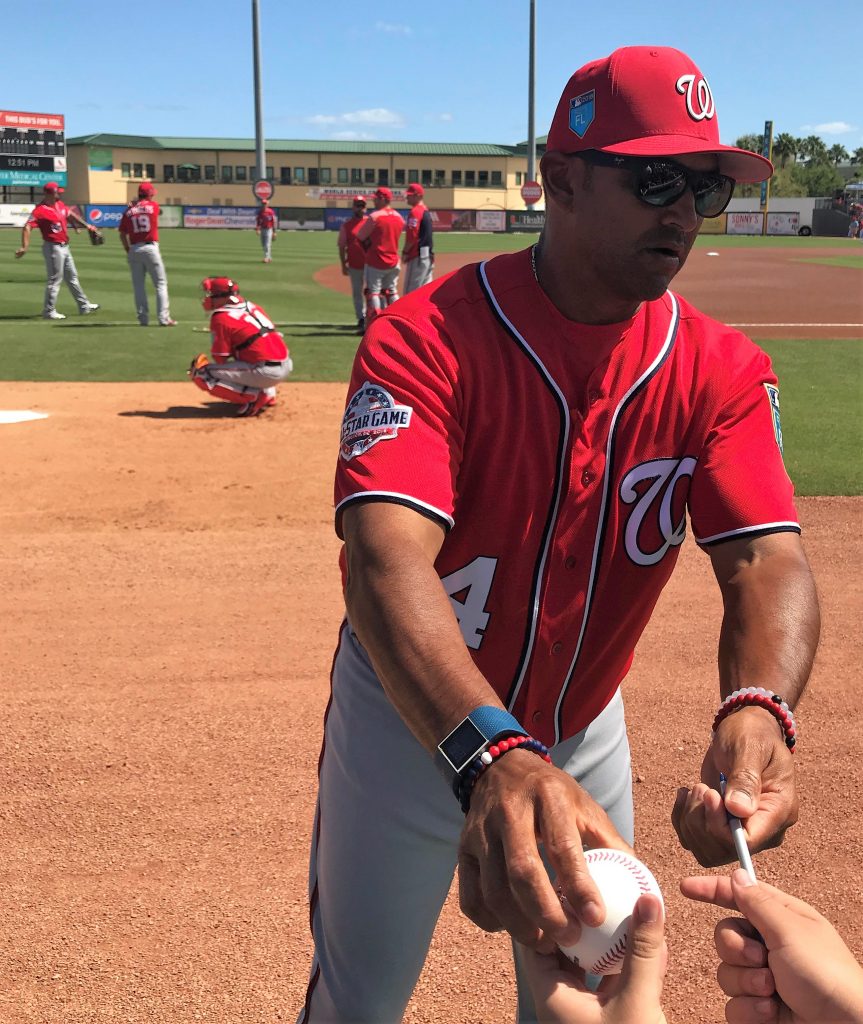 Photo by LEGnats for TalkNats

The Washington Nationals have come out firing in Grapefruit League play. But while they had to come back to win last night, today’s contest at Roger Dean Stadium in Jupiter against the St. Louis Cardinals was pretty much a rout.

Starters Erick Fedde and Michael Wacha acquitted themselves well, with the Nats’ Fedde flashing a sharp breaking ball and locating his fastball well to the corners of the strikezone as he gave up one hit and nothing else over two brisk innings. The Nats’ relief corps mostly held up well. Austin Voth let up a solo home run to Cardinals outfielder Tyler O’Neill, and after Koda Glover walked the bases loaded, Austen Williams let in an inherited runner after a line drive popped out of the glove of second baseman Jacob Wilson. But the Cardinals collapsed, with a parade of relievers including Daniel Ponce de Leon, Genesis Cabrera, and Andrew Morales struggling badly. The Nats pulled away in the middle innings and won 12-2.

Fedde gets the TalkNats game ball for two excellent innings. The Nats got contributions from a number of players on offense, but none more than third baseman and Ryan Zimmerman doppelganger Jake Noll, who went 3-for-3 after entering the game with an RBI single, an RBI double, and a ninth-inning solo home run. (It seems like when the Nats score double-digit runs in a game, there should be more than one game ball.)

Ryan Zimmerman lookalike Jake Noll just launched a Zimmerman-esque homer way deep to left to put the Nationals up 12-2 in the 9th. Noll had already singled and doubled today.

Glover was subject to a quick hook after walking three batters in a row, and Williams got some extra warm-up time as he entered the game. St. Louis pitcher Morales also left the game early with an apparent injury. Our hopes are that both pitchers will be OK. Spring injuries are no fun.

An injury to Glover could open up the Nats’ bullpen competition this spring a little bit further, as most assumptions have been that Glover (who has minor league options remaining but is well-regarded by the organization as a potential future closer) is likely to make the Opening Day roster. With Sean Doolittle, Trevor Rosenthal, Kyle Barraclough, and Matt Grace (none of whom have pitched in Grapefruit League action just yet) as the only locks for the bullpen, the remaining spots are up for grabs, with Glover, Wander Suero, Sammy Solís, Justin Miller, and Vidal Nuño (who pitched a scoreless inning today) appearing to be the early lead candidates.

Tomorrow, Nats co-ace Patrick Corbin makes his debut for Washington against the division-rival Atlanta Braves in Kissimmee. That game will not be televised but will be broadcast on radio.

Some Spring Training warming up by the Ghost yesterday as the Summoner:

This entry was posted in Recap, SpringTraining. Bookmark the permalink.
← Previous Article | Next Article →