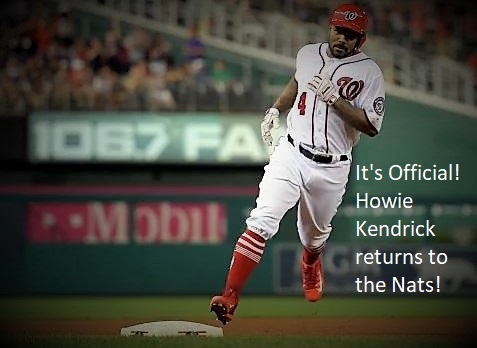 It was a year ago that Howie Kendrick re-signed with the Nationals on a two-year deal. Sometimes life kicks you in the shin, and in Kendrick’s case it bit him in his right Achilles tendon early last season. There was doubt he would ever make it back. In fact at the Nats WinterFest event, the 35-year-old gave some pause on his progress because he still had milestones to meet before he would be cleared for baseball activities. Today, some good news on Howie’s progress.

“The only guy I had a little concern with was Howie, but I spoke to him and he said he’s rip-ready to go,” manager Dave Martinez said. “He’s been running sprints for about a month now, so he jokingly said: ‘Don’t hold me back.’  I said: ‘Well, you’re kind of up there in age, so I don’t know if I’m holding you back, but I will take care of you.’ “

While Kendrick might lag behind most of the players by a few weeks, the good news is he should be ready to go on March 28th which is Opening Day. The bench with no other changes would be: 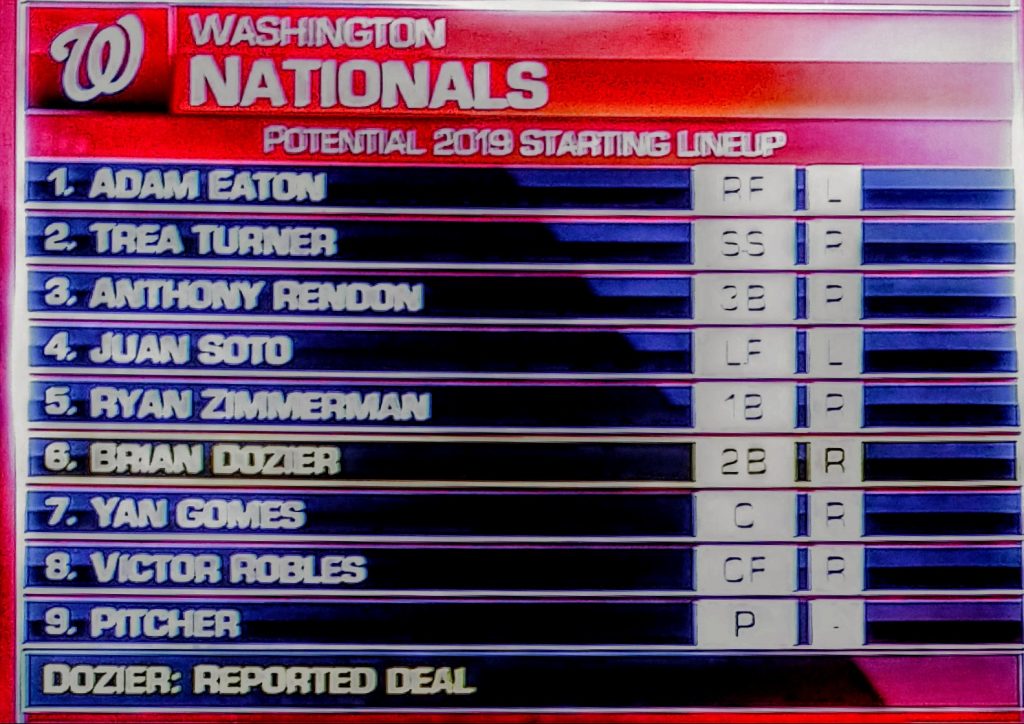 This is what the team looks like today, and the only debate would be from the 25-man roster, who are the 9 best players to start on Opening Day?

“We really added to what I think and Davey thinks makes a championship organization tick,” Mike Rizzo said. “Pitching. Defense. Athleticism. Speed. I think we improved in all four of those aspects. It’s a big part of our identity as far as trying to develop a championship caliber club. We are going to play the best 9-players that are the best that day and may the best man win.”

“Like Mike said, the best 9 guys will play every day — most of the time — but you still have a job to do off of the bench,” Martinez said.

This week along with the past football season has a lesson here about playing the best starters. For those who do not know the story of quarterback Joe Flacco, he was benched this season even though he was making $12 million and won his team a Super Bowl ring previously. Flacco only played for one-team in his career and was a first round draft pick. This week he was traded. He helped lead his team to six postseasons and as mentioned won a Super Bowl. Did I mention he was also the Super Bowl MVP? In his career, Flacco was never a Top-5 player, but he was a solid player who had some Top-10 seasons. Still, the lesson here was his time was over, and his successor, Lamar Jackson, led the Ravens to first place in their division.

We can debate whether the Ravens made the right move. Hopefully Rizzo and Martinez know that story and discuss it. Playing the best team is subjective, but usually stats and the eye test firm up the subjectivity. Martinez, too often in 2018, constructed lineups that did not look like the “best nine”. When he talks about “the little things”, does he critique himself as to his own little things?

The Nationals roster is loaded with star players with or without Bryce Harper. In fact, the MLB Network rated the Nationals with 7 players in their Top 100. Martinez has a very good roster to create lineups. Here was how those 7 players ranked:

In addition, the Nationals have the 11th and 12th top rated catchers with Gomes and Suzuki. Can this duo put in a combined effort to rank the Nationals catchers into the top rankings? It could happen when you consider a starting catcher usually plays less than 66% of the time behind the plate, and if there is a weak backup catcher, that team could collectively fall in the rankings. With two good catchers like Gomes and Suzuki, the hope is the sum of the parts is better than the whole.

While the position players look almost set along with the starting rotation, it is the bullpen that could have openings to join Doolittle, Trevor Rosenthal, and Kyle Barraclough. There are plenty of candidates like Justin Miller, Matt Grace, Sammy Solis, Koda Glover, and Wander Suero will all compete for the final four spots in the bullpen. This could also be the year that the Nats put a spot starter in the bullpen in the long-man role.

“I got 58 guys in camp that I have to worry about and get them ready for this season,” Martinez said. “With that being said, there’s some really good players still available. So hopefully they get jobs soon, but my focus is on the guys we have in camp.”

The manager was asked about the Harper kid and glossed over it then was asked a more uncomfortable question about the dromedaries.

“You might not see any camels,” Martinez said. “But that doesn’t necessarily mean you aren’t going to see any animals.”