When one door closes, another one does not necessarily open. The demand for a player changes when a large market team is “out” on a player. With A.J. Pollock signing a long-term deal with the Los Angeles Dodgers, it is widely thought that they are “out” on not only Bryce Harper but also Manny Machado. The Dodgers in late December were thought to be the destination for Harper after they traded Yasiel Puig and Matt Kemp especially when Bryce Harper “liked” a Dodgers related post on Instagram. Whoops. The Dodgers have now spent to near the CBT limit and according to Cot’s Baseball are at $198,168,333 which essentially gives them less than $8 million below the cap.

The three most likely spots for Harper all look to be “out” on him: New York Yankees, Los Angeles Dodgers and Chicago Cubs. That has to be a blow to Harper who has to pivot to a Plan B of sorts — but the Washington Nationals might still be open to bringing back Bryce Harper.

With Pollock to the Dodgers it would most likely signal that the Dodgers are "out" on Bryce Harper.

Thanks to SoonerNats for stopping in the sportsbook at the Wynn Casino in Las Vegas to pick-up the latest World Series and pennant odds for us. The betting has pushed the New York Yankees to 3½:1 favorites today: 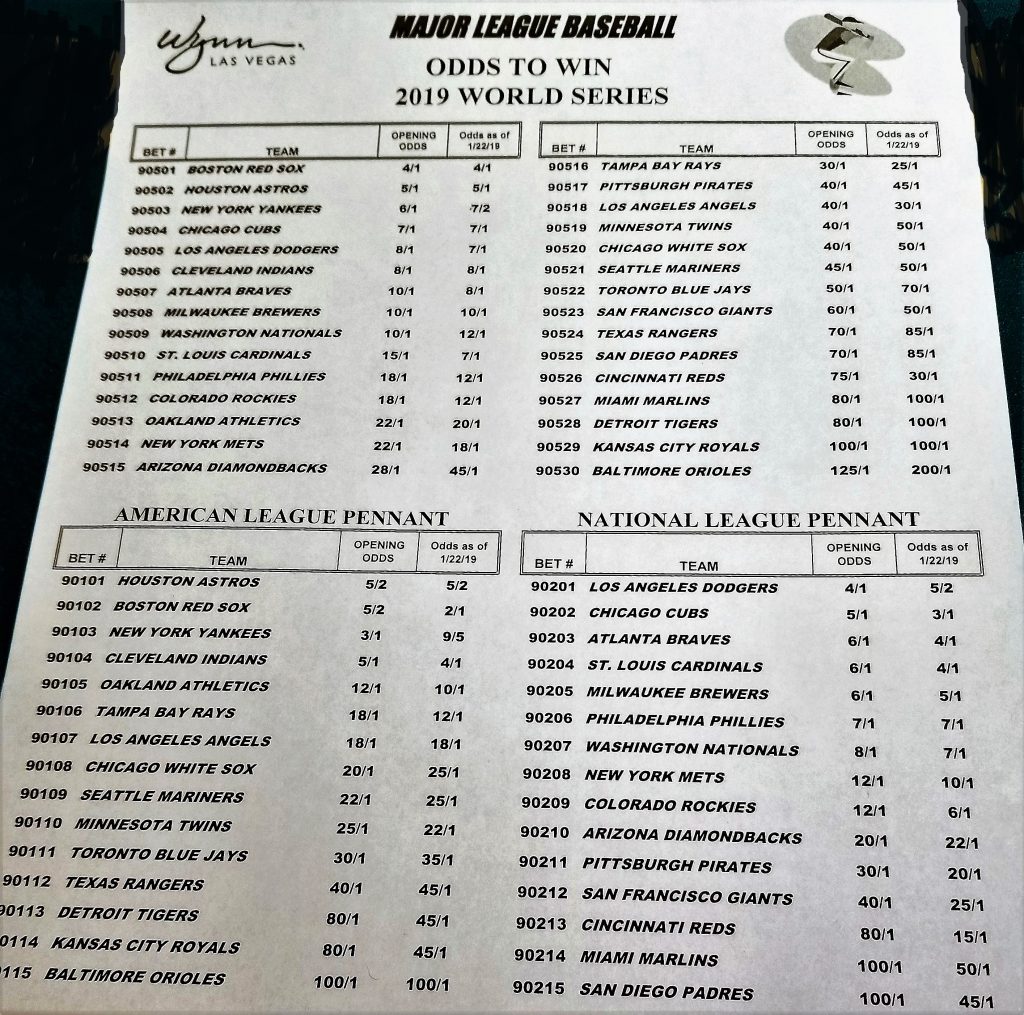 On October 31st, Westgate sportsbook posted their initial World Series odds, and after player acquisitions and initial betting, the odds have changed greatly to today. 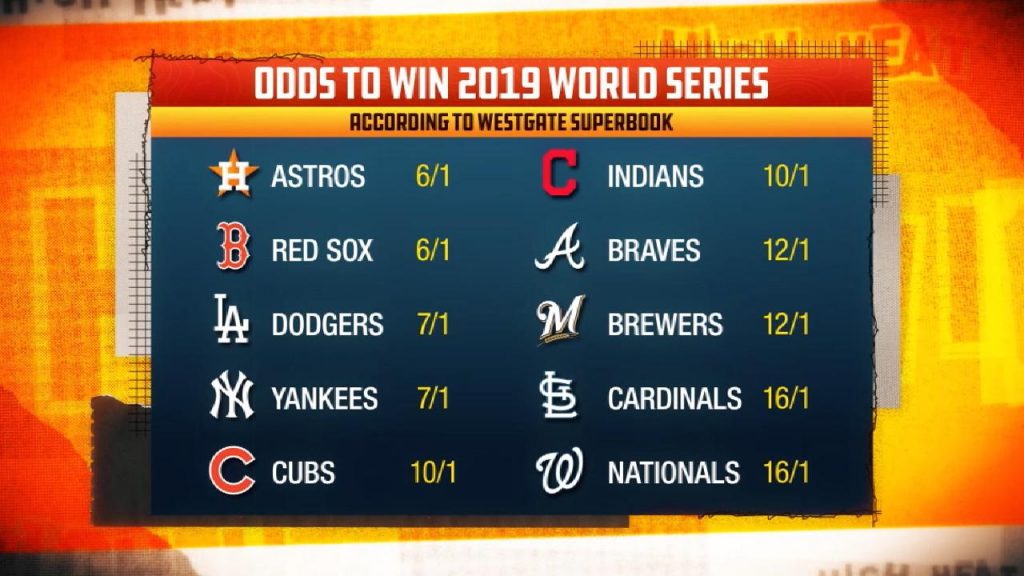 The Harvard Business Review just did a report on how toxic bosses harm employees in countless ways, and this could certainly be relatable to a GM, manager, or business owner. The article can be read on this link.

Tomorrow will be the Mike Rizzo Hot Stove at Nationals Park at 3 pm for full season ticket holders who RSVP’d to the event. We will write about the event on Saturday night: 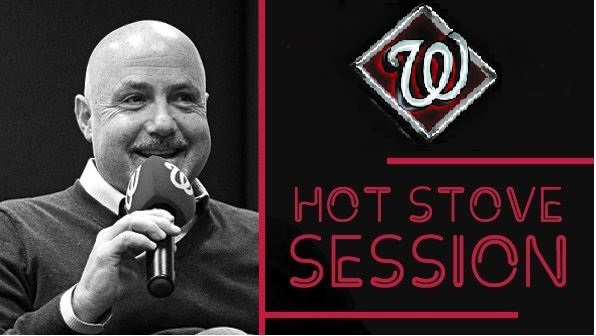 MLB is reportedly considering returning to a 15-day disabled list and increasing option time for players sent to minors. According to the AP report, there were 702 separate DL placements in 2017 and another 737 in the 2018 campaign. Increased DL stints and minor-league option use made it easier for teams like the Tampa Bay Rays to use relievers as “openers” to start games and the Los Angeles Dodgers to keep starting pitchers fresh. The Washington Nationals were one of the teams that did not “game” the system.

Rating services like Baseball America and Baseball Prospectus are coming out with their Top 100 rankings of top prospects. The Nationals have three consensus Top-100 players who are all position players in the rankings with Victor Robles, Carter Kieboom and Luis Garcia. Baseball Prospectus is more bullish on the Robles and Kieboom.

And @baseballpro has published their Top Prospects list and they are certainly more bullish on Robles and Kieboom:

Bo Porter is back with the Washington Nationals. He will be joining Dan Kolko on the pre-game and post-game show on MASN. This is what Bo wrote on his social media:

“I am extremely thankful and grateful for the opportunity to return to Washington to cover the Washington Nationals for MASN. I coached the Nationals for two seasons (2010-2012) and they were two of the best seasons of my MLB career.”

“I now have a chance to come back more well rounded and give the best fans in baseball an in-depth perspective using my experience as a former MLB player, coach, manager and executive. I am honored to be joining the MASN Team as the Pre-Game and Post-Game Baseball Analyst and I’m honored to work alongside the talented Dan Kolko. I’m looking forward to us “Raising a lot of curly W!” #NatsWin #NATITUDE  #MASN #@therealboporter #@BoPorter16Bo #I’mBack #Blessing”

That is some big news! Welcome back Bo Porter! https://t.co/RfRQYNdsx5

Alexandra “Alex” Chappell (formerly Alexandra Corddry) is the new on-field reporter. Like Dan Kolko and Johnny Holliday, she is from Montgomery County and grew up in Bethesda, Maryland attending Walt Whitman High School. Alex went to many Nats games as a teen so this job allows her to stay rooted in the D.C. area after stints in Tampa. She got married last weekend to her husband Scott Chappell who is a patent attorney. The couple live in McLean, Virginia.

This also signals the end of Ray Knight on the MASN broadcast after 12-years. Knight was a staple on the MASN broadcasts from the early awful years through the successful years. Knight had a very honest approach in his analysis and called it the way he saw it even if there was a negative vibe to his analysis. Fans seem to appreciate Knight’s candor. After we reported an in-studio off-the-air incident with another employee, Knight was removed from the remaining broadcasts to finish the 2018 season.

Thank all of you for your support and sharing my passion for the Nationals.12 of the most enjoyable years in my career. Also,want to express my deep appreciation to the Lerner family for allowing me to be a part of a exciting time of Nats baseball. They truly are the best Owners

With the long Federal government shutdown, the Washington Nationals have donated $100,000 to a food bank and several players like Max Scherzer, Sean Doolittle, and Trea Turner have made personal contributions.

Help the @nationals, my teammates and I donate to great PEOPLE! The Nats announced they are donating $100,000 to @foodbankmetrodc to support DC families who are being affected by the shutdown. If you want to help here is some more info! #Nats4Good https://t.co/2bsU03j26D