The Montreal Expos — The decade of the 80’s 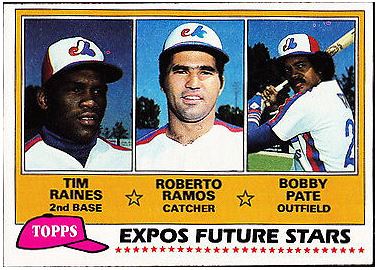 When the 1979 season came around the Expos were about to enter their 11th season. Their high-water mark was 79 wins but there was a feeling in the air that the team was on the cusp of something very special. The outfield consisted of 3 young studs: Valentine, Dawson and Cromartie, we had Larry Parrish at 3rd and Gary Carter at catcher, the starting lineup was augmented by big red machine alum Tont Perez and veteran SS Chris Speier along with speedster Rodney Scott at 2nd. The starting rotation was: Rogers, Sanderson and Palmer along with veteran Bill Lee and Ross Grimsley. The pen was a veteran crew led by Elias Sosa, Stan Bahnsen and the old tobacco farmer Woody Fryman.

In 1979 there were only 2 divisions in each league and there were no wild cards, you win your division, or you go home. The Expos fought the Pirates tooth and nail all year, that Pirates team was led my Willie Stargell, Dave Parker and Bill Madlock. As the calendar reached September the Expos were a couple of games out but many rainouts forced a ton of double headers, I still recall a couple of back to back double headers and in the end no pitching staff could sustain such a workload and the Expos fell just short but with an outstanding record of 95 – 65. The team of the 80’s had arrived.

In 1980 the horse race still involved the Expos but this time around the main opponent were the Phillies from Philadelphia. The Expos development factory was about to graduate Tim Raines and Tim Wallach to go with new young starters Bill Gullickson and Charlie Lea. GM John Mc.Hale brought in Ron LeFlore to play CF moving Warren Cromartie to 1st base. The race came down to the last weekend where the Expos and the Phills entered the last 3 games in a dead heat with a 3 game series in Montreal to close out the year. After the Phills took game 1 the teams played a Saturday afternoon extra inning classic where Expos manager Dick Williams committed a colossal blunder pitching to Bob Boone with 2 men on and 2 outs even though the Phills were out of bench bats. Boone came through and Montreal suffered it’s 1st late season heart ache.

1981 was one of the most interesting years in Expos history. Some cracks were beginning to show in the talent laden team. Ellis Valentine who was quite possibly the most talented player I have ever seen had long stints on the DL with mysterious injuries like a sore buttocks (I kid you not). This was also quietly known as the Cocaine era and while the Braves were commonly known as America’s team the Expos were unkindly referred to as South America’s team. Mc.Hale decided to try and nip this in the bud by trading Ellis Valentine for closer Jeff Reardon. Tim Raines was later suspended for Cocaine possession, so this was never just a Valentine problem. 1981 was also a strike year, and when the strike was settled midway through the year MLB decided on an interesting playoff setup; the winners of the 1st half would play the winners of the 2nd half to earn a spot in the LCS. The Expos also decided to terminate the prickly Dick Williams who was universally despised by his players and replaced him with long term team exec Jim Fanning who came into the job with no managerial experience.

Against all odds the Expos won the 2nd half setting up the team’s 1st playoff appearance in it’s history against the Phillies. The teams split the 2 games in Montreal and the 1st 2 games in Philly leading up to a game 5 on a Sunday afternoon in Philadelphia. The Expos sent it’s long time ace Steve Rogers to the mound and like a true champ he pitched a complete game 3 – 0 shutout to send Montreal to the NLCS.

Like the previous series the NLCS went to a game 5 and it was scheduled for a Sunday afternoon in early October except that it rained all day, the teams tried on several occasions to remove the tarp and start the game but in the end the game was postponed until Monday afternoon of all things. I have very vivid recollection of that day. I brought a 14 inch black and white TV to work and about 20 people congregated around my desk to watch the game. As the top of the ninth arrived the teams were tied at 1 and the Expos closer was on the DL, Fanning asked Steve Rogers to pitch the 9th and with 2 outs Rick Monday sent a ball over the CF wall to stun a packed Olympic Stadium and bring about the 2nd heart ache, That day will forever be known in Montreal as blue Monday.

Even as we sat in stunned silence on that Monday afternoon, we all knew that the team will be back in the playoffs many times in the near future because they were that good, unfortunately things didn’t go the way we planned. Jim Fanning returned as the manager and he was over matched badly, Larry Parrish was traded to the Rangers for Al Oliver with Tim Wallach taking over at 3rd base, Doug Flynn was the new 2nd baseman and Cro returned to the outfield. The team finished 1982 with an 86 – 76 record and in 3rd place. It was the beginning of the end. The crowds who came in throngs the past 3 years rocking the stadium with ‘Valderi Valdera’ were starting to thin out.

In 1983 Mc.Hale made another blunder by hiring Bill Virdon as his field manager. Virdon was possibly the most boring person I ever had the displeasure to observe, the team reflected the managers personality finishing at 82 – 80 and in 3rd place again.1984 was worse, the team brought in an over the hill Pete Rose and the combination of Bill Virdon and Jim Fanning who was once again asked to take the helm led the team to a 78 – 83 record and 5th place.

1985 brought with it 2 significant changes. The Expos hired Murray Cook to be their GM and Buck Rogers to manage the team. Buck was the polar opposite of Bill Virdon, that is to say he had a personality. While not brilliant he was a good people manager and he was able to bring more out of his players without much effort. Cook was a sharp young executive who had a promising management career going until he got involved with the wrong woman who happened to be married at the time to club president Claude Brochu. The affair ultimately led Cook out of town although he did take the former Mrs. Brochu with him.

In a stunning move the Expos traded their iconic catcher Gary Carter to the Mets for a trio of players led by SS Hubie Brooks. This one never went over well with the Montreal fans. The team ultimately finished the season with an 84 – 77 record and once again in 3rd place. The Olympic installation board finally gave up on the idea of a retractable roof and agreed to make the roof a permanent fixture. It was the end of weather related delays but also the end of beautiful Sunday and summer evening games. The place really became a concrete coffin where fewer and fewer casual fans wanted to go 1986 was another very disappointing year ending at 78 – 83, the new faces were 1st baseman Andres Galarraga and right hander Denis Martinez.

In 1988 the team returned to contention winning 91 games. With the addition of colorful Pascual Perez and the impending arrival of the next crop of young stars led by Larry Walker, Marquis Grissom and Delino deShields it was beginning to look like maybe the 90’s would be the Expos decade but there were

storm clouds on the horizon. Principal owner Charles Bronfman grew tired of the uphill struggle of trying to convince American free agents to come north, he was also taking a much larger role at Seagrams and at the world Jewish congress and he was ready to sell the team. The problem was that Montreal had no TV contract to fall back on, the Stadium was dark and outdated and the Canadian dollar was falling making the operation less and less attractive. No one wanted to buy the team, so Bronfman sold it to his trusted lieutenant Claude Brochu and he even loaned him the money to buy the team. Brochu never had the resources to own a major league team and in coming years he would lose many players to bigger market teams.

In the meantime, the Expos promoted the next young GM star, none other than dealin Dave Dombrowski and before the Expos finally expired Dave and his successors managed to produce one more run. Dombrowski engineered a big trade during an abortive run in 1989, he acquired a rental Mark Langston for a trio of youngsters one of whom was none other than Randy Johnson; Langston left after the season making this one of the worst trades in team history.1988 and 1989 were both transitional years and both ended up at .500 we also saw the departure of another iconic Expo Andre ‘hawk’ Dawson. Walker and Grissom had graduated, and the team was ready for the next leg up