Does Bryce Harper want to re-sign with the Washington Nationals? 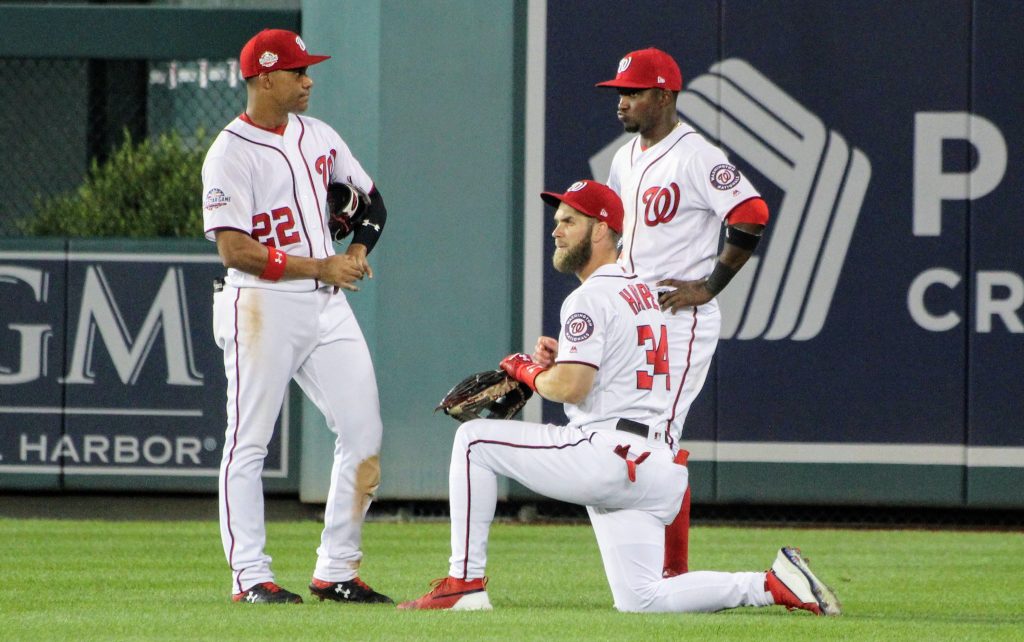 For the first time since the season ended, it feels like a reunion with Bryce Harper is a real possibility.  So that begs the question, does Bryce Harper want to re-sign with the Washington Nationals? The answer to that question lies within Harper, and he will do the grand reveal in the next few weeks we believe. Until then, it is a daily soap opera with few clues to the ending. It is a tortured journey for some as they feel like their heart-strings are being tugged.

Two months ago, Harper left us at the end of the season with some wonderful soundbites that led many to believe he wanted to stay if he was in the Nationals’ plans which we later learned from principal owner Mark Lerner that Harper absolutely was in the Nationals plans, and Harper knew that based on the timeline of when he received that $300 million Nats offer — but yet said “I’ve got to know if I’m in the team’s plans”. He was clearly in the plans and even though the door seemed almost closed — the door is open again.

Part of what we have come to expect from Harper and his agent Scott Boras is a few rounds of drama. One day he is liking an Instagram post about his desire to play for the Dodgers, and another he is celebrating New Years with his favorite player on the Chicago Cubs. He actually follows the same number of Dodgers players (two) on Instagram as he does Nationals players (two).

There is plenty of reason to love Bryce Harper. He is a superstar in so many ways even though you can debate the statistics and facts.

“Of course he is in our plans,” general manager Mike Rizzo said.

“He wants to be back here. I know that,” Dave Martinez said.

Harper has to show he wants to return to Washington, D.C. because actions speak louder than words as he is reportedly set to visit the Philadelphia Phillies who want his services. A false rumor broke on Twitter that Harper to the Dodgers was already done. There was a little drama along the way two weeks ago when Harper “liked” and “unliked” a Dodgers Instagram post as his favorite. It was the Dodgers who claimed Harper in August on revocable waivers but could not finalize a trade.

There is no doubt that Harper has professed his love publicly for La La Land before. Following the timeline if you believe it, Chelsea Janes wrote that Harper met with Nats owner Ted Lerner three weeks ago before that Insta-love, and the meeting was for 5-hours of love. There was also this story from the New Year from ESPN’s Jeff Passan, “Harper has met multiple times with representatives of the Washington Nationals, according to a club source.” Add to that, Jim Bowden tweeted that the Nationals upped their offer to “much more than the $300 million being reported by the media.” All of this should make Nationals’ fans happy about their team’s persistence and that they are willing to spend money. All of this new involvement from the Nationals seemed to flush away the closed door a month ago from Mark Lener.

“When we met with them and we gave them the offer, we told them, ‘This is the best we can do.’ We went right to the finish line very quickly,” principal owner Mark Lerner said last month. “And we said, ‘If this is of interest to you, please come back to us and we’ll see whether we can finish it up.’ But we just couldn’t afford to put more than that in and still be able to put a team together that had a chance to win the NL East or go farther than that.”

Our source told us that, “if he wants to stay the Nationals ownership want to figure out how to make that happen.” But that seems to go back to “it takes two to tango” and begs that question of whether Harper wants to return. Dan Federico of Bleacher Report NY tweeted that Ted Lerner “wants a ring and doesn’t care about spending money.” Federico’s tweet also includes a tidbit on Jayson Werth’s influence on Bryce Harper not liking the Phillies. That is something all Nationals fans can agree with.

Scott Boras has been quoted as saying that Bryce Harper changes how batters around him are treated. DonH decided to see what the 2018 data says (see his description/dislaimer below). Click on the image to download the full Excel file. 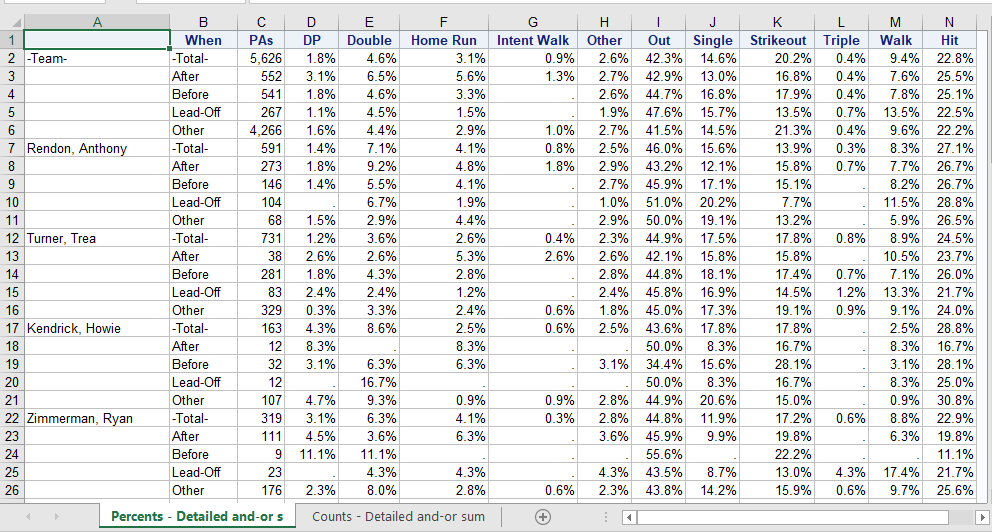 The numbers on Harper has a level of intangibles where he does seem to make those batting around him in the line-up better. On top of that, Fangraphs believes Harper is worth a +4.9 WAR value for 2019. That is a game changer based on that production.

The GameDay data for 2018 was downloaded and summarized to produce the spreadsheet that is available by clicking on the above link. Note that this data was downloaded at different times over the season and DonH is aware of some issues where not all the data was obtained. MLB Advance Media changed how postponed games are handled (compared to previous years) and so some of them are missing and some of them may have the partial (not an official game) included. Over the course of all the games, the impact of that should be minimal. But please be aware that there are some potential data integrity issues.

Interpret as you see fit. Note that there are lots of confounding factors in such an analysis and the above summary table should not be seen as a definitive analysis. 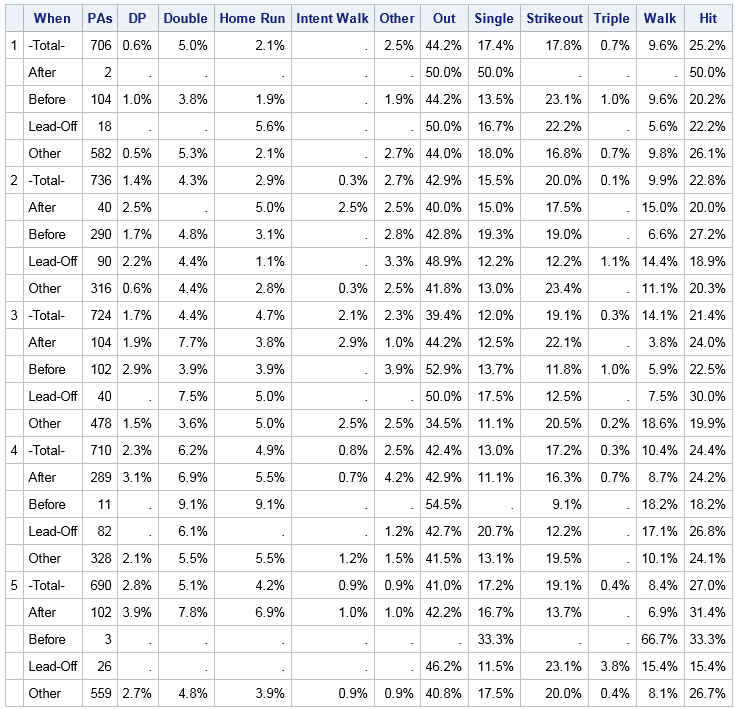 Again, interpret as you see fit. And note the disclaimer above about the quality of the data.