Posted on December 2, 2018 by ArVaFan aka Laura Peebles 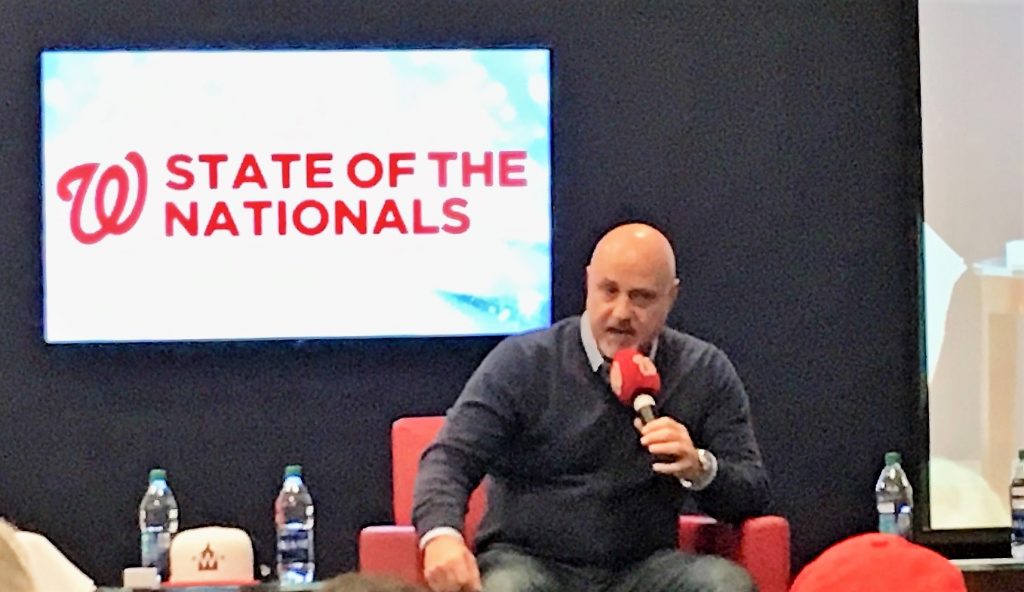 Well, if I had to grade Winterfest just on today, I’d give it a B-. There were more players (hello, Kiebooms!) and the weather was less bad (albeit still cold and damp) so the kids’ activities outside were available. I would say the fan attendance was actually less than yesterday, just based on the number of fans in the State of the Nats session. Of course, since it wasn’t raining, people could spread out more: eating at the tables they set up on the plaza vs. hiding under the concourse and worshiping the heatlamps, and the centerfield plaza infield was in use for the kids/players interaction. 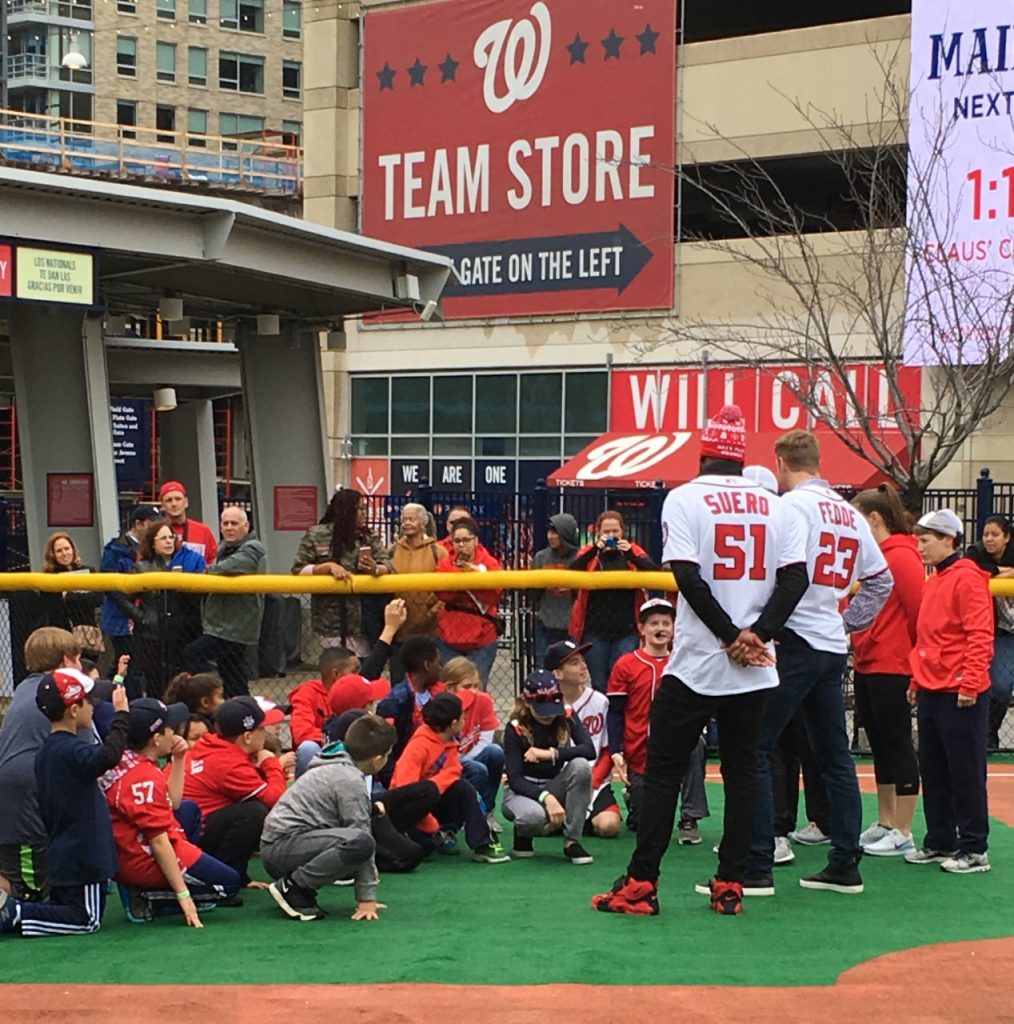 I forgot to mention one advantage of being in the Park: the video monitor system. So if you were standing in line for a photo or signature, you could listen to the Coaches Q & A, one of the games, or the Kids’ Press conference throughout the park, including in the stores. Speaking of standing in line, my autograph session was Pedro Severino, Wilmer Difo, and Bob Henley, which pretty much filled up my 2017 West Palm Beach cap. Luckily I have a 2018 All-Star game cap to start in FL 2019. So that worked out nicely. Apparently the secret is to get an early session.

Back to the State of the Nats redux

Mike is still looking for pitching and bullpen help. Didn’t mention second base, and said what we’ve all been saying: the outfield is set with or without Bryce Harper. Acknowledges that “25-man roster” is a misnomer: you need 45-50 players for a full season. He thinks that pace of play is more important than length of game. Putting more balls in play would help the pace of play: he seems to think that hitters will adjust. He emphasized “NO WINDOW! Look who’s coming up in the minors: Wil Crowe, Luis Garcia, Kieboom(s).” Mentioned that Kieboom’s baseball IQ is really high (I assume he meant Carter, not Spencer). Expects Joe Ross to compete for a starting pitcher slot in ST, expecting 160-180 innings from him in 2019. Praised Rendon as the silent star: the best player no one’s ever heard of.

I know we’ve all heard this before, but it’s still funny to see Rizzo and DMart reenact the moment after Howie Kendrick went down. Rizzo goes to Dave Martinez’s office, gives him the news that Howie is out for the season. Rizzo looks at Davey and says “we’re bringing up Soto.” Davey says, basically, “whut?” Thinks, okay, break him in gently facing some right-handed pitching . . . until he saw him take batting practice and then launch a home run in his first start. Kept trying to give him a day off, but Juan Soto would say “no, no, no, I want to play!” (Davey goes into slightly accented English imitating Soto).

Today we had Mike Shane, one of the VP’s, instead of Valerie. He promised kids’ giveaways once a month (on Sundays), and Fireworks Fridays. Davey leaned over again and said “we really want a raincoat night.” Someone asked Shane if he was surprised at the reaction to the bullpen cart (which apparently attracted the same number of fan photos as Santa). He said, “no, that ‘do something for cat people’ and ‘we want a bullpen cart’ had lobbying efforts worthy of a DC political lobbying campaign.

Someone asked about bunting against the shift as a means of getting on base. Rizzo says that it’s harder than it looks—great if it works, but even good bunters are not 100% effective. Davey said that he discouraged Bryce Harper from bunting except against pitchers he’d struggled against. He’d rather have a chance at a “hit it out of the park” vs. a risk of a foul bunt out. And of course, when Matt Adams tried it, he broke his thumb and was out for six weeks. Someone immediately said to Rizzo that he thought Matt Adams should be brought back (cheers from audience). Rizz’s response “duly noted.”

Looking forward to Spring Training, Davey is planning “no-bat” days. He says the guys love to hit: they’ll stay in the batting cage for an hour. So he’s planning on days of just baserunning and fielding drills, coordinating team plays. Davey acknowledged that maybe he overused Solis. He said that Solis tends to get in his own head when he doesn’t get quick outs and that’s an area for them to work on.

In the coaches’ session, they acknowledged that Chip Hale is interviewing for Baltimore.

One of the questions was “what do each of you do in the offseason that’s not baseball?” Some (including Rizzo) follow other sports, lots like to eat out. Henley dug a pond, so now fishing is much easier: he just skips feeding the fish for a couple of days and fishing is a breeze!

Mike mentioned that he’s definitely open to an Anthony Rendon extension (that’s been all over social media, so no point in denying that rumor). On Michael A. Taylor, he specifically said that guys like him don’t fall out of trees, so they’re going to work on his one area of weakness (strikeouts) because if he can improve that, he goes from four to five tools.

Mike emphasized that they sign a person, not a player, so they really consider how someone is going to fit on the team, in the clubhouse, and in the community. He’s really proud that the only place the Nats have appeared during his tenure has been in the sports pages. “And when we find we’ve made a mistake, we get rid of him.” 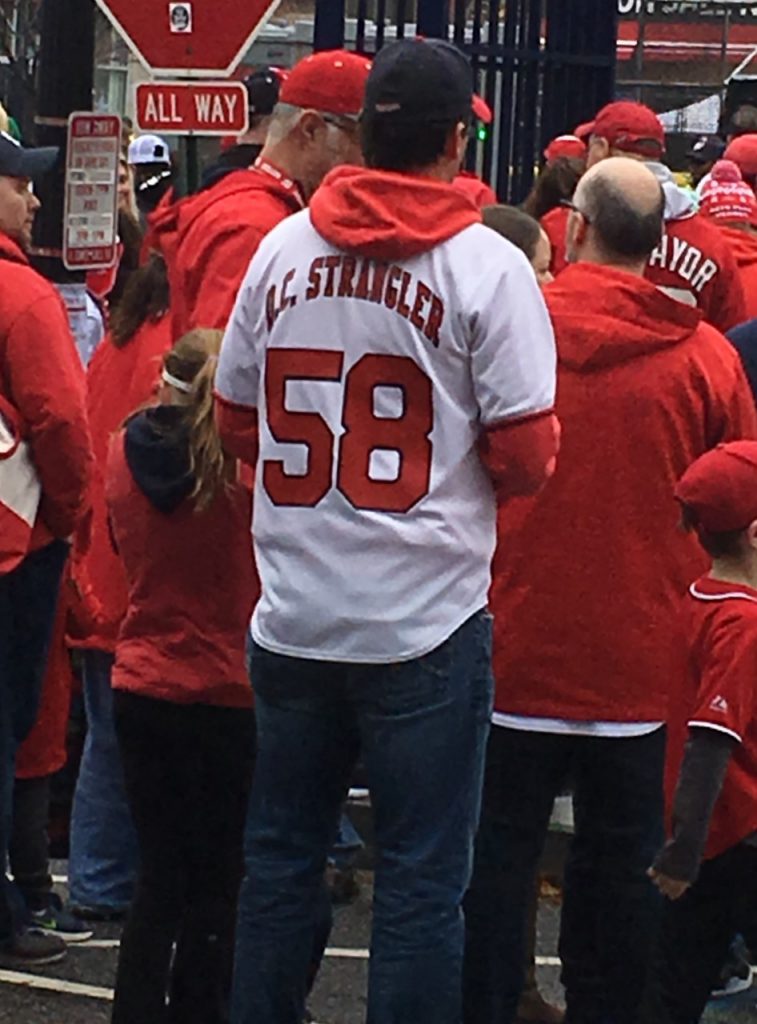 Someone noticed Davey’s bracelets and asked about them. The company, Lokai, is involved in a lot of charity efforts, and Davey is pushing for a bracelet giveaway (although he was more adamant about the raincoat).

Chip Hale answered a question about winning streaks: he said that once one gets going, it’s a different guy every night that picks up the team, and it’s just a level of confidence that “hey, we’ll get those runs back.”

Bob Carpenter’s How to Score a Game session

Now that Scorebook_Bob is a thing on Twitter, his wife won’t let him go to bed after a game until he’s posted [hmm, sounds like my spouse and “have you posted your game summary yet?”]. Speaking of his spouse, she won’t let him mention Spring Training until January 29.

He explained why the scorebooks have 100 or 200 games (it’s a printing thing: the professional version used to be 180 to cover the regular and post-season, until some New York guy called him and said “I keep running out of pages because my team keeps going to the post-season. So they went to 200 for the pro version). The 100 is partly driven by the printing limitations, which also explains why the regular version only has 13 innings. He sized the regular scorebook to fit in purses, thanks to feedback from his wife, daughters, sisters.

He explained how to deal with “batting around” and extra-inning games. (Re-number the columns for batting around, using the whiteout tape he has in his pocket: extra innings beyond the page capacity: use a page from the back of the book and tape it on later.)

Someone asked him about what he’ll do with his scorebooks after he’s gone. He says he hopes that there will be a Nationals Hall of Fame soon at Nationals Park. He knows that’s the only way he’s going to get into the Hall of Fame is by donating the scorebooks.

And the weirdest play he’s ever had to score? Well, he’s seen several triple plays and inside-the-park home runs, but the weirdest play by far was the Michael Morse pantomime grand slam. He gave a verbal play-by-play on that one to wrap up the session to great applause.

Here follows pretty much useless information from the various sessions:

The app (which was required for the autograph sessions) has a little moving ball in the upper left corner to keep the phone from going back to sleep while you’re between “okay, I found the ticket” and the actual scanning time. Maybe everyone already knew that, but for those who’d been using the cards to get into the park, and will now have to go with paper or app, that may be useful info.

Tim Bogar’s older brothers got him into baseball-mostly because they used him as a target for pitching practice.

Tim Bogar quote “sometimes I have to be the brain for the baserunner.”

Kevin Long is the guy who takes new guys around new ballparks and works on how the balls are going to bounce off the outfield walls (i.e. Soto, Robles).

Ryan Zimmerman eats a big lunch, then a snack like a peanut butter & jelly sandwich before the game, then dinner after the game—even if it’s after midnight.

Zimmerman’s favorite hero was Ironman: Bogar’s was Aquaman. Growing up, Zimmerman’s baseball hero was Chipper Jones (Braves games were what you could get where he was growing up). Bogar looked up to Brooks Robinson and Ozzie Smith. When Bogar got his first double, Ozzie smacked him on the rear and said “I hope you get 100 more of those,” which made Tim feel as if he really belonged in the big leagues.

Spencer Kieboom was taking photos with fans and his younger brother Carter Kieboom was working the curling area (I guess in case this baseball thing doesn’t work out). 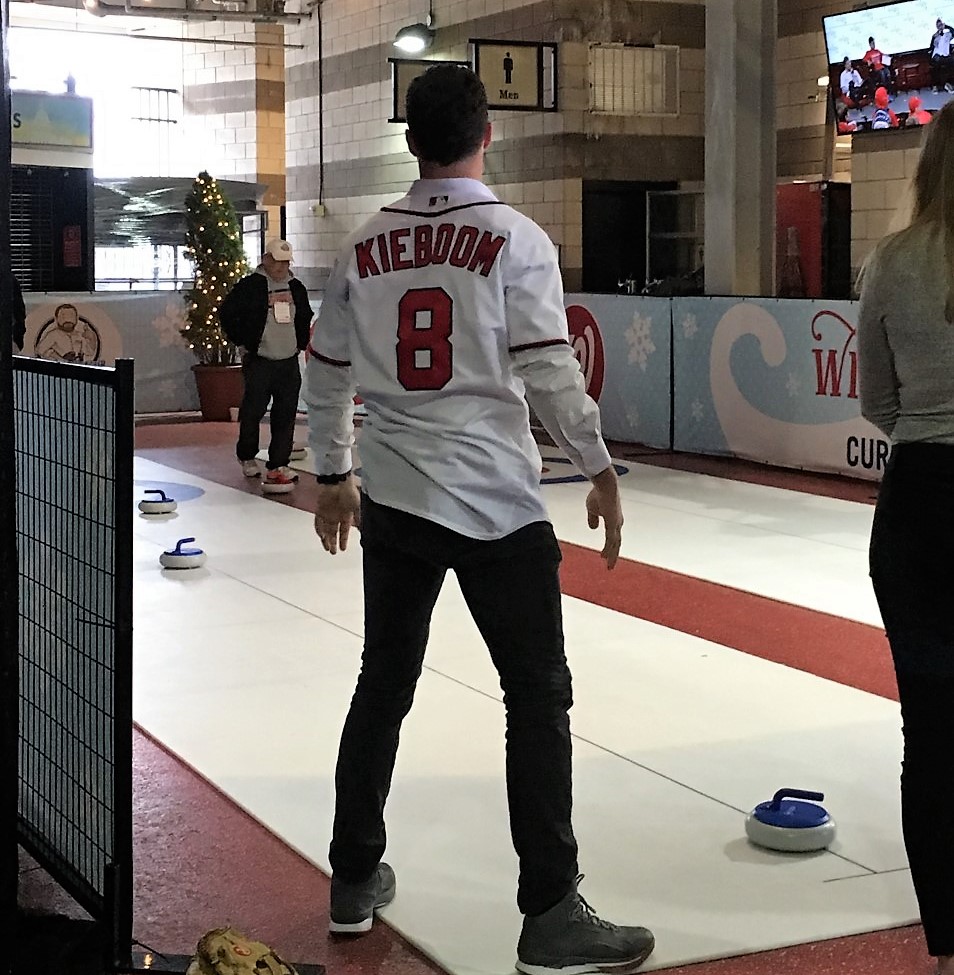 Nationals were also doing Select-a-seat (note the colored seats in the photo). 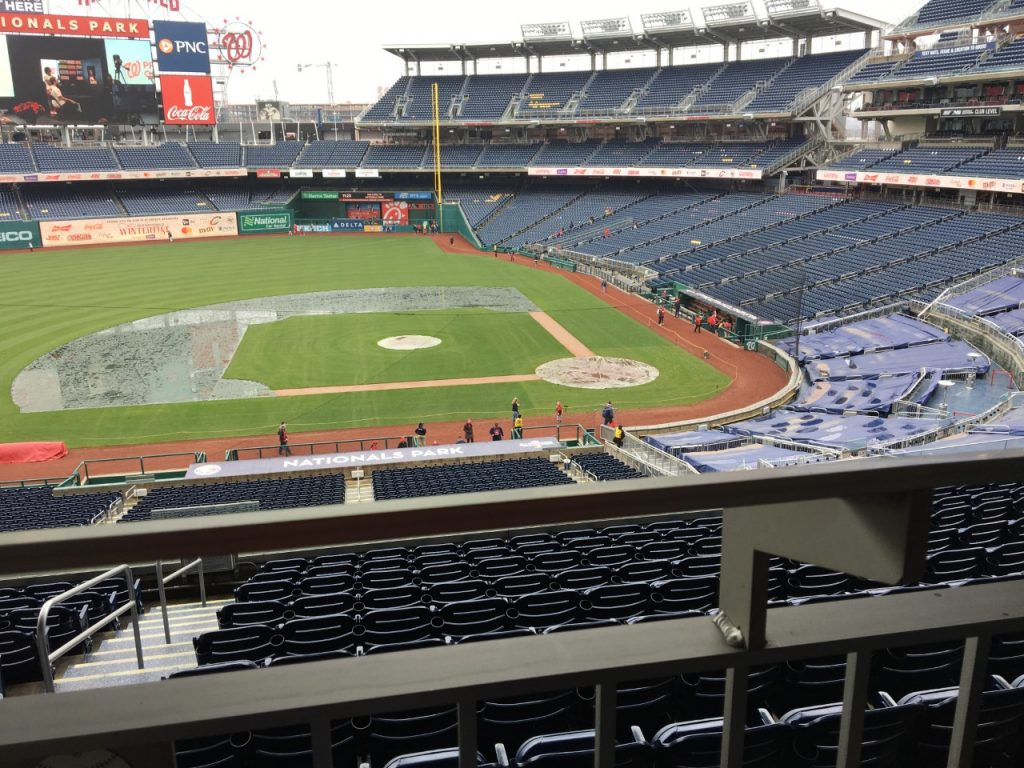 Juan Soto passed me trotting from session to session, but he stopped to high-five a two-year-old. At least this Soto stood still! 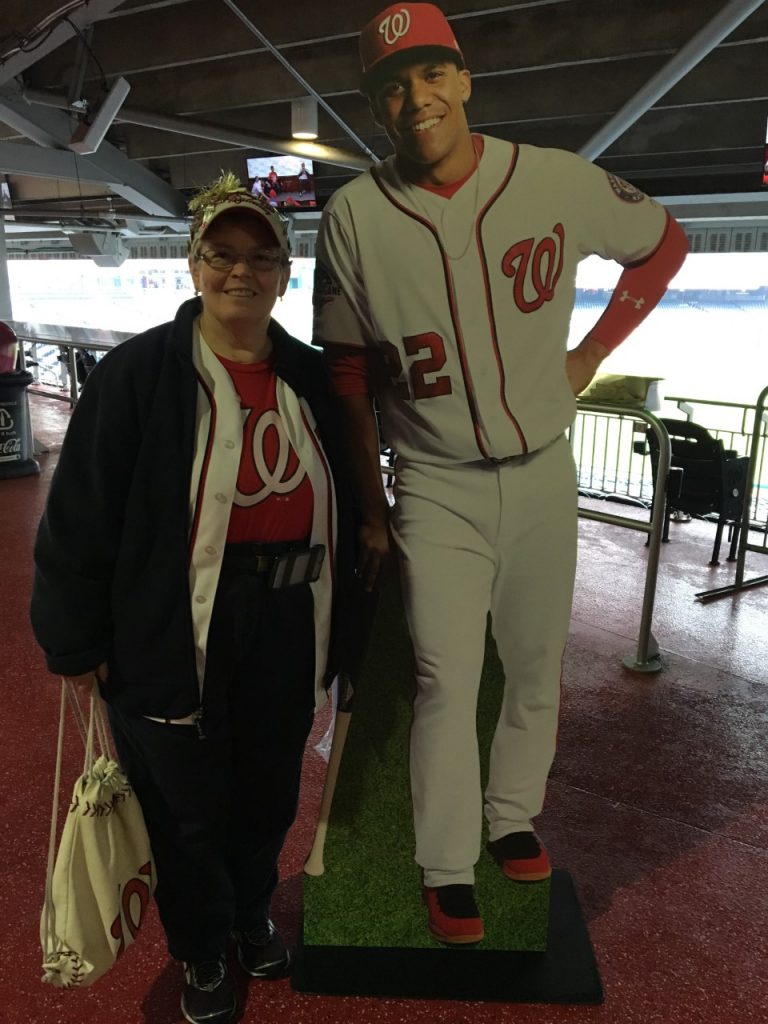