It isn’t how you start — it is how you finish! 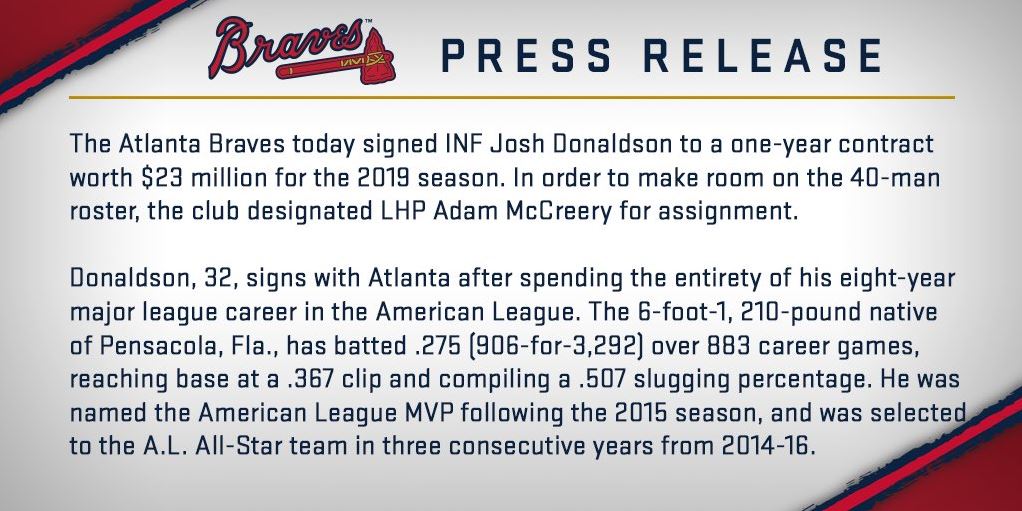 Some media reports got the fans riled up after the Braves signed two former star players as they acquired Brian McCann and Josh Donaldson. All the Nationals did today was add right-hander Henderson Alvarez to a minor league deal with an invitation to spring training to go with previous signings this off-season of Kyle Barraclough, Trevor Rosenthal, and Kurt Suzuki. Until the off-season is over and the regular season ends, why get upset about what other teams are doing in November. If Nats fans are getting agitated over Josh Donaldson who was injured for over 2/3rds of the season, then what will they do if Bryce Harper signs with the Philadelphia Phillies? Calm down.

The Nationals have already committed more money this off-season than the Braves and Phillies. While the Phillies owner already committed to spending money and being a little bit stupid about it — slow and steady usually wins the race.

“We’re going into this [off-season] expecting to spend money, and maybe even be a little bit stupid about it,” Phillies principal owner John Middleton said two weeks ago.

So far, the Phillies have done no spending rather they have been reportedly shopping a few of their own players like Pat Neshek, Tommy Hunter and Carlos Santana for potential trades.

While the Phillies, Braves, Mets and Nationals are all in “buy” mode, they are not operating in a vacuum rather they have competition for the top players. As always, signing free agents is the classic marriage scenario where you can date, get engaged, but you can leave each other at the altar. In sports, it happens all the time. The Yankees have reportedly expressed their desire for a face-to-face meeting with Manny Machado. There is only one Manny Machado. There is only one Bryce Harper. There is only one Patrick Corbin. In baseball, it takes more than one star player to win the World Series. The Yankees did not win all of those World Series with just Derek Jeter and a bunch of scrubs. Rather Jeter was flanked by other star players and several good players.

Remember, it isn’t how you start — it is how you finish!