The Arizona Fall Leagues ends on a walk-off; Carter Kieboom raised his stock! 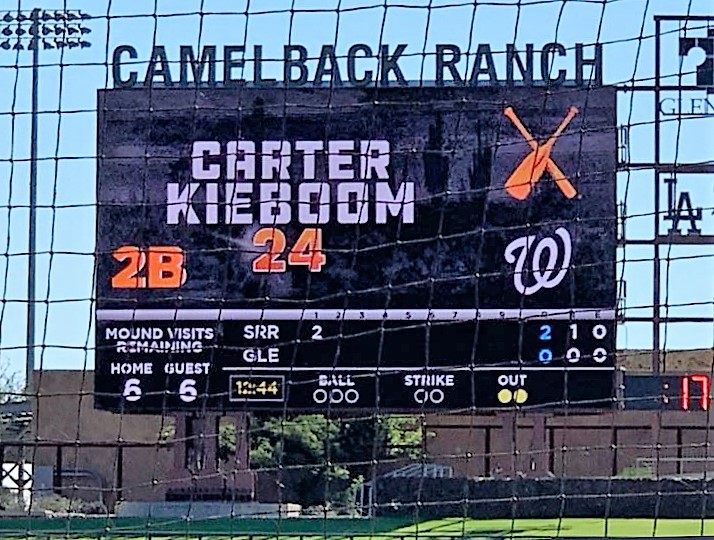 Photo by Brian Smith for TalkNats

The Arizona Fall League ended with a walk-off home run in the championship game. It was a good showing by many prospects, and Carter Kieboom stepped up in the league as a Fall Star and in the championship game reaching base twice in four plate appearances showing his ability to get on-base. In the final stats, Kieboom was a stand-out this year in the league. He was seventh in on-base-percentage at .427 behind only Tyler Nevin, Ryan McKenna, Abraham Toro, Cole Tucker, Lucius Fox, and Daz Cameron, and he finished five spots ahead of the top prospect in baseball — Vladimir Guerrero Jr.

If you watched any games on MLB Network, there were several mentions of Carter Kieboom in comps to Houston Astros All-Star 3rd baseman Alex Bregman. That is high praise. Like Bregman, Carter Kieboom came up as a shortstop and was blocked in the Major Leagues. Bregman was moved to 3rd base and finished 5th in the MVP vote in just his second year in the MLB. Bregman certainly has shown more power than Kieboom, but both have shown the ability to get on-base and come through in big spots.

Going into Spring Training, the Nationals top prospect should be Victor Robles with Kieboom behind him. Many expect that Carter Kieboom will make it to the Majors during the 2019 season. With the left side of the infield sewn up with Anthony Rendon and Trea Turner, it looks like Carter could fit in at 2nd base if the Nationals do not upgrade the position as the depth looks like Wilmer Difo and Howie Kendrick for now. Kieboom played several games at 2nd base along with his natural position at shortstop in the Arizona Fall League. In fact, Kieboom played 2nd base in the championship game yesterday.