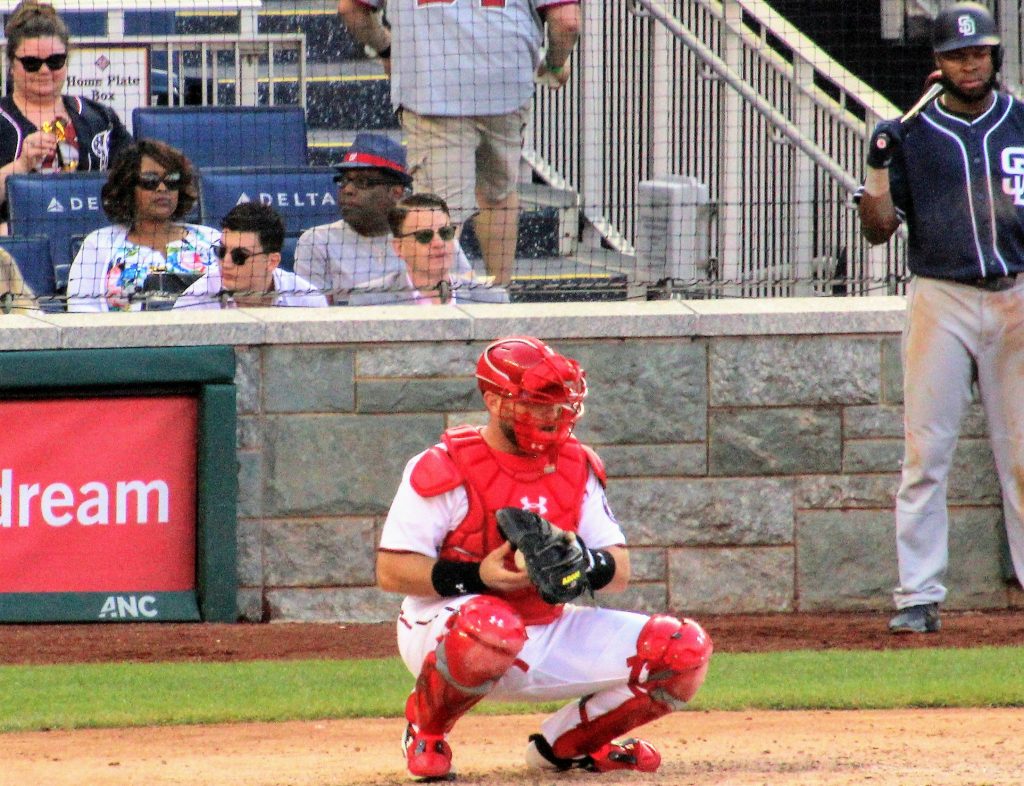 With Matt Wieters declared as a free agent, the Washington Nationals have been in “search” mode for a frontline catcher. We can cut and paste our early October article on the subject as Mike Rizzo made this clear at that time it was a priority.

“A frontline catcher is a guy we should target and go after,” Rizzo said. “It’s a huge position defensively, first of all. It’s a guy who controls the game, and I think you saw when Wieters went down, the way the pitchers threw to the catchers was as important as any type of offense you’re getting from the catcher position.

“To me, the best catchers in the game handle the pitching staff. They’re pseudo-pitching coaches on the field. They’re guys that call a game, prepare for the game, and then offense is the cherry on top of the sundae. It’s a position of need. It’s a position that we’re gonna have to target and go after next year.”

Yesterday at the General Manager’s Meetings in Carlsbad, California, Mike Rizzo reiterated that a frontline catcher is a priority. He added some footnotes to the type of catcher he is looking for which is a catcher who can log 120 games or more behind the plate. If that statement makes you a little uncomfortable, it should. Part of the issue with Wilson Ramos’ tenure with the Nationals was that he was pushed to be an iron man and his time with the Nationals ended with a serious knee injury during a meaningless rainy September game in 2016 which lost Ramos for the postseason.

Rizzo said the Nationals are hunting a “frontline catcher,” a guy who can catch 120 games or more. Continue to be interested in Realmuto, but “we’ve been talking about him for a year” and nothing has gotten done. Marlins asking price remains high.

The issue with pushing catchers in too many games is you usually get diminishing returns as you saw with Grandal, but truth be told, Grandal’s season was up and down. In the first half Grandal batted .251 and .226 in the second half. Grandal was 4-33 (.121) in the 2018 postseason and had some questionable defense. While Grandal never complained, it is very possible he was dealing with “dead” legs that distance runners can tell you all about. Most catchers do not talk about dead legs, but it is a common issue when catchers are overused. It calls into question why a G.M. with modern analytics would publicly say he wants a catcher to go 120 games or more.

The Nationals depth chart of catchers consists of Spencer Kieboom, Pedro Severino, and Raudy Read. While those pickings seem slim, the Nationals through attrition dug deep in their farm system and plucked Spencer Kieboom, and he finished strong for the Nats batting .375 after September 10th with a 1.108 OPS and a +0.6 WAR on the season.

You can expect Mike Rizzo to upgrade the catcher position through a trade or free agency, and this is a good market for free agent catchers this year. Previously, the Nationals were tied firmly in trade rumors to Miami’s All-Star catcher J.T. Realmuto and nothing ever seemed close to getting done as the rumored asking price was too much. Could the Nationals shake that palm tree on Realmuto again?

There you have it — again — from the general manager’s mouth. A frontline catcher will be an acquisition target. While it’s no surprise, it is your confirmation that Rizzo will be looking outside for a #1 catcher leaving the team’s #2 catcher’s spot it would seem to Spencer Kieboom who is already working this off-season on his defensive skills. According to Baseball Prospectus, Kieboom’s defensive skills were above average on blocking balls, but slightly below average on pitch framing as you would expect with a pitching staff he had little hands-on experience with. Overall Kieboom was a -0.3 FRAA-ADJ which was well ahead of Wieters’ -2.3. Overall, the Nationals catchers ranked 6th from the bottom as the worst offensive catching group in the Majors at a .624 OPS, and while it’s hard to believe, there were actually 5 teams worse than the Nationals — it is a fact. The worst offensive team from the catcher’s position was actually the Boston Red Sox who won the World Series with catchers Christian Vazquez and  Sandy Leon who helped place the Red Sox as a Top 3 team in catching defense.

There is also a lot more to catcher defense than the stats you can read. It also includes how a catcher calls the game and handles the pitching staff, and those are catching intangibles. All of that says Rizzo will want a defensive minded catcher and Yasmani Grandal leads that list on the available free agents. Back on the market as a free agent is also Wilson Ramos who handled the Nats pitching staff perhaps better than anyone. He caught Jordan Zimmerman‘s no-hitter and two from Max Scherzer. Ramos finished his 2018 season with above average defensive stats splitting time between Tampa and Philadelphia.

The issue with Ramos is his health. He has chronic tight hamstrings, and has had two knee surgeries for torn ligaments. He would probably fit best in a Nats system where he only plays three to four games a week, but because he is such an offensive weapon, previous managers will sometimes lean on him too much and not rest him enough.

An intriguing candidate is Martin Maldonado. His defensive stats have always been good, and he won the AL Gold Glove last year. He was traded to the Houston Astros mid-season which has given him some much needed postseason experience that he didn’t receive while with the Angels or previously in his career. Another catcher turning heads is Erik Kratz who has stepped up for the Milwaukee Brewers in some big spots in the post-season. Kratz will turn 39 next year but has been used sparingly over the years and he just turned in one of his best seasons defensively.

Here is an extensive list of free agent catchers with offense, defense, and WAR stats: 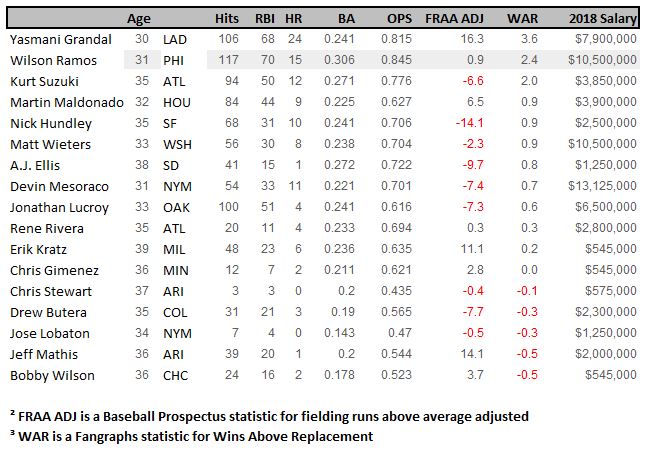 There are other intriguing names on that list like former-Nat Kurt Suzuki whose defense has regressed, but a player who saw a resurgence in his offense in Atlanta the past two seasons. Suzuki turns 36 years old next season, but certainly seems like he will be looking to play next season.

There will be plenty of competition for catchers this off-season as Houston and the Dodgers could top the list. It has been rumored that the Dodgers would like to re-sign Grandal. The last time the Dodgers had a prominent free agent looking at the Nationals it was closer Kenley Jansen who returned to the Dodgers for less money than the Nationals offered. If the Nats pursue Grandal, that could happen again.

For Ramos, he was clear that he would consider a reunion with the Nationals if they were to acquire him. That was actually rumored to be in the Nationals plans for a trade in July before the Phillies landed him.

“…If I would go back to the [Nationals] I would be happy because I have good memories of that team and very good relationships with my teammates, and the whole organization,” Wilson Ramos said.

While Wilson Ramos could not receive a Qualified Offer, Yasmani Grandal did which adds the harsh penalties for a team above the ‘Competitive Tax Threshold’ like the Nationals that makes Grandal an even more complicated deal if the Nats sign any Qualified Offer player like him or even Patrick Corbin, they would lose their second- and fifth-highest selections in the 2019 Draft as well as lose $1 million of international bonus pool money. If the Nats signed a second player, they would lose multiple draft picks as they would also forfeit their third- and sixth-highest remaining picks as well.

With cash constraints and signing penalties, in the end, Mike Rizzo could try to make a trade as several teams are in sell-mode.

This entry was posted in MikeRizzo, Ramos, Roster. Bookmark the permalink.
← Previous Article | Next Article →