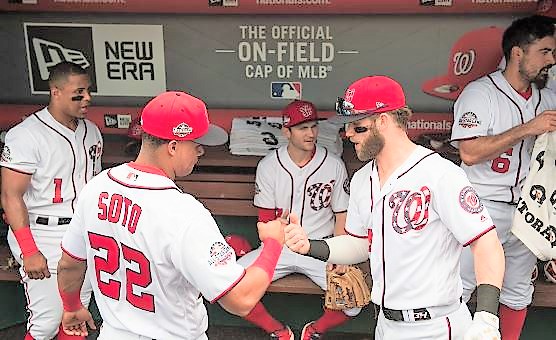 There are multiple dynamics in the works here today. The Nationals have been offense-deprived as they have not scored a run in 18-innings since they tallied a 3-spot on the Phillies to win an exciting come-from-behind game on Sunday. The Nationals are also in a starting pitching slump with only Max Scherzer doing his job.  Some think the Nationals are in an emotional slump — and that is subjective and open to interpretation.

Mike Rizzo appeared on his 106.7 radio show this morning and was asked about F.P. Santangelo‘s tweet (below) about the team’s lack of emotion lately in the dugout.

Everyone tweeting about Romo yesterday. Most important takeaway from that for me is… if the #Nats play with the kind of emotion they showed after the game, during the game, they’ll win the division

“I think the team plays with a lot of emotion,” Mike Rizzo responded. “They’ve been energized. They’ve hustled. They’ve played very very hard and worked very hard. The only way I can answer that is to the naked eye to the fans perspective — in the broadcast booth — in the GM box — and in the stands — when you are getting two to three hits a game, it’s hard to look like you’re playing very very hard and you have emotion. If you zero into that dugout and the comeback we had against the Phillies and the 1-0 loss that Max pitched the other day, you look at the dugout there isn’t a player in the dugout who is sitting and not on the top stair of the dugout and engaged in the game…We’re going to swing the bats. We’re going to score runs. We’re going to show the energy that people perceive is not there now.”

Thanks for that Mr. Rizzo, but what can you do as the GM where the bottom of the order sometimes seems like a black hole and the middle of the starting rotation has had innings so long it’s like watching paint dry, and it inevitably takes your own players out of the game.

Speaking of innings so long, Tanner Roark faced the Phillies six-days ago and had a 29-pitch first inning, and a 29-pitch third inning and Roark continues to struggle against the top of line-ups yet he sails through the bottom of line-ups. The Nats lost that game 12-2 with Roark only pitching 4 1/3 innings while giving up 6-runs. Roark looked very similar his start before this. Here is to hoping that Tanner Roark has figured something out as his team needs him.

The Phillies will start the right-handed Aaron Nola who has been one of the Phillies best pitchers (2.58 ERA) and he follows Zach Eflin who shut-out the Yankees last night in a 7-inning gem. Nola has had a 3.91 ERA in June so he could be showing some mileage on his arm.

If the Nationals want to win today, manager Dave Martinez has to monitor Roark closely and if needed a quicker hook to get it to the Nationals much-improved bullpen.