The NL East has really changed in appearance since Friday the 13th of April when the New York Mets were 11-and-1 and in first place by 3½ games. Their fans were discussing shock and awe and printing 2018 NLDS tickets back then. It’s the reason we play the games. Since then the Braves and Phillies have both shown that they are legitimate contenders and expect both of those teams to make some trade(s) to bolster some of their weaknesses. The Washington Nationals are in 1st Place technically by a .002 winning percentage because the Braves have completed two additional games.

Unfortunately for the New York Mets, they are 16-and-31 in their last 47-games, and they look to be sellers come the trade deadline if they continue their slide. Their most valuable trade chip is Jacob deGrom and if you trust Jon Morosi’s tweet, they won’t be trading deGrom.

Jacob deGrom isn’t likely to be available on midseason trade market, even though #Mets are tied for @MLB’s worst record since May 1. deGrom won’t be a free agent until after ‘20; #Mets believe they can make playoffs again in that window. @MLBNetwork

The NL East weekend match-ups are the Braves driving up the road to Los Angeles on I5. The Dodgers who are hosting the Braves have to fly coast-to-coast tonight as they are playing in Pittsburgh. Lucky for the Braves is that the Dodgers bullpen is being stressed to the max as they are pitching a bullpen game today. The first place Brewers play at the Phillies this weekend and the Mets and Yankees have a Subway Series this weekend. The Washington Nationals have the San Francisco Giants in town and they look much different from a month ago. They only have 3 players on the DL and Brandon Belt had an appendectomy and won’t frustrate Nats pitchers this weekend, however Brandon Crawford is now one of the hottest hitters in baseball. The Nationals are on a 4-man rotation which will line up:

The Nationals could decide this weekend to activate Adam Eaton off of the 60-Day DL which will require a roster move off the active roster and the 40-man roster. Speaking of roster moves, the once suspended Seth Romero as we reported is scheduled to start tonight for the Nationals Low-A Hagerstown Suns and he is listed on their website.

As the Nationals approach 100 games remaining on the season this weekend, here is your Nationals WAR leaders 1-to-20. No shocker to see Max Scherzer at the top or even Trea Turner leading the position players. What is a shocker is how Bryce Harper has been moving backwards. 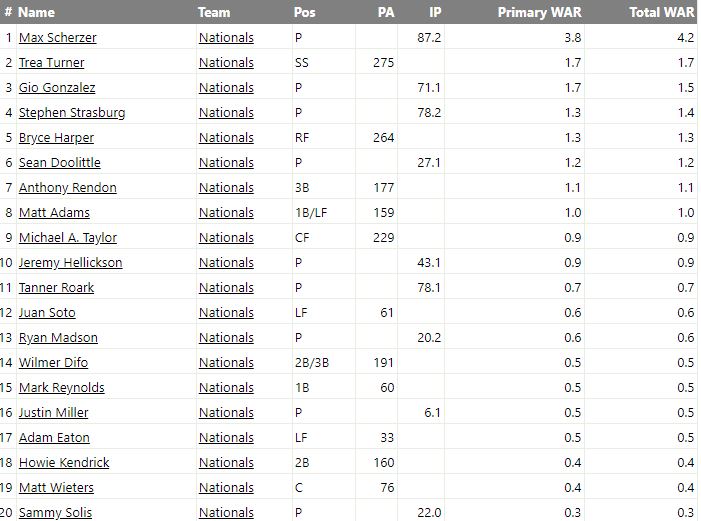 What could be of interest on Fangraphs WAR ratings of our Washington Nationals is all of the players listed at the bottom who have been DFA’d or optioned back to the Minor Leagues or sitting on the DL. In larger sample sizes, Pedro Severino has fallen back to a 0.0 WAR and his back-up catcher Spencer Kieboom is at a -0.2 which is a small  representation. You can peruse the rest of the list to find Ryan Zimmerman, Brian Goodwin, and Shawn Kelley. No bueno. You have to wonder who stays and who goes when other DL players return. 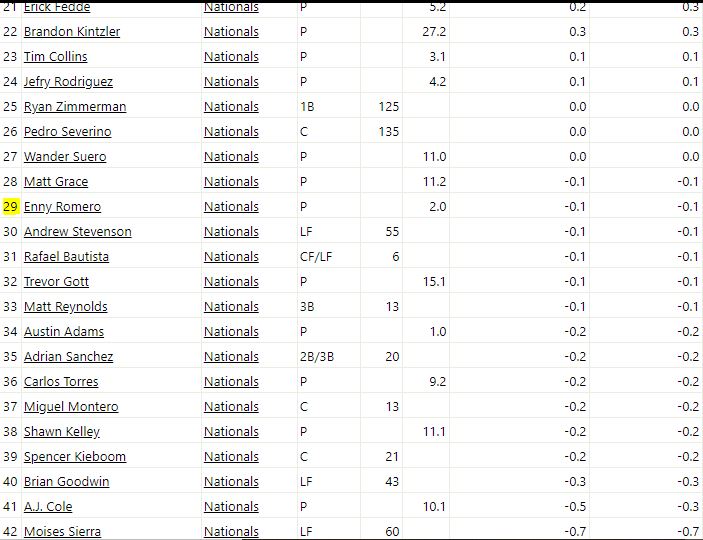 The big question after Adam Eaton returns will be about the health of Jeremy Hellickson, Daniel Murphy, Ryan Zimmerman, Matt Wieters and Victor Robles. When the band is back together, the Nationals will have to decide if there are any deadline trades they can make.

This entry was posted in NLEast. Bookmark the permalink.
← Previous Article | Next Article →