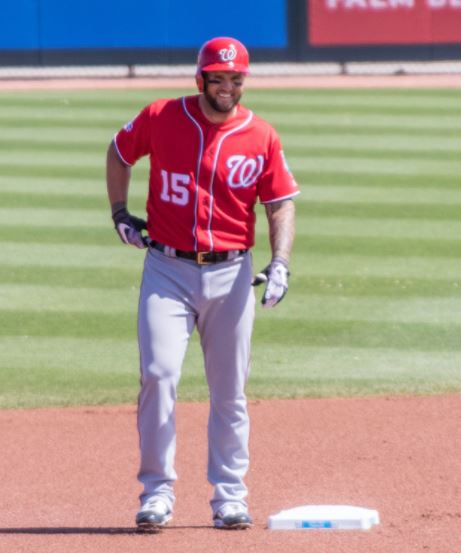 Photo by John Caulfield for TalkNats

This game started hot when Trea Turner in the 2-hole crushed a home run over the centerfield wall for the early lead, but the Padres tied it up in the 4th inning 1-to-1. Then the Nats blew the game open with 5 RBIs by Matt Adams powered by two home runs and  Anthony Rendon  added two doubles, and Trea Turner did it all tonight scoring 3 runs. Strasburg went a full 7 innings throwing 109 pitches giving up 3 runs. The Nats bullpen was shaky which made the final score 8-to-5 pushing the Nats to 2 games above .500 and 1 1/2 games within first place.

“I’m happy to be a part of this team,” Matt Adams said.  “And I’m playing every day, so I’m going to ride it out. Sticking with the plan — getting a good pitch and hitting it.”

When you say a player is hot, statistically it has different meanings. Matt Adams is smoldering hot. He has eight home runs in his last two weeks and is slashing .421/.511/1.079/1.590 in that same timeframe. The player who the Atlanta Braves controlled was kicked to the curb in the off-season because they did not have space for him due to Freddie Freeman‘s spot at 1st base. Mike Rizzo scooped up Adams as a free agent to replace the older Adam Lind. The fan base was split on the move at the time, and now you can expect all the fans to be on the ‘Big City’ bandwagon.

“He’s really, really good right now,” Davey Martinez said. “He’s having fun. He loves it here, and he’s having fun and it shows on the field. He’s going to keep it going. I know he is because he’s doing all the right things.”

The only dilemma now as we discussed yesterday is how Matt Adams will get his playing time in order to keep it going. Adams has only had 75 at-bats this season, and he has now clubbed 10 home runs. His batting average is .307 and his OPS is 1.169.  One of Adams home runs tonight was off of a left-handed pitcher. He is locked in so well right now that he could hit anyone. In addition to Adams bat, the also flashed the leather making a diving stab down the line robbing an extra-base-hit while having to race to the bag because Strasburg did not cover. Adams slid to the bag to complete the WebGem a split second before the runner touched the bag.

The game featured spectacular defense by both teams which left many players frustrated and none more than Bryce Harper who was robbed of a sure extra-base-hit off the wall that was a 107mph laser. Harper was robbed twice of hits, and stung another liner early in the game that Travis Jankowski was positioned perfectly for.

Stephen Strasburg is not the only Nationals player with ties to San Diego. Trea Turner was a first round draft pick of the San Diego Padres in 2014 and was traded as the infamous PTBNL with Joe Ross to the Nationals in that blockbuster trade for Steven Souza. Because of DL stints, this was Turner’s first game he would play in Petco Park to go with the many games he played against the Padres in Nationals Park. Turner did it all in this game with his many tools on display with his power, speed, and defense. Turner’s slash against the Padres in 8-games is now .346/.414/.731/1.145.

“I think any time I play [the Padres], it’s a reminder that I was there,” said Turner. “Not that [the trade] was my decision, but no regrets about anything. Everything has worked out great for me individually, and I’m happy to be part of this team.”

As well as the Nationals played, the bullpen was not dependable. Trevor Gott took the ball in the 8th inning with a 5-run lead. Immediately he put runners on 2nd and 1st base via a hit-by-pitch and a walk. Luckily Gott got it together and did not allow a run to score. For the 9th inning, Carlos Torres took over and he started off the inning the same way as Gott. Both of those runners scored via singles making it a 3-run lead, and manager Dave Martinez was forced to warm-up Sean Doolittle. Torres labored through the 9th inning and fortunately finished it up at an 8-to-5 game.

The Nationals have now won 8-of-their-last-9 games and are getting players locked-in. Strasburg improved his professional record to 3-and-1 while pitching in San Diego.