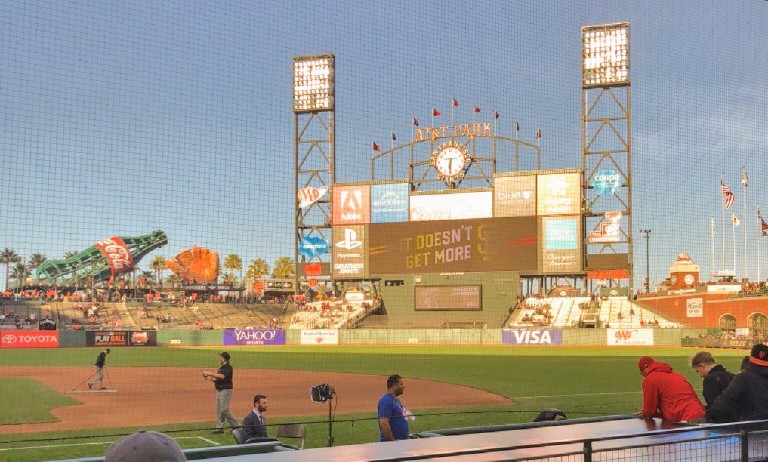 When opportunity knocks, you have to take advantage. The Nats had chances from two Giants errors that put men on 3rd and 2nd with one out and couldn’t score a run. They lose 4-to-2 and fall three games under .500 as the Nats have now only scored 5-runs in this 3-game losing streak. The team was 0-for-7 in RISP and Matt Adams left 5 men on-base. There were 10 Nationals baserunners in this game proving that there were plenty of opportunities to drive in runs.

What started off looking so good for the Nationals turned to the frustration they have felt for the month of April where they just could not piece together hits. The Nationals put 10-men on-base and just needed the big hit which never came in back-to-back at-bats. In the top of the 6th inning, Ryan Zimmerman reached via a 2-base error pushing Bryce Harper to 3rd base. With one out and two in scoring position, the Nats needed just a productive out to tie the game with Matt Adams at-bat. A hit would score two runs. It was not meant to be as Adams walked back to the dugout via the strikeout and Matt Wieters with two outs flew out to centerfield.

“That was the big turning point of the game,” Dave Martinez said after not scoring in the 6th inning. “If that happens [and we score], we do something different in the bullpen, and unfortunately, we didn’t knock those runs in.”

To start the bottom of the 6th inning, Gio Gonzalez walked the lead-off man and was immediately yanked. Shawn Kelley entered the 6th inning in a game where the Nats had a 2-to-1 deficit and on the first pitch he threw it was crushed for a 2-run home run 464 feet into the night. Kelley exited with ulnar nerve irritation and will head to the DL. The rest of the bullpen was excellent with Sammy Solis, Trevor Gott and Carlos Torres.

Gio Gonzalez could only get through 5.0 innings and had 3 earned runs on his pitching ledger. He started the game on an efficient 8-pitch first inning but it was downhill from there with long innings and Gio walked the lead-off man 3 times in this game.

One of the bright spots in the game was the continued success of Trea Turner and Michael Taylor stealing bases. Both players stole bases tying them for the team lead of 9 stolen bases a piece and neither has been caught stealing. The value of those steals has been a big positive on this season. Each of them are on a 70+ stolen base pace.

Baseball is a game of learning and Wilmer Difo tried to cut a runner out at the plate and was not successful. Davey Martinez admitted after the game that was a mistake. That seemed to be a divergence for Davey who has seemed to go out of his way even in obvious poor decisions to stick up for his player and even his own decisions.

Speaking of decisions, there were a few to be made in the game that could have changed the outcome such as in the 5th inning with 2-outs and a man on 2nd base, Gio pitched to Buster Posey who laced an RBI single away from the shift. In hindsight with first base open, Davey could have put up 4-fingers for the intentional walk and allowed Gio to go after Evan Longoria. That run made the game 2-to-1 in favor of the Giants.

If you saw Martinez in the post-game, you could read the stress on his face. He tried try to pull some positives out of the loss.