Almost all of the #Nats non-roster invitees are gone! 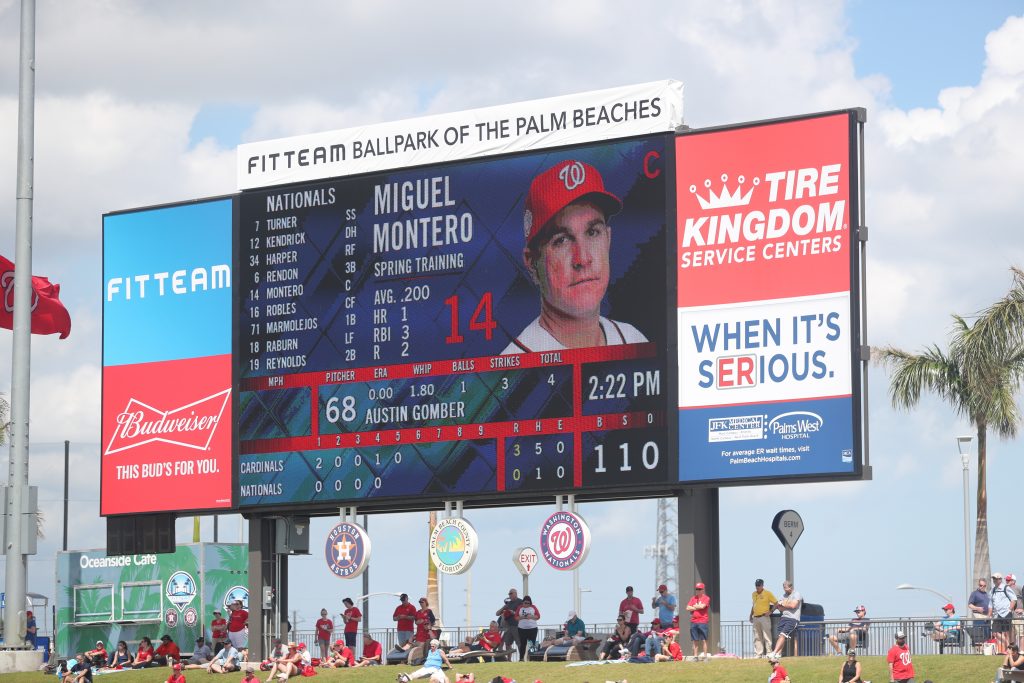 Yep, it appears catcher Miguel Montero has made the team. (Photo by Sol Tucker for TalkNats)

The Washington Nationals have cut their list of non-roster invitees down from an original 21 to two (one of whom wasn’t even originally part of that list!) with a series of moves today meant to streamline their slate of players heading into the last partial week of the preseason and the start of the regular season on Thursday.

Most NRIs have been re-assigned to minor league camp. Some will likely opt out and elect free agency in the coming days. Most will likely remain in the organization, if not for the entire season then at least for part of it. Free agency was unkind to fringe players this winter, and it is possible that more former NRIs than usual will decide to stick with the organization that signed them, even if they have the right to opt out of their minor league contract next week or later next year.

Released today: veteran outfielder Ryan Raburn and infielder Reid Brignac. Raburn spent most of 2017 with the Nats as a passable but ultimately replacement-level left fielder, filling in for the injured Jayson Werth. Brignac was trying to make his fourth National League East team but ultimately found himself on the outside looking in on a competition for two utility infielder bench spots in which Wilmer Difo, Matt Reynolds, and Adrian Sanchez always had a leg up.

Still not on the Nats’ major league roster, but expected to make the team either immediately or at some point in the not-too-distant future: veteran catcher Miguel Montero and starting pitcher Jeremy Hellickson.

Montero was reportedly told today he will make the Nats’ Opening Day roster, as was widely expected. He will back up Matt Wieters while providing a left-handed power bat to start against some right-handed pitchers.

Miguel Montero has been informed he has made the team. He will be the Nationals backup catcher

Hellickson is expected to be left off the Opening Day roster, with rookie A.J. Cole announced Friday as the team’s fifth starter, but unless he struggles significantly while ramping up his workload as a starter, he seems likely to find his way into a role with the major league team before becoming eligible to opt out of his contract on May 1.

Other moves have solidified Montero and Cole’s spots on the team. Top prospect Erick Fedde was optioned to the minors earlier this week, removing Cole’s main rostered competition for the fifth starter job. Pedro Severino, once a promising Nats prospect who has struggled to hit more advanced pitching, was optioned today to officially resolve a backup catcher battle that had seemingly long since been decided.

The Nats have made the following roster moves:

We can now project an Opening Day roster that includes these 18 players:

The Nats have not entertained speculation that the following two players may be injured, but it seems reasonable to wonder whether they could open the year on the disabled list for different reasons:

Kelley has given up five home runs in his last three innings after returning from a brief absence he and the team would only describe as “personal”. The Nats have not suggested he may be injured, but Kelley missed most of last season on the disabled list, and his season ended with an elbow injury for which he elected to receive a stem cell injection in lieu of surgery. Right now, he’s expected to be in the Opening Day bullpen, but one wonders whether the Nats might see some physical issue behind his struggles.

Zimmerman has been the missing man this spring, appearing in just one game in which he batted as the designated hitter while also dealing early on with an undisclosed ailment characterized as “general soreness”. He and the team insist he is getting plenty of work in on the back fields in minor league games, a decidedly unusual approach to spring training for a veteran. He was supposed to appear in Grapefruit League games this week, but it now appears the soonest we might see him face major league pitching is in a tune-up game Tuesday at Nationals Park:

Also, Ryan Zimmerman will NOT be in tomorrow’s lineup, but Davey said there’s a good chance he’ll play Tuesday in D.C.. So two more days of panic for all.

Zimmerman dealt with plantar fasciitis that caused him to miss significant time in 2015. The condition, which causes moderate to severe foot pain, is known to recur, especially in athletes. While he said it was under control in 2016 and certainly didn’t appear hampered by it in 2017, it’s not out of the question that it has flared up again and prompted this strange training regimen. The Washington Post‘s Chelsea Janes suggested that by playing only in minor league games, in which the rules are highly flexible, he may be minimizing the amount of time he has to spend on the field while still taking some at-bats and working on his timing. Time will tell if he is ready for Opening Day. The Nats say they are planning for him to be in the Opening Day lineup. But as we have learned with Zimmerman, anything is possible.

Vying, in all likelihood, for five remaining roster spots:

Right-handed relievers Joaquin Benoit and Koda Glover are expected to open the season on the disabled list. So is infielder Daniel Murphy, who would otherwise be the team’s starting second baseman with Kendrick on the bench. Hellickson doesn’t have to be re-assigned since he was signed to a minor’s deal with no official invite to big league camp, but it seems unlikely he will make the roster only to work out of the bullpen when the Nats signed him to be a potential fifth starter.

With Kelley, the Nats have four relievers locked into their bullpen, leaving three or four spots for Solis, Gott, Romero, and Grace. They could either opt to carry two of Sanchez, Difo, and Reynolds, or just one of them — in which case Difo, based on his past time with the Nats, would seem to be the clear frontrunner; Reynolds, though, can play first base and has more experience in the outfield. The Nats haven’t decided yet, according to manager Davey Martinez.

It perhaps shouldn’t escape anyone’s attention that if Kelley and Zimmerman both miss the Opening Day roster, these seven contenders for the last roster spots could all make the team for a standard seven-man bullpen and five-man bench.

One more wild card remaining is the possibility that the Nats will scoop up one of the players around baseball who are being released at this point in the spring. Adding a veteran like Gordon Beckham, Andres Blanco, or Adam Rosales to the utility infield mix, or bringing in a veteran pitcher like Craig Breslow, Bartolo Colon, or Carlos Torres to bolster the bullpen, is still a possibility. The Nats did this most recently back in 2015, when they nabbed outfielder Reed Johnson for their bench after he failed to make the Miami Marlins’ Opening Day roster.

How will it all play out? We don’t know yet. But we’re a lot closer to clarity than we were at the start of spring training.