Brooks Robinson: The Greatest Defensive Player in Baseball History, at Any Position (1 of 7) 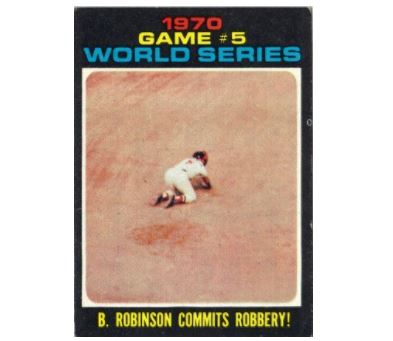 I am going to all-but prove to you that Brooks Robinson was the greatest defensive player ever to play baseball, at any position.

Robinson, who played 3rd base for the Baltimore Orioles from 1955-1977, was the Gold Glove winner for 16 consecutive years (1960-1975), and is not only the greatest defensive 3rd-baseman in history, he’s the greatest defensive player of all-time, at any position. At this point, you are fully justified in believing that trying to “prove” such a hyperbolic claim is nothing more than a fool’s errand.

I’m going to demonstrate this slowly, and methodically, using the 1970 World Series as the motif.

During this presentation, you will have – with a single click – every single play involving Brooks Robinson in the entire World Series, photographed and explained, and you’ll also be a single click away from the video. This persuasive essay took me perhaps one-hundred hours to complete, but it’s written so you’ll be able to finish it in about three hours of reading – I tried to make this as easy as possible for you, the reader.

All I ask of you, is that you read the entire presentation in sequence, like a novel – it is absolutely imperative that you read and view every single play involving Robinson, and then click on the video – the links will enable you to go directly to the precise spot, and you’ll know when it’s time to move on from each video segment.

At the end of this seven-part essay, you can have a complete mastery of everything Brooks Robinson did in the 1970 World Series, and you will fully understand my contention – even if you do not agree – that Brooks Robinson was the single greatest defensive player in baseball history, at any position.

In advance, I’d like to thank YouTube posters “stan phillips” (whose videos of Games 1-4 I use) and MLBClassics (whose video of Game 5 I use). If these videos ever disappear, this essay will need to be adjusted to whichever new videos take their place, but until then, this could not have been written without them, and both YouTube users have my genuine gratitude – the best way to repay them would be to subscribe to their YouTube accounts (I have no affiliation with them, and haven’t even made contact).

This seven-part serial is being jointly published on the premier Nationals Blog, talknats.com, and will also reside on our city’s premier restaurant resource, donrockwell.com, which features the largest single-city dining guide in the world. Although I grew up an Orioles fan in Silver Spring, and my heart will always be with their dynastic teams of the 60s, 70s, and 80s, my loyalty left with Hall-of-Famers Eddie Murray and Cal Ripken, Jr., and future Hall-of-Famer Mike Mussina – Peter Angelos put an end to that – and I’m now firmly in the Nationals’ corner, living a mere ten minutes from the stadium.

Thank you in advance for indulging me in what is going to be a labor of love, and hopefully the most convincing analysis of Robinson’s defense ever written.

Please note: This is a long piece that will demand several hours of reading, viewing, and close attention on your part (a friend estimated that she spent “about three hours” on it). The piece needs to be scrutinized, start-to-finish, like a book; to do otherwise will be a waste of your time, and will defeat its raison d’être. So screw your attention to its sticking place, steel yourself for the fantastic voyage that awaits you, and prepare to be immersed into the wondrous dunk-tank that is Brooks Robinson.

This entry was posted in Analysis and tagged Brooks Robinson, Defense. Bookmark the permalink.
← Previous Article | Next Article →