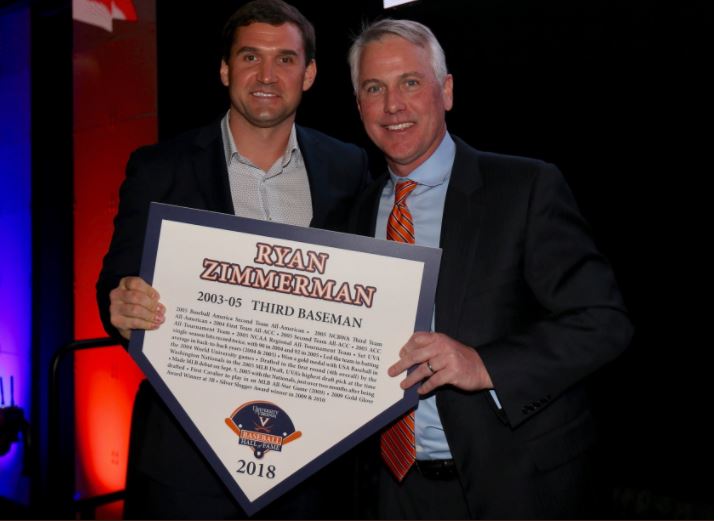 At the 16th annual Step Up to the Plate fundraiser dinner, the University of Virginia honored Washington Nationals first baseman Ryan Zimmerman and closer Sean Doolittle on Saturday night by inducting them into the baseball Hall of Fame. Zimmerman and Doolittle were among 15 former players and coaches who made up the inaugural HoF class. Both players were on-hand for the event, and they were presented with home plate shaped plaques that listed their accomplishments as players at UVA.

Ryan Zimmerman was the Cavaliers third baseman from 2003-2005. During that time, he was named a Baseball America Second Team All-American (2005), First Team All-ACC (2004), and ACC All-Tournament Team and NCAA Regional All-Tournament Team (2005). He set the UVA single season hits record in 2004 with 90 hits and again in 2005 with 92, he led the team in batting average in both 2004 and 2005, and he became the first Wahoo to play in the MLB All-Star Game when he was named to the team in 2009. Zimmerman has also been a major donor to the school’s baseball program which now boasts a field, dugout, and clubhouse that is of Major League quality.

Of the honor, Zim said, “Pretty cool that they finally did something like this. With the amount of guys that the program has produced, and the teams that they’ve had, and the stability that they have now, it’s good to honor the people that have been here in the past.”

Sean Doolittle was a pitcher and first baseman for the Hoos from 2005-2007. While with UVA, he was a three time All-American, the 2006 ACC Player of the Year, a three-time All-ACC selection as a utility player, named to the 2006 and 2007 First Team All-ACC team, the 2005 All-ACC Tournament Team, and the 2006 NCAA Regional All-Tournament Team. He left UVA as both the career leader in RBIs (167) and wins (22), and he established the single-season team record in walks in 2006 with 54. In 2014, he became the first UVA pitcher to appear in the MLB All-Star Game. 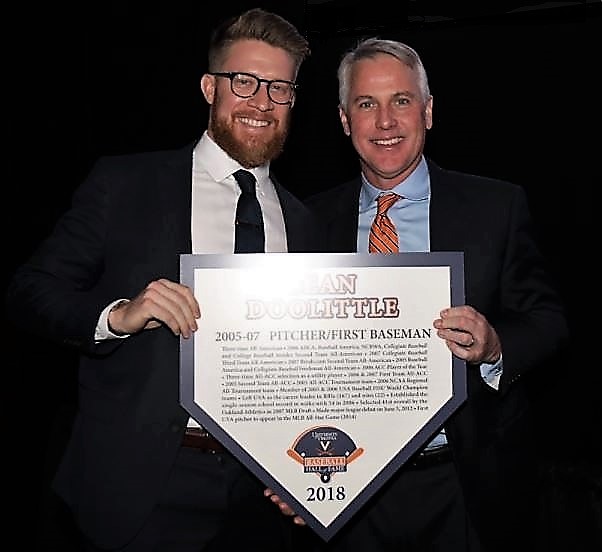 Zim, Doo, and the 13 other members of the inaugural HoF class will be enshrined in a special place in the newly renovated areas of Davenport Field, home of UVA’s baseball team. There will be a prominent display along the new right field concourse, which is scheduled to be completed by the time the 2018 season gets underway.

This entry was posted in RyanZimmerman. Bookmark the permalink.
← Previous Article | Next Article →