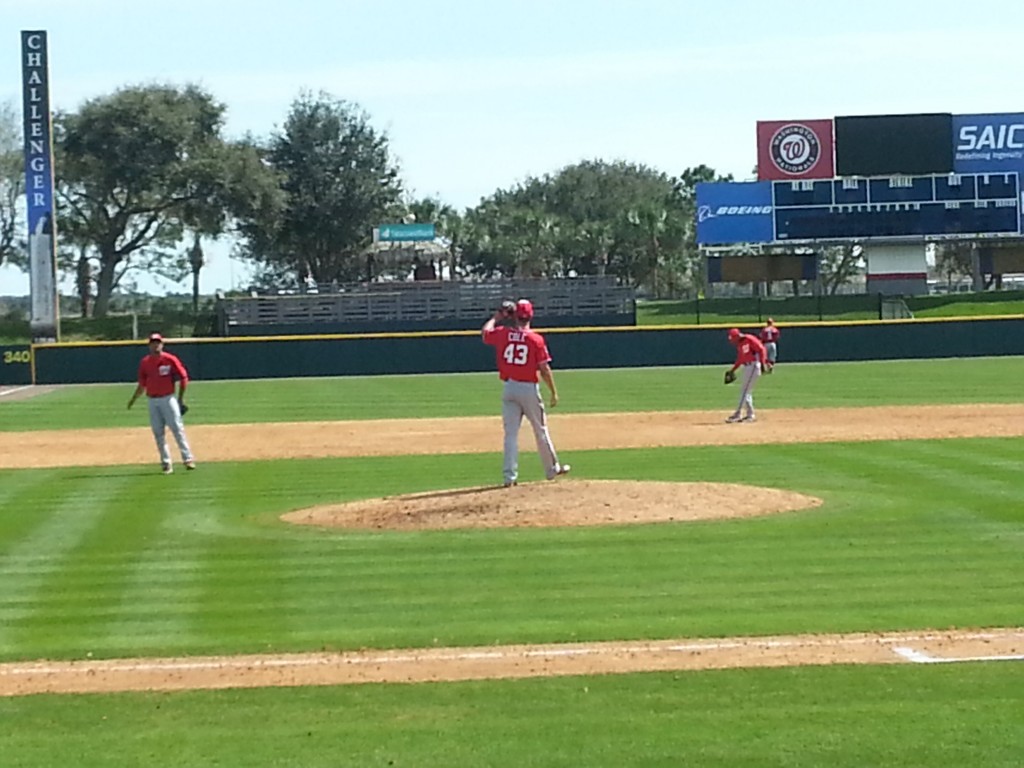 This is the week that the prospects lists are being posted. Baseball America named Victor Robles as their 5th best prospect in all of baseball, and Juan Soto is their 56th best prospect on that list. Robles projects to start the season in the Minors where he can play every day. Soto will begin the 2018 season in A-ball in the Minors.

In a flashback moment, there are several former top prospects who are pivotal players that today could complete the Washington Nationals 25-man Opening Day roster.  Some of those former top prospects with inside tracks are named A.J. Cole, Pedro Severino, Brian Goodwin, Wilmer Difo, Sammy Solis and Koda Glover. If you go back 5 years ago, Goodwin, Cole, and Solis were in the Nationals Top-10.

Here is how they were rated prior to the 2013 season and what was written about some of them from John Sickels:

2) Brian Goodwin, OF, Grade B+: Stellar tools and shows the skills often enough to make people drool, but he’s erratic. Dominated Low-A but struggled after jump to Double-A, which was not really surprising.

3) A.J. Cole, RHP; Grade B: Hammered in High-A, turned things around in Low-A and was still decently young for the level at age 20. Remains a very high upside arm with a chance to be a number two starter. Re-acquired from Oakland in Morse deal. It will be interesting to see how he adjusts to coming back to his old organization, but it seems to me that Potomac will be a friendlier pitching environment than the California League would have been and I am optimistic.

For giggles, look who the 20th prospect was 5 years ago:

Three years ago in 2015, Sickels rated the Nats prospects:

5) Joe Ross, RHP, Grade B: Age 21, another component of big trade with Padres although this one can be made official. 3.92 ERA with 106/29 K/BB in 122 innings between High-A and Double-A, steadily gaining command of power sinker, slider, change-up. Should be a workhorse.

7) Erick Fedde, RHP, Grade B-: Age 21, first round pick out of UNLV despite being on shelf with Tommy John surgery. Pre-injury, worked in mid-90s with a power slider and decent change-up, number two starter projection. We’ll have to see how he comes back from the injury.

11) Austin Voth, RHP, Grade C+: Age 22, posted 2.77 ERA with 133/38 K/BB in 127 innings, 89 hits between Low-A, High-A, Double-A. Scouts don’t like him as much as the numbers, seeing a back-end starter with an 88-93 MPH fastball and decent but not excellent slider and change-up. Pitchability adds to the package, however, and he could surprise the doubters.

12) Rafael Bautista, OF, Grade C+: Age 21, hit .290/.341/.382 with 69 steals in 487 at-bats in Low-A. Very fast, athletic but lacks big power potential and needs more polish on defense, often projected as a fourth outfielder. Something of a strange case, normally scouts drool over athletic speed players like this. He’s not too old for his levels but is often overlooked.

16) Raudy Read, C, Grade C+: Age 21, another catcher with sound defensive skills and a good arm, hit .281/.332/.462 in the New York-Penn League, greatly improved over his rookie ball production. Another candidate to leap the list.

So here we are, some of these players are no longer considered prospects based on age or rookie status, but each have the ability to live up to their original prospect ratings or exceed them. From the players named above, only Fedde, Severino and Read remain on Sickels 2018 list. Of course Victor Robles is the #1 prospect in the Nationals system.

Here are six names mentioned above who we could see on the Opening Day roster:

A.J. Cole – He is the versatile pitcher who could be the Nationals 5th starter or the long-man in the bullpen this season. This winter, Cole worked hard to strengthen his lower body and packed 10 pounds onto his frame. Cole had a 2.97 ERA in innings 1-to-4 last year, and in the 5th inning his ERA jumped to 9.00. If Cole can show he can get through the 6th innings of games, he can be the man Dave Martinez needs in his starting rotation. If not, Cole has shown that he can be a versatile piece in the bullpen.

Pedro Severino – Sevy projects to be the back-up catcher behind Matt Wieters. Severino went from being a promising prospect to a big question mark. He had a down year in Triple-A and showed very little when he had a chance on the MLB roster in 2017.

Brian Goodwin – BGoody really stepped up in 2017. He showed good plate discipline in Nationals Park but struggled mightily on the road. Goodwin in Nats Park batted .299 with a .967 OPS. On the road, Goodwin was just over Mendoza at .202. Goodwin’s season was cut short when he had a serious groin injury. Goodwin can play all 3 outfield positions, and slots best in left field.

Wilmer Difo – He had the same problem as Goodwin. Great numbers in Nationals Park where he batted .315 and struggled at .219 on the road.  Difo showed his versatility to play 5 positions in the field between the infield and outfield.

Sammy Solis – Sammy could make the roster as one of the lefties in the ‘pen. Solis had games where he looked great, but his issue was durability. Pitching in consecutive days, Solis yielded a .444 batting average and .333 with one-day’s rest. Compare that to when Solis had two-days rest or more and opponents only hit .194 against him. Solis also had a strong 2nd half of the season pitching healthy with a 2.41 ERA.

Koda Glover – He was an enigma in 2017. He was injured again during the season just as he looked to be “closer” worthy.  Glover has MiLB options and could be the one player who is yo-yo’d between Triple-A and the MLB roster as players are moved around. This is the year that Glover has to show he can stay healthy.

Of course projections can change. If Nationals general manager Mike Rizzo acquired a #3 starter, Cole would shift to the bullpen. An acquisition at catcher could also change the fate of Severino.