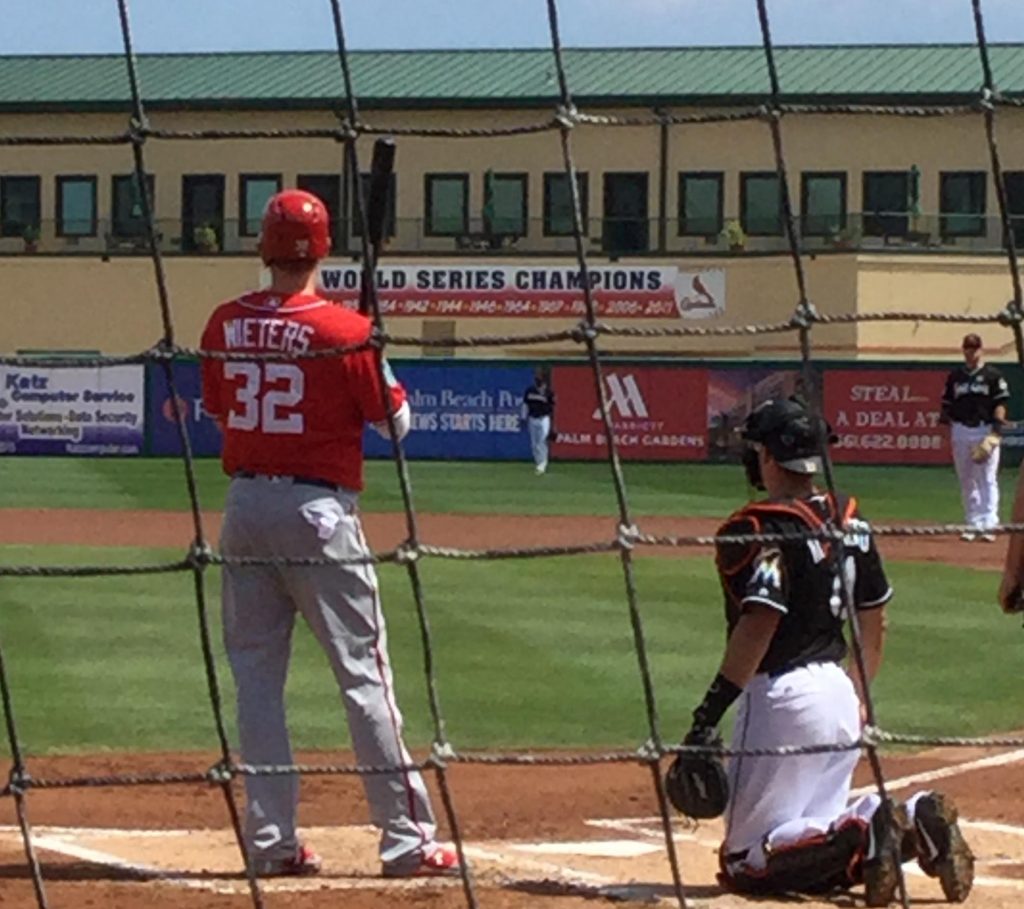 Photo by SoMDNatsFan for TalkNats

Even before the season ended and looking back at the 2017 trade deadline, we were hopeful the Nationals would upgrade at catcher. It never happened. The catcher position became costly in the post-season with both the starter and the back-up. The Nationals were the worst rated catching tandem in the Majors in 2017 ranking an awful -1.1 WAR. Today, the Nationals are set to enter the 2018 season with Matt Wieters and Pedro Severino as their catchers after Jose Lobaton departed via free agency.

“… until we address the one situation that was nearly-universally-agreed to be the Nats’ most important off-season area for improvement, I’m not ready to start the season. Standing pat at C [catcher] is an option if you aren’t really going for it. Only if.…” — UnifyBaseball http://disq.us/p/1pdyomr

We wrote as the off-season started that a catching upgrade was prudent, and we still believe that. Mike Rizzo is the boss here, and he could have a differing opinion on the catching position.

Consider some factors Rizzo has to traverse. Matt Wieters is represented by the Boras Corporation who also are the agents for 60% of the Nationals starting pitchers, and 67% of the starting outfielders (100% if Brian Goodwin plays in place of Adam Eaton), and 25% of the infield. You will never hear a Nats player bad-mouth Wieters, and in fact you will hear many of the starting pitchers compliment Wieters. There could be political fall-out if Wieters was pushed to the back-up role. Trading Wieters just seems remote with his $10.5 million salary. Also consider that Wieters was not able to prepare last off-season like he normally would because he had an injured arm. Wieters is projected by FanGraphs to bounceback this season to a +1.4 WAR from the -0.2 he finished at last year.

Four names have been prominently linked to the Nationals for catching upgrades: J.T. Realmuto and Wilson Ramos via trades and Alex Avila and Jonathan Lucroy via free agent signings. Of those four names, Avila worked as a back-up catcher with the Cubs and the other three catchers were starters. Rizzo could also get a free agent to stash in the Minors like Ryan Hanigan, Geovany Soto or Miguel Montero, and there are a few others who might only be able to find a Minors deal. Wieters is only under team control for the 2018 season as he will head to free agency afterwards. While more complicated, we have mentioned trade partners with the Indians or Cardinals for one of their top prospect catchers like Francisco Mejia or Carson Kelly.

Yes, there are many reasons to believe Matt Wieters will have a sizable improvement this season. He has been working out all off-season on a normal schedule and has trimmed off some body fat.

When Wieters was unsigned last year at this time, Scott Boras acknowledged that Wieters suffered an injury in November of 2016 that required stitches for a laceration on his left forearm from a broken glass jug that fell on his arm.

“There’s not anything wrong with Matt Wieters,” Boras said in early February 2017.

To start the season, Boras could have been correct as Wieters had a great April for the Nationals with the bat, but it was evident he was struggling on defense as he got to know his pitchers and they got to know him. The offensive success of April quickly turned to failure as Wieters bat went into a summer hibernation, and he batted below Mendoza in the second half and slashed a horrific .196/.279/.292/.571.

“I feel good,” Matt Wieters said in December. “I do feel like cleaning up the diet a little bit has made me feel a lot better. I don’t know about [feeling] 10 years [younger], but I do feel a little younger.”

Wieters will play closer to his rookie weight of 225 pounds this season and hopes to be more nimble on defense. The Nationals also don’t want him playing as much as last year as they believe that will help his overall productivity.

“We have talked a lot about [Matt Wieters] being a little older maybe getting some more days off just to keep him healthy throughout the whole year,” Dave Martinez said.

Wieters has his own thoughts on playing less as he prepares this off-season to play in 130 games.

“At the same time, whatever is going to be best for the team and best for how I’m feeling,” Wieters said regarding reducing his workload. “I’m excited because I do feel like … with [Severino] back there, we have the ability to, if I need a day off, I can get it. We’ll see what that plan is like moving forward. My goal now is to come in as good of shape as I can and catch 130 [games] if I need to.”

Wieters is saying all the right things going forward but never seemed to address what went wrong last year. As Wieters is just one part of the equation, the other part is who will be the back-up catcher, and Mike Rizzo has made it clear that Wieters’ back-up will be Pedro Severino. Of course that is the current plan, and pitchers and catcher report in exactly 4 weeks to The Ballpark of the Palm Beaches.

Severino barely got a sniff of the Majors last year and was not impressive. In a larger sample size, he regressed in Triple-A Syracuse and dropped in his prospect ranking out of the Top-10. Severino slashed .242/.291/.332/.623 in Triple-A in his age 24-season.

Mike Rizzo perhaps summed up everything on Matt Wieters in this interview:

“Wieters is a guy that had a down offensive year last year for us. But he’s got a track record. He caught 120 or so games for us last year. We would like to curtail that. We’d like to whittle that down and make him more comfortable in that 90+ range, and I think he’ll be much more effective, specifically at the end of the season, but it’s a problem because our pitchers want to throw to him — And they like to throw to him. He’s an unbelievable preparation guy. The pitchers trust him, they want him out there, and he got ground down a little bit.”

“He had a very, very limited Spring Training last season, because, first of all, we signed him really late into Spring Training, and with that forearm injury he didn’t have a lot of time to prepare. I expect him to be… he’s a proud guy. He’s going to be much more physically ready for Spring Training.”

The Nationals need a bounceback from both catchers. That is a tall task — it is possible.

This entry was posted in Analysis, Wieters. Bookmark the permalink.
← Previous Article | Next Article →