As the rumor mill churns, #Nats firmly tied to Realmuto/Yelich 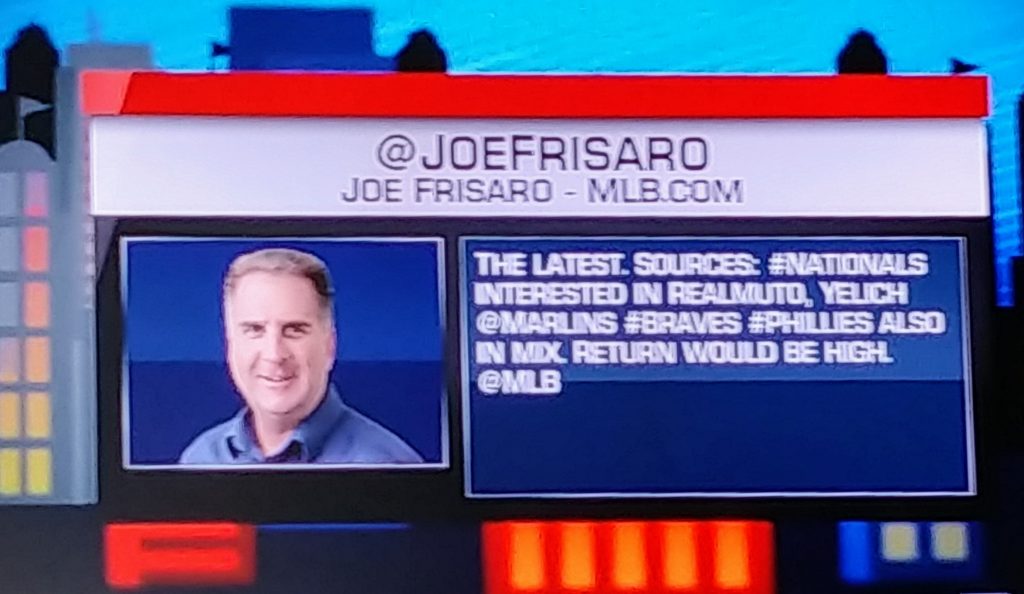 Mentioned #Nationals’ interest in #Marlins’ Realmuto in my latest notes column: https://t.co/XJ2mSqxD8G Team definitely wants to upgrade its catching, but does not want to part with Robles or Soto, sources say. Avila still possible as free agent.

“According to multiple sources, the Nationals are interested in J.T. Realmuto and Yelich, either individually or perhaps together in what would be a mega package,” Joe Frisaro wrote for MLB.com.

While any deal could be a long-shot, the Nationals have the prospects and players on the their roster to make this a reality.  While the Braves and Phillies have prospects to trade, neither team is ready to compete this year and J.T. Realmuto only has 3 years of team control remaining while Yelich is team controlled for 5 more years and makes more sense for those teams.

As we wrote over the weekend, J.T. Realmuto would be a perfect fit for the Nationals given the need for a #1 catcher. A move for Yelich is a little more curious given the Nationals control the outfield trio of Adam Eaton, Michael Taylor and Victor Robles for at least 3 more seasons and also a guy named Bryce Harper for at least the 2018 season.

Given that the Nationals are stacked in the outfield this year, would Yelich be a wise move now? It’s not an easy answer because the Nationals outfield is stacked for 2018. That question looks to the future and 5 years of control for Yelich.  It would appear that any acquisition of Yelich would make Michael Taylor expendable for 2018. But you also have to look at who the Nationals would trade for Yelich to know what the 2019 outfield would look like with Yelich and without possibly Michael Taylor and Bryce Harper.

The bigger question would be who the Nationals would have to trade from their pool of prospects. After the Adam Eaton trade in the last off-season, the Nationals took a big hit in their farm system.

Give up the farm, the pitcher spot might make three outs in an inning.

“…but this is an absurd lineup to attempt…

My real question comes from what does the 2019 roster and line-up look like with a possible departure of Bryce Harper, Matt Adams, Matt Wieters and Daniel Murphy?

It would make more sense for the Nationals to only pursue J.T. Realmuto while helping the Marlins raise the price on a separate deal for Yelich on the open market although you can see in that 2019 lineup projection how formidable that group could be.