A woman swinging the SSK lumber for the fences and catching what they throw her way!

Baseball, like all of the 4 major sports, is dominated by men — from the players on the field to the coaches in the dugout and the lifers in the front office. There are also all of those independent companies that provide the players with their equipment from batting gloves to cleats to gloves and bats, and those companies have been a good ole boys club until recently when Nell Kucich of SSK Baseball USA broke some of those boundaries. A fashion model a few years back, she traded in the glitz and glamour of designers, photo-shoots, and New York Fashion Week for the grit of the baseball diamond and the grind of traveling to clubhouses all over the map from the obscure Minor League parks like AT&T Field in Chattanooga to Major League stadiums like AT&T Park in San Francisco. 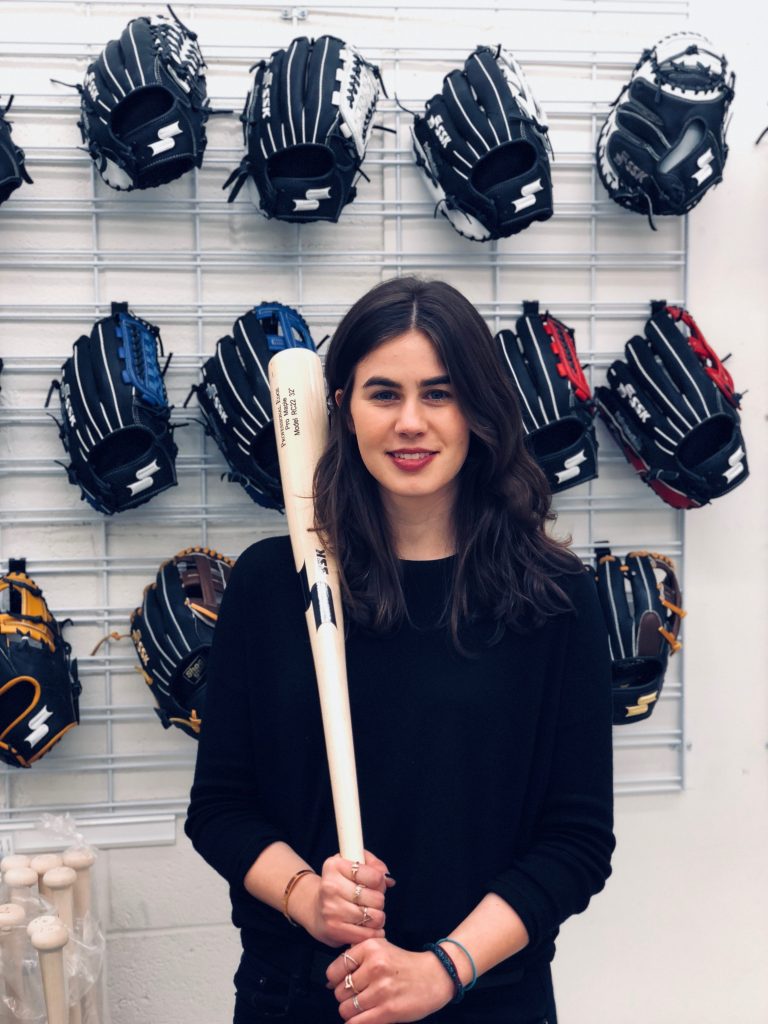 SSK Baseball USA is the US branch of a Japanese company that has existed since 1946 and has been the staple of fungo bats for decades in the United States.

“They’ve existed in Japan for quite some time, and were in the [United] States in the 80’s, but fizzled out,” Nell told me. “Two, two and a half years ago, my family, who has always loved baseball, met someone from SSK and brought it back to the States.”

SSK boasts a healthy roster of players using their equipment, including 8-time All Star (and about a million other accolades) Robinson Cano of the Seattle Mariners, and 2016 NLCS MVP and World Series champion Javier Baez of the Chicago Cubs. They also work with numerous minor leaguers, including the Nationals’ Neftali Soto, who spent 2017 in Double-A Harrisburg and Triple-A Syracuse.

An athlete herself who played college tennis, Nell’s brothers were involved in baseball as they grew up, and Nell has always been into sports.

“I was involved in fashion, so this was a bit of a jump. I worked with a bunch of different companies from Bloomingdales to Michael Kors, and I was a model in New York City. It was really cool, but I was looking for something different. This came along, and things just fell into place.”

She currently oversees all marketing efforts for SSK, and she handles player relations. “We’re a smaller company, so you get your hands in everything.” As part of player relations, Nell works to cultivate relationships with agents, the clubbies and with the players themselves. I asked her if it has been difficult for her as a woman in this position.

“I was worried about going into a male-dominated world. Not that it’s a bad thing or a good thing, it’s just different. Where I came from with fashion, there were a lot of men, but it was a different kind of creative space. When I talk to agents for the first time or ones I have relationships with, they’re a little surprised when they hear my voice and then we’re talking sports and baseball.”

She told me that she has experienced several occasions where someone has misread her name in emails as “Neil,” so they have been extra surprised to end up on the phone with a woman.

“It’s a good change,” Nell said. “And I think people are a little more receptive to it.”

Despite being a woman in a man’s world, player relations has become Nell’s favorite part of the job.

“I’m really liking the player relations side of things. In the beginning, I was most nervous about that, because it was unfamiliar territory, and it was male dominated. But I’ve really been enjoying working with the agents, and then through that working with the players. You meet a lot of people, and you get to travel. At first, it wasn’t my favorite, but it’s really become that.”

Even though she’s not in the creativity-driven fashion world anymore, Nell gets to flex her creative muscles as she works with players to develop products and campaigns around them.

“It’s been really exciting. Once you have the players, you can create a whole marketing campaign around them.”

Nell has had to approach her work a little differently as a woman compared to how a man would execute the same job functions. Understanding that she has to connect with players on a level different from knowing what they need based on personal experience has had a learning curve like any new job.

“You’d think some players wouldn’t want to talk to a girl because you weren’t on the field and don’t know what they’re going through. It was a little of a learning experience, but they’ve been accepting. I know a lot about the sport and our product line, but I had to learn about the needs of the players. I’m open to learning about the experiences about what the players go through and understanding where they’re coming from and what their needs are. [She does feel that women] have to prove a little more, so you have to be confident and direct. Having a little different personality [from men] has been helpful.”

Nell is killing it as a female executive in the male dominated sports world. She has worked to gain an understanding of the unique experiences players have, as well as learn what their needs are for training and for the equipment they use on the field that help them be the fantastic athletes we get to watch for 162+ games every season.

She hasn’t experienced much push-back, and feels her different voice has been helpful. Keep rocking it, girl, because as Queen Beyoncé says – who runs the world? Girls. — And for any players reading this, look for Nell in your clubhouse in Spring Training.