Updated: The Dusty Baker era is officially over 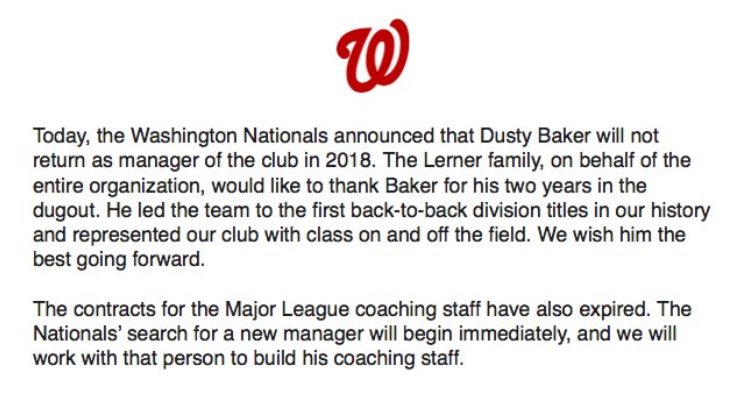 The popular vote on the MLBTR poll seemed to be slightly in favor of Baker staying. The only vote that mattered was that of Mike Rizzo and the Nationals ownership.

Grant Paulsen on 106.7 radio just said that he heard from his source that Dusty Baker was going to be back, and Mike Rizzo wanted Dusty Baker back.

The #Nats announce they won't be bringing back Dusty Baker, against GM Mike Rizzo's wishes. Unbelievable

Mike Rizzo said the decision to end the employment of Dusty Baker was a group decision which seems to say Bob Nightengale’s tweet was not accurate. Who knows who or what is accurate anymore.

Many thought they read some tea leaves after game 5 when Bryce Harper was asked about Dusty Baker’s future and his answer was not supportive of Baker like Harper once was for Williams. Who knows and not worth reading into although that didn’t stop members of the media trying to connect the dots.

“That decision is made from up top,” Bryce Harper said after the Nationals were eliminated from the NLDS. “I don’t want to comment on that, really.”

There was certainly some issues between the Lerner’s and Baker when he took his future plans to the Washington Post to plead his case for a mid-season extension of his contract. Some said it was a done deal. The Nationals failure in the NLDS once again seemed to be the straw that broke the camel’s back.

“I mentioned it to one of the primary people [in Nationals management]. And I mentioned it to [General Manager Mike Rizzo] one time,” Dusty Baker said in early June 2017 regarding his desire for a contract extension. “That’s enough. They know.”

The Nationals will begin another manager’s search for their 7th full-time manager after they have parted ways with the previous 6 managers: Frank Robinson, Manny Acta, Jim Riggleman, Davey Johnson, Matt Williams and Dusty Baker.

“Winning [regular season games] and winning the division was not enough,” Mike Rizzo said in a media conference call this afternoon. “I made the decision last night and informed Dusty Baker this morning.”

“I’m surprised and disappointed,” Baker told USA TODAY Sports. “They told me they would get back to me and I told them I was leaving town yesterday and they waited 10 days to tell me.”

The math doesn’t add up Dusty. You were knocked out of the playoffs after midnight on Thursday October 12th as the game didn’t end until October 13th. It is exactly a week and everyone needed a clearer head to decide on your future. The initial response after the NLDS loss wouldn’t have been the best time to make a decision.

“I really thought this was my best year,” Dusty Baker continued to USA TODAY Sports. “We won at least 95 games each year and won the division back to back years but they said they wanted to go a different direction. It’s hard to understand.”

Jayson Werth: “Dusty is one of the best men I have had a chance to work with in baseball.”

“First of all, I’d like to say it was one of the most difficult decisions the ownership group and myself have had to make since we’ve been here with Washington,” Nationals general manager Mike Rizzo said. “Dusty has been a great representative of the Washington Nationals for his tenure here, a class man, a Hall of Fame-type of manager. I think the one thing that happened from the regular season to the post-season was that we’ve come such a long way with the Nationals organization. In 2009, we were hoping to improve our record from 2008. In 2012, we were hoping to make the playoffs. Now our expectations have grown to the fact that winning a lot of regular season games and winning divisions are not enough. Our goal is to win a world championship. And to that end, we made the decision late last night and alerted Dusty this morning.”

Rizzo spoke on the conference call while not taking questions.

“After Game 5, we assessed where we’re at and where we’re going with our organization,” Rizzo continued. “We thought after Game 5 that this was the right decision to make.”

Jon Heyman and others reported that a Dusty Baker contract extension was almost certainly going to happen. Maybe dynamics changed as local D.C. reporter Thom Loverro said  “…suspect that Team Boras was not happy with Dusty Baker” in response to the handling of Boras clients and the media debacle with Stephen Strasburg prior to game #4 of the NLDS.

Rizzo also made it clear that money was not a factor since that happens to be the ongoing narrative.

“This was a pure baseball decision,” Mike Rizzo continued. “Our goal is win a world championship. And to that end, we’re going to create a manager search. But this had absolutely nothing to do with negotiations, dollars. It was not a negotiation with Dusty. I talked to Dusty this morning and told him of our decision, and he took the news with his usual class and dignity and professionalism. We hung up the phone with a good taste in both of our mouths.”

Rizzo made it clear that this was a group decision to dispel any rumors that it was a Lerner decision only.

“This decision was obtained like every important, major decision we make here,” Rizzo said. “It’s a total group decision with a consensus at the end of it, and this was no different.”