A Bloop and a Blast; The Miracle in the Mums; Nats change October 7th history! 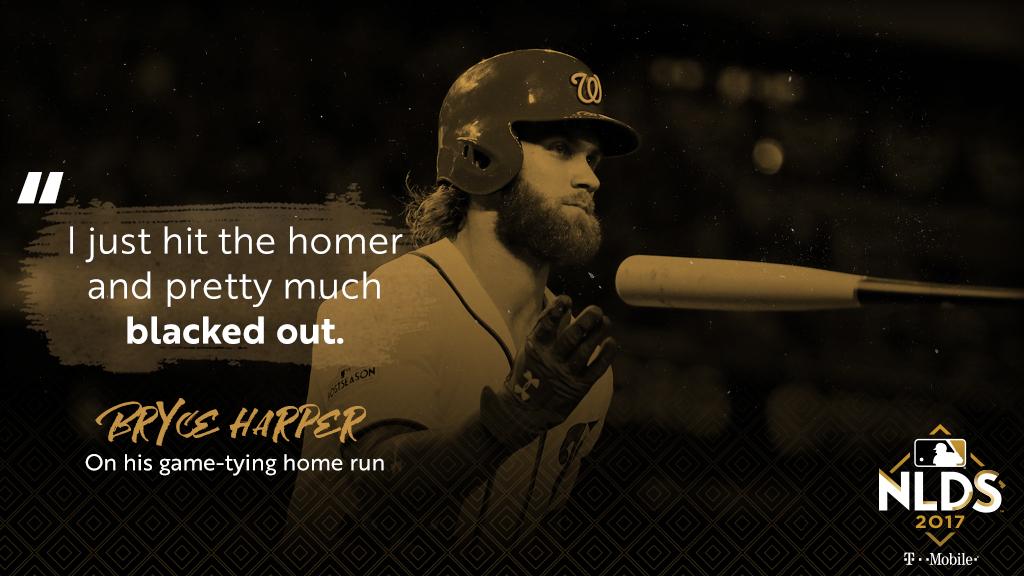 It was a case of deja vu with an appropriate ending this time. We have been here before on October 7th behind in an NLDS with Bryce Harper at the plate able to tie a game with a home run and hang a blown save on a reliever. Three years ago, Harper hit the game tying bomb against Hunter Strickland and the San Francisco Giants to tie that game — but his teammates could not add-on like Ryan Zimmerman did on this October 7th putting the exclamation point on the evening and while Harper’s 421 foot blast hung the blown save on Carl Edwards — Zim assured he would take the loss also.

On this October 7th, it started with Adam Lind — a first-timer in post-season play. With Harper in-the-hole representing the tying run if Lind could get on-base by any means — then Harper could work his magic. The blonde-headed Lind obliged and stroked a single down the 3rd base line to create the “bloop & a blast” scenario. We haven’t seen a pinch-hit that led to a game-winning inning since October 7th of 2012 when Tyler Moore‘s 2 RBI pinch-hit single won the game for the Nats and hung a blown save on Marc Rzepczynski.

On this October 7th, Anthony Rendon batted after Bryce Harper and worked a walk on Edwards prompting a pitching change. Left-handed Mike Montgomery faced Daniel Murphy who hit a single putting two on-base with one out and Ryan Zimmerman coming to bat. Any hit by Zimmerman almost certainly puts the Nats ahead with Rendon on second base, and a doubleplay would kill the inning. Montgomery threw Zimmerman a high change-up that Zimmerman could drive in the air and he got the baseball high enough in the air and allowed mother nature’s wind-current to do the rest. The Cubs leftfielder, Ben Zobrist, camped under it in front of the green fence padding and the ball carried just enough to clear the padding and land in the newly planted and hearty mums for the Miracle in the Mums and the game-winning home run.  StatCast™ measured the home run at 368 feet which worked on this day. The ball carried out on a wing and prayer. 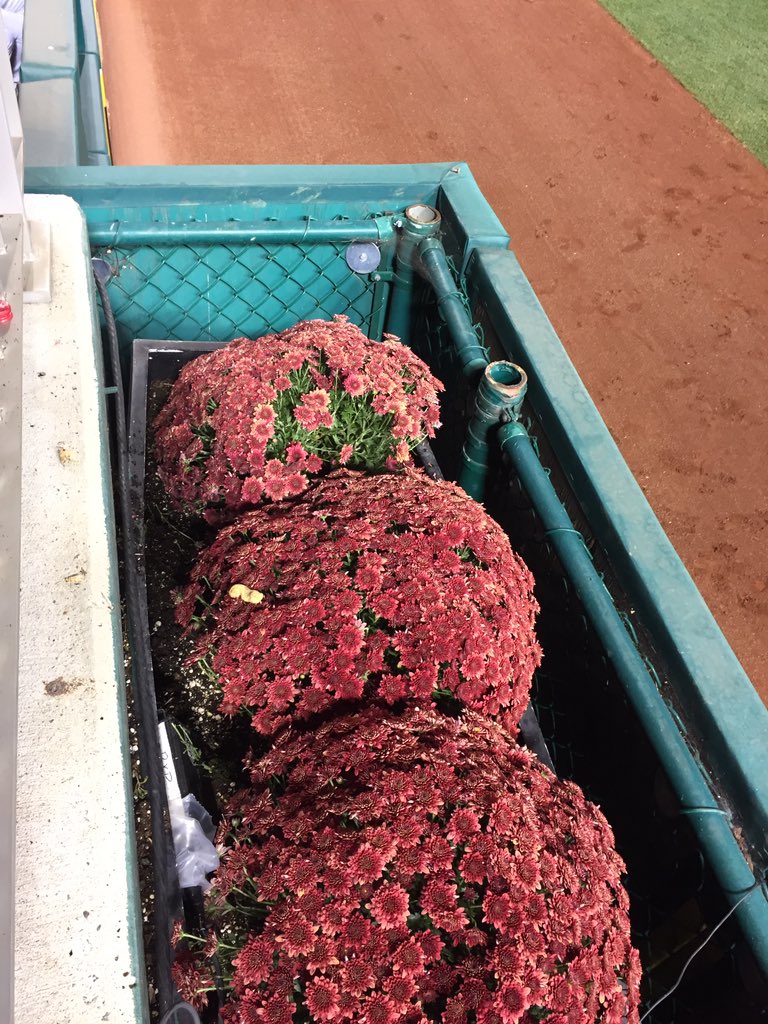 Photo by David Speroni for TalkNats of the mums. Speroni almost caught the HR ball

David Speroni was in the first row of Section 103 where that Zimmerman home run ball was headed. He was donning his “rally cap” and wishing that ball had enough as Speroni could feel that gust of wind in his face and he knew it would clear the wall.

“It buried in the mum,” Speroni said. “We go to about 5 [games] a year. Typically Section 100 red seats. I think we are good luck. We were there for Bryce’s walk-off versus the Phillies earlier in the year.”

On a game with no wind, who knows what happens. Speroni is correct about luck. There is certainly a luck factor and mums are special. Once there were begonias there and they were replaced by autumnal chrysanthemums. Mums as they are called have flowers that symbolize fidelity, optimism, joy and long life. Optimism and joy were immediately felt by the nearly 43,860 in attendance and many multiples more watching on TV and listening on the radio.

Harp swung hard with his Victus bat and after contact he flipped it high. In the past, Harper has etched Morior Invictus on his Victus bats which translates to “Death Before Defeat” and Ad Victoriam translates to “To Victory”, but this Victus bat was simply etched with Bryce Harper’s name on the barrel of his 34 inch BH137.1 model bat that Victus exclusively makes for Bryce with the V logo. 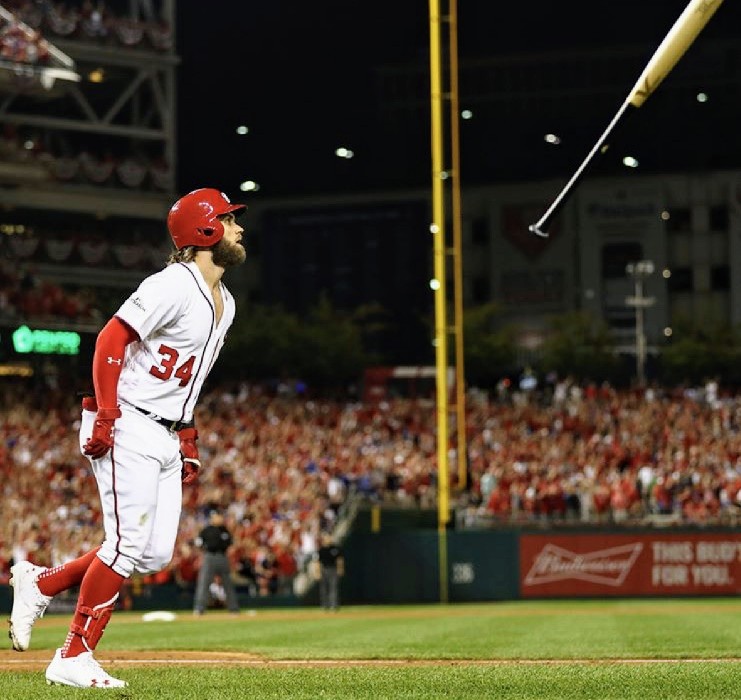 Harper put the first exclamation point on this game and Zimmerman put the final mark on the game.

“As an offense I’m just happy we scored some runs,” Ryan Zimmerman said. “I knew I hit it well. I hit it high. We will take it.”

Bryce Harper was asked after the game if he has the “clutch gene”. His answer while sitting at the postgame table next to Adam Lind and Ryan Zimmerman prompted this answer:

“Mr. Walk-off is sitting next to me.”

Mr. Walk-off indeed but Bam-Bam is darn good himself at finishing games and tying games especially in the post-season.

What is it with October 7th and Bryce Harper? When Ron and Sheri Harper the former junior-high sweethearts found out they were pregnant and expecting Bryce to be born in October of 1992 — October 7th must have been within the realm of possibilities for a date but of course Bryce was born 9 innings later on October 16th as the future prodigy.

If you’re into numerology, you know Bryce’s favorite number is 7 to go with his favorite player Mickey Mantle who wore jersey #7. On Bryce’s jersey number 34, he will tell you that he chose that number because the 3+4=7,  and by the way, the 421 foot that Bryce just hit has the individual numbers 4+2+1 and that adds up to 7.

The only future question is whether Bryce Harper will be playing meaningful baseball on his birthday and beyond and that answer comes from those mums with the optimism.