With the playoffs already underway, I’m pretty sure no one really wants to read a detailed account of the Nats’ last 18 games, all of which occurred after the NL East clinching victory in Game 143.  And I certainly don’t want to write said account.

But I do feel strangely obligated to complete the year with a quick update to the various stats and trends we’ve been following over course of the season. So here goes, and apologies in advance to anyone who finds this 18-gamer less compelling or entertaining than the previous eight.  That’s kind of the way this set was.

I’ve noted time after time in introducing the 18-gamers that a team averages just 10-8 in it’s nine 18 game sets will have 90 wins and be in the hunt for a playoff spot? Well, this year, Nats averaged 10.8 wins per set. That’s 97 wins, and an NL East title by 20 games over their closest competition, the Miami Marlins.

Here’s the batting recap for the set.

Of note, two likely, lefty Dodger starters in a possible  NLCS matchup had good games against us.  Then again, they didn’t face our full lineup.

Dusty essentially went to a six man rotation after the clinch, using the only six starters we saw after Fedde was shut down at the end of August. Here’s how they did. 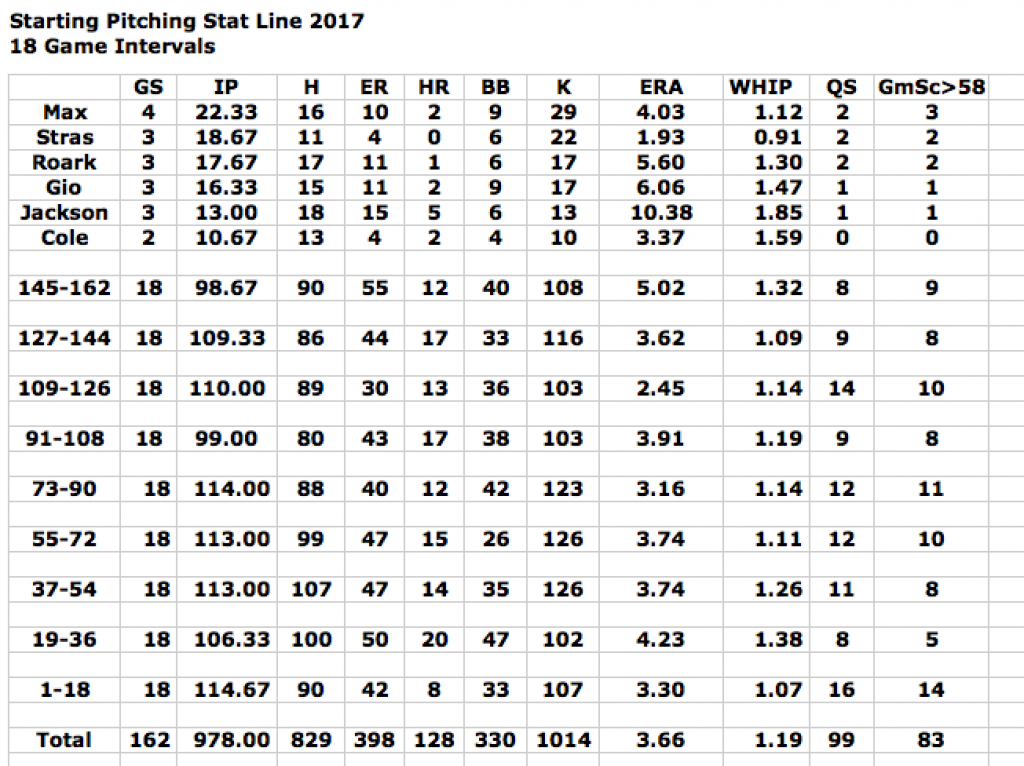 Stras was excellent, but as a group they had by far the worst ERA and WHIP over a set for the season.  Yet they still had 8 quality starts.  Indeed, let’s take a moment and appreciate that the Nats had 99 quality starts in 162 games, and over half of their starts had a Game Score of 59 or higher.  I have no idea how those numbers compare to other teams, but they seem pretty good to me.

Here’s the full pitching summary, for the record.

One regular feature of these recaps has been a look at the splits of our star hitters in the middle of the lineup, Bryce, Murph, and Zim. I started doing that after each of them had a phenomenal first 18 games, and it’s been a good way track their progress over the course of the season.

Bryce missed most of 18-game set 7, and all of the most recent set. Perhaps the biggest moment of the final 18 games was his return to the lineup.

Bryce didn’t do much offensively in the five starts and 20 PAs he had before the season ended. But just seeing him in the lineup and out in right field boosted the spirits of Natstown in a big way. Ending on a high note with two hits in the last game, Bryce’s final numbers are still mighty impressive.  An OPS of 1.008 says nothing but “superstar.”  We can only wonder what he might have done in the counting stats if it wasn’t raining on that fateful night of August 12.

Zim also ended on an upswing. He had some stretches this season where it looked like his comeback season was slipping way. But his final 18 games were better than any such stretch since May, allowing him to reach a career high 36 homers on the last weekend of the season with two bombs against the Pirates.

Zim’s 12th full season  in the game, at age 32, was not only an amazing comeback from his horrendous 2016, it was also arguably the best overall season of his career. He hit over .300 for the first time since his 58 AB September call-up in 2005.  He also had his highest slugging average ever, and his highest OBP since his great 2009 season, which was also the last time he was named to the All Star team before this year.  Here’s the final tally in 18 game splits.

Then there’s Murph. His few “down” sets have been much less down than Zim’s. The man is nothing if not consistent. Especially against his former team.

Overall, his set was outstanding. Check out the full picture.

Murph’s OPS was over .900 in all but one 18 game set this year, striking out only 77 times.  Just another amazing year for the best free agent signing the Nats have ever made.

And so we’re on to the playoffs. Boz says only one team has won the World Series with an 11-7 record in the playoffs. (Search for “11-7”).  So my dream of doing an 18-gamer to cover the whole postseason and the first World Series title for the Nats  is probably just that – a dream. But dreams are what October baseball is made of, and sometimes they come true.

This entry was posted in 18GameRecap. Bookmark the permalink.
← Previous Article | Next Article →