Does Victor Robles have a real shot at making the NLDS roster? 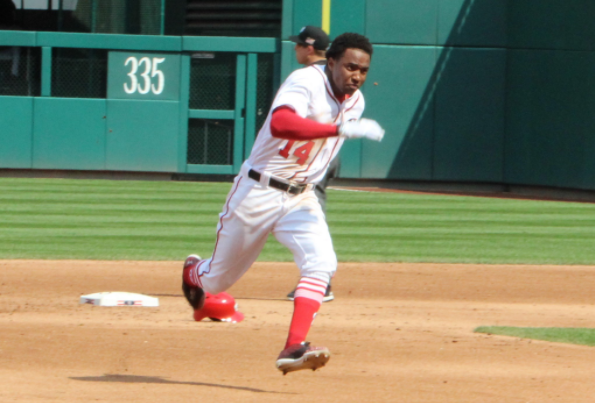 You can only carry 25 players on your post-season roster. That is a rule. No expanded rosters in the post-season like managers have now.  Last year in the NLDS, Dusty Baker went with an ill-advised 6 man bench and a 7 man bullpen, and we hope he does not do that again as the tried and true method is an 8 man bullpen and the normal 5 man bench.

Victor Robles was added to the Nats roster this month and made his debut as the youngest player in baseball at 20-years-111-days-old and he has started just 2 games in his Major League Baseball career, and the sample size gives you a glimpse. It reminds you of love at first sight and thinking that could be your future spouse, but like with top prospects, you must let it play out and get to know each other for a while as it’s easy to fall in love and most times it fizzles out over time. Now some would say we fell in love with Victor Robles years ago — yes, that is true. A baseball marriage is usually only 7 years unless you marry a Ryan Zimmerman. The divorces are usually painful. But some of the marriages are like a honeymoon most everyday.

JD comments: “I think the idea of putting Robles in the lineup for now and the playoffs is all of the sudden very enticing. I am not talking about a bench spot. I am talking every day lineup…I think VR is better than MAT now. He is better than Werth too but I don’t think they are benching Jayson in his last month here.”

There are those that think you go with potential even though Robles only has played all of 2 MLB games. We have seen the hit and speed tool, and any scout who has followed him knows he is a 4 1/2 tool player as the power tool is just a matter of time.

Let’s talk about speed and how speed has once again changed the game of baseball so much so that the Royals used that tool as a secret weapon in the 2014 and 2015 post-season. The Royals carried Jarrod Dyson mostly as a pinch-runner and defensive specialist as the last man on their bench as well as Mondesi. Speed kills as we like to say. Trea Turner is one of the fastest men in baseball. We usually judge baseball speed on the 2×90 foot race aka the 60 yard dash or the equivalent of running from home to 2nd base.

“I’m always thinking third base unless [the 3rd base] coach stops me,” Victor Robles said.

Trea ran a 6.3 in High School as we know from this interview with his High School coach Larry Greenstein.  6.2 is considered world class speed and a 6.3 is about the best you will find in baseball since these aren’t Olympic sprinters and Bullet Bob Hayes and Skeets Nehemiah don’t play baseball. That extra 10th of a second either way makes a difference. Most players are lucky if they are 6.5 to 6.7. The Perfect Game scouting now measures their players at showcase events and they recorded Carlos Williams at 6.18. Williams went undrafted this year out of University of Memphis because he couldn’t hit and you can’t steal first, but you might want an “80 tool” runner on your post-season bench because Victor Robles has 80 speed. His scouting report says 65-70 but sorry, that’s 80 speed which is the best of the best.

Here is what Victor Robles did on his triple on speed.  He ran last night the fastest recorded time ever for a Nats player on a triple eclipsing times from Trea Turner and Ben Revere.

Victor Robles clocked his RBI triple in just 11.12 seconds for the fastest home-to-3rd time of any @Nationals player in @statcast history. pic.twitter.com/keiu8sHTZd

What we need to see now is Victor Robles playing every game for the rest of the season in all three outfield spots because two games of sample size just is not enough to make sure he is ready for the bright lights of October. Robles already got the taste of an clinching celebration replete with alcoholic beverages sprays and technically he is not even of legal drinking age — but he is talented enough regardless of his age to help his team get to the next celebrations that are in front of this team.

“You’ve got to like what you see,” Nationals manager Dusty Baker said. “You can see why everyone wanted to trade for [Victor Robles] and you see why we didn’t want to give him up and include him in those trades. He can be an impact player.”