Tanner Roark has a new mix and look to his arsenal! 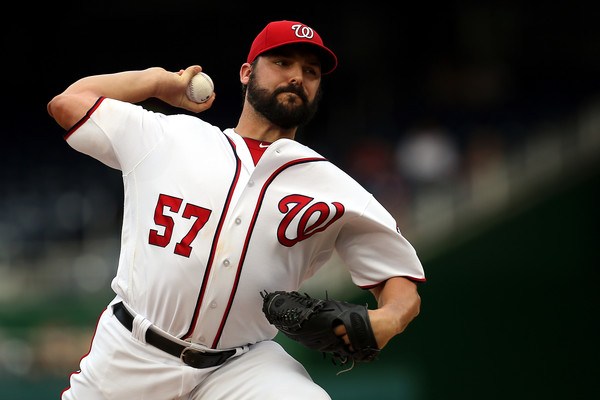 Tanner Roark was dominant last night and better than the 2-earned runs he was charged with due to a ball with an unlucky ricochet off of the outfield fence and a misplay on a flyball that should have been caught that turned into a triple. To put Roark’s outing in perspective, 11 outs were compiled by the strikeout and only 10 by the fielders behind him. The sinker pitch over the plate had become a BABIP nightmare for Roark where he was leaving those balls-in-play up to fate.

In Roark’s first start in 2017 he was fastball dominant with a steady diet of sliders, and last night Roark went with very few four-seam fastballs and went curveball crazy. Roark also modified his changeup slightly with much better results. The batters could not adjust to the curveball and Roark’s changeup which were as good as they have ever been. Before last night, Roark averaged about 2 curveballs per inning and last night he threw almost 4 curveballs per inning.

“It was something that started feeling good,” Tanner Roark said. “[The curveball] is probably my second best pitch, and it felt good today. You got to throw it and keep it down and not try to make it break. That’s how I’ve been feeling — with every pitch.” 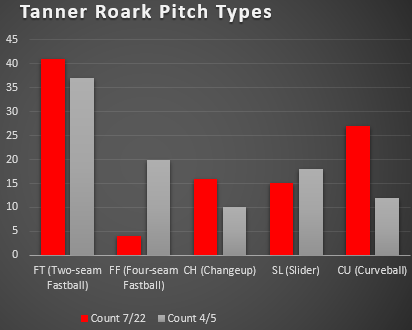 As batters tried to read the ball out of Roark’s hand, they didn’t know if they were getting the slider or the curveball at times. The “swing & miss” looked “Scherzer-like”as the batters had to sit back on the slower curve and made emergency hacks at the hard slider. The result was a season-high 11 strikeouts surpassing his previous high of 8 K’s. 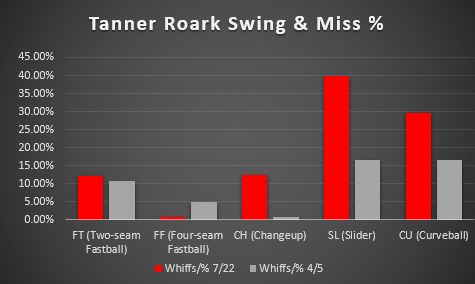 The next step for Roark is showing that he can do this again in his next start, and you build upon this start. This was a “Scherzer-esque” boxscore: 7.0 innings, 11 strikeouts, 1 walk, 2 ER.

“Confidence-wise — I feel through the roof,” Tanner Roark said. “If you go out there, have confidence in yourself and believe in yourself, [and if] stuff happens behind you, you can’t let that bother you or affect you. You just have to keep going and keep making your pitches.”

Tanner Roark has also been working on his breathing and turning off the hostile crowd noise that affected him in the World Baseball Classic earlier this year. Roark was not hearing it from the boisterous Diamondbacks crowd that was over 39,000 last night which clearly also had a large contingent of Nationals fans who you could hear when Bryce Harper smashed a long home run.

The one thing you probably also noticed was Roark didn’t challenge any of the Diamondbacks’ left-handed batters with his swingback two-seam fastball that he struggled lining up at the batter’s front hip. Instead Roark threw them away. Roark also only threw 2 sliders to the lefties and relied on his curveball to the lefties and his changeup to great results.

“If [Tanner] can’t start [the two-seamer] inside enough that it buckles the hitter it’s a very dangerous pitch,” former Nationals pitcher Mike O’Connor said. “It’s moving back over the plate.”

O’Connor now teaches aspiring pitchers in the Washington, D.C. area, and he knows the perils of trying to throw that two-seam swingback against a hitter on the other side of the plate. O’Connor who is a lefty would never try that against a righty because those pitches if not executed can go very wrong.

That’s exactly what was happening with Roark’s swingback two-seamer much of May and June. The lefties were feasting on his two-seamers during the month of June to a .388 average and they were also killing his changeup at a .421 batting average.

Roark has worked on a better changeup and staying off of the inside edge against lefties, and only one ball ended up on the inside 5 inches of the plate in the strike zone last night, and it resulted in a run. Just one pitch! The pinpoint Roark control has returned. Discretion was also part of this new Roark approach.

The adjustments in the pitch mix, locations, and how Roark and his catcher Matt Wieters went after the batters seemed well-thought through, and was a strategy they had been working with Washington Nationals pitching coach Mike Maddux. This new mix also seemed to be perfectly timed to this Business Insider article (http://www.businessinsider.com/yankees-pitching-strategy-fewer-fastballs-2017-7) that analyzes the Yankees new approach to pitching with less fastballs.

Roark looked strong and his velocity looked good and this all bodes well for Roark in the future.

This entry was posted in Awards, Roark. Bookmark the permalink.
← Previous Article | Next Article →