The third was the Nats record over the last 18 games. It was a see-saw set, lots of frustrations, and, despite a couple of three game winning streaks, fewer things to be excited about than in the three previous sets. We ended on a depressing note, losing the series against the Marlins, even though Max pitched a gem in the rubber game. A lot of fans are very uneasy. Whiplash hurts.

I certainly think it’s fair to say that this set contained some real cautionary notes, particularly on the pitching side of the ledger. Here’s the summary.

And take a look at the review of our starting pitching in this set – Tanner had a really rough set, but Gio was consistently very good. And Max was otherworldly. His average game score in his four starts was 79! That’s just ridiculous. Yet the Nats were only 2-2 in those four games, losing perhaps his best start of the season on Wednesday – 2 hits, no earned runs, 1 walk and 11 Ks over 8 innings, and a 2-1 loss. (For an explanation of what a Game Score is, click here.) 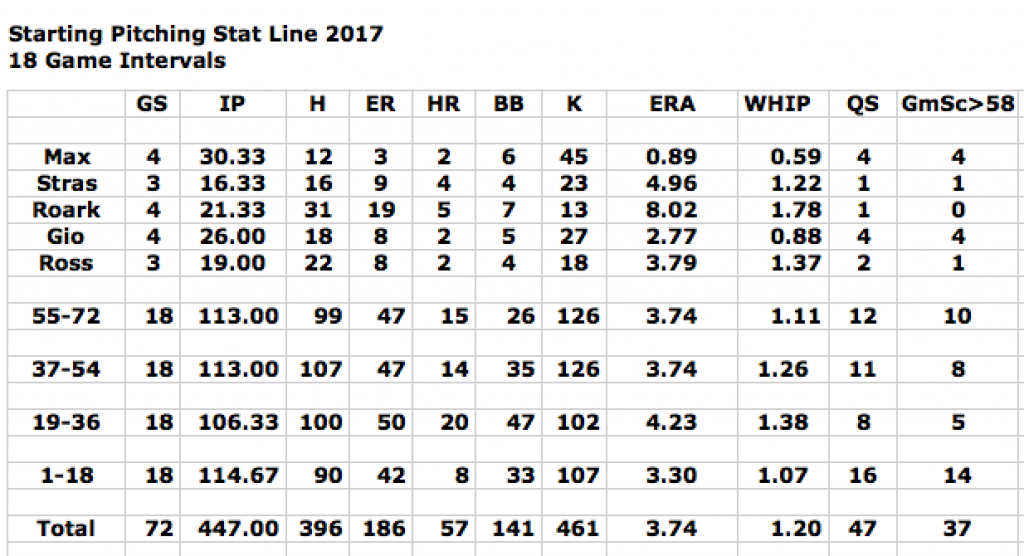 All in all, the starting pitching in this set was better than in the past two sets, thanks to Max and Gio. With 12 quality starts, the explanation for a mediocre 9-9 record lies elsewhere.  The bullpen was directly responsible for three losses in this set, and Dusty has as much as admitted that he leaves his starters in games longer than he would otherwise do because of lack of confidence in the pen.

Let’s take a look at the hitting. It was pretty streaky too. Here’s the summary:

The Nats scored seven or more runs in nine games, and lost two of them. That’s the bullpen’s fault. But they scored three runs or less in 8 games, and lost all but one of those. Feast or famine from the bats it seems. They ran into several good outings from opposing starters — McCarthy, Kershaw, Cashner, DeGrom, Straily, and that guy from Texas named Austin whose last name I can’t pronounce, spell, or remember. But they lost two games where they knocked out the opposing starter in under four innings.

On to the games.

The first game of the set was the rubber game of the three game series against the A’s, in the middle of the highly successful west coast swing. The game could be considered Exhibit A of the cautionary note that arose in these 18 games. The Nats put up a 5-spot in the 9th inning on home runs by MAT and Matt Wieters and a big two out, two run base hit by Murph to take an 11-4 lead going into the bottom of the ninth.

Koda Glover had obtained the last out in the 8th and Dusty left him to finish off the game after that 5 run inning. He promptly gave up four straight hits and a bases loaded walk before yielding to Shawn Kelley, who gave up a grand slam before finally closing out an 11-10 win. [I didn’t embed that video because it may not be suitable for small children. Click with caution.]

Kelley got a save for that effort. Would that be vulturing a save?

Next up were the Dodgers in LA, and the Nats took the first two games of the series behind a very good start from Gio and an excellent one from Max. In seven innings, Max struck out 14 and gave up just three hits and an unearned run in the Nats 2-1 victory. Check out this fun narration of Max’s tremendous performance.

The game also featured a classic first inning run for the Nats. The formula was:

After losing the third game of the series to Clayton Kershaw, the Nats came home from their 7-2 West Coast trip full of confidence. They took the first game of the homestand over the Orioles behind Joe Ross, with a little déjà vu all over again from Trea Turner. This time the formula was:

But after winning that makeup game against the O’s, the Nats were swept by a surprisingly tough AL opponent, the Texas Rangers. In the second game of the series, the undynamic duo of Koda Glover and Shawn Kelley once again were arsonists rather than firemen. Koda blew a 2-run lead in the 9th, allowing the Rangers to tie the game. Then Kelley, in his first appearance since his “save” in Oakland, gave up a three run bomb in the 11th to lose the game.   His ERA after that game stood at 7.47. Later in the set, after giving up yet another home run, he would join Koda on the DL.

Then the Braves came to town. Despite scoring 22 runs in three games, the Nats managed to win just one of them.  That one was Zim’s biggest night of the set, as he was able to feast on R.A. Dickey in a 10-5 win, and also tie Vlad for the franchise home run record.

Zim isn’t tearing the cover off the ball like he was in the first 36 games of the year, but he’s still arguably the most dangerous hitter on the team.  Until his OPS falls below 1.000, I’m going to keep calling him a strong contender for NL MVP.  Let’s see how this set stacks up against the previous three.

Even with a greatly reduced BABIP and only one walk, Zim had a decent 13 games in this set.  His Ks were down too.

The two losses to the Braves were demoralizing in different ways. One was a 13-2 blowout in the rubber game, with Trevor Gott giving up 5 runs in 1 2/3 innings and 52 pitches.   Hard to choose between that outing and Tanner’s 5 inning, 7 run, 9 hit start as the lowlight of that forgettable game.

But the first game of the series was the killer. The Nats scored nine runs in the first four innings, only to see the Braves chip away, one homer at a time. In all, they hit five taters, including the death blow – a 3 run pinch hit shot in the 9th by Tyler Flowers, making this guy seem like Carnac the Magnificent.

it's Markakis, Kemp and Adams up for the #Braves with only one run to give up … you can DO THIS, #Nats bullpen https://t.co/pX7dah4Sy3

Flowers’ homer came off of the until then solitary bright light in the bullpen this year, Matt Albers. Et tu Matt? The 11-10 loss might have been the most devastating of the season up to that point.

Nats fans were feeling pretty blue after that 1-5 homestand, and the team may have been as well.  So what’s the best medicine for that?  Why a trip to CITI Field of course!  Prior to arriving in Queens, the Nats were 42-14 in their last 56 away games against the Mets.  And they had Gio, Max, and Stras lined up to start.  Oh, and they had Daniel Murphy.

Murph, by the way, continued his amazing hitting in this set. In fact, he’s the one guy in our triumvirate of MVP caliber players who has not yet experienced a drop off from his great start. Check out the breakdown:

The man is simply a hitting machine.

The Nats took 3 of 4 in New York.  In the first game, a convincing 8-3 win behind Gio’s 7 inning, 2 run, 5 hit effort, Bryce got the party started with an absolute rocket. Thanks to Statcast we know it was his hardest hit ball of the season.

Bryce has not been quite as consistent as Murph over the course of the year.  But he also hasn’t regressed quickly and painfully the way he did after last season’s phenomenal April.

This set, in which he started all 18 games, was actually better than the last one.   He rediscovered the beauty of the base on balls, and getting on base more leads to scoring more.  Bryce is 4th in all of baseball (3rd in the NL) in runs scored. Since scoring runs is the goal of the game, I’m fine with him dominating in that category.  And with Zim and Murph behind him in the order, there’s no reason he shouldn’t.

Wieters, MAT, and TTB all homered the next night against the Mets, but the story again was Max, who continued his stellar work, twirling an 8 inning, 4 hit, 1 run, 10 K masterpiece for an easy win 7-2 win.

Then on Saturday, Stras took the mound in front of over 150 hearty Nats fans, many of whom journeyed from DC in a TalkNats sponsored trip.  A good time was had by all as Stras picked up his 8th win of the season, though he only lasted 5 1/3 innings.  Except for Joe Blanton, the bullpen performed admirably, with Enny Romero picking up the save after 1 2/3 innings of scoreless work.   I chose the following highlight, not just because there’s a quick crowd shot of a whole lot of red people, but because opportunities to feature the much maligned Jose Lobaton don’t come around that often.

After dropping the final game of the series to Jacob DeGrom’s 8-inning 3-hitter, the Nats headed to Miami.  They split the first two games, with yet another bullpen fail wasting a fine offensive performance, including yet another first inning HR by Bryce.  Enny Romero gave up the winning run on a walkoff hit, taking him down a peg after his good work in New York.

A blowout win the next night set the Nats up to win the series with Max taking the mound.  He held up his end of the bargain in spades, with a dominating performance and a near no-hitter. That game is still fresh in our minds, so there’s no reason to rehash it here.

But let’s just take a moment to appreciate what we’re watching here from Mr. Max Scherzer.  After 15 starts, he leads the NL in innings pitched, ERA, WHIP, Ks, Ks/9, and WAR.  He just completed his sixth straight game with 10 Ks or more. That puts him in rarefied air for sure: Nolan Ryan, Randy Johnson, Pedro Martinez, Chris Sale, and Clayton Kershaw are the only other pitchers to have done that.  Sale and Martinez hold the record with eight straight double digit strikeout games. Pedro has the single season record with 18. Max now has nine in his first 15 starts.

Based on all of this, it’s hard to argue with Brian Kenny.

ICYMI:
Why Max Scherzer may be the new #1 pitcher in the game: #DiggingIntoTheData pic.twitter.com/q2IZQ3qBgx

Can he keep it up? The Nats better hope so, at least until the bullpen turns things around or has a makeover.