You will recall that in the second 18-game set this season the Nats managed a 10-8 record despite some pitching woes, because their hitters continued to be on fire. The third set of 18 was a bit of a different story. The hitting was still formidable, but nothing like the first two sets. Have a look.

The story of this 11-7 set, which put the Nats 14 games over .500 with a 10 game lead over the Braves with a third of the season under their belts, was not the hitting or the overall pitching. It was a tale of the two aces shown at the top of this post – Max Scherzer and Stephen Strasburg. The Nats won 7 of the 8 games those two started, and just 4 of the 10 started by four other pitchers. Here’s the pitching summary for the set:

Eleven quality starts, seven of them from Max (3) and Stras (4), and 8 games with a Game Score of 59 or better, two from Max and three from Stras. (For an explanation of what a Game Score is, click here.)

Those numbers don’t match what the rotation did in the first 18 games when there were 16 quality starts and 14 games with a Game Score of 59 or more.  Then, the whole rotation was clicking.  Here’s a table summarizing the work of our starters in this set. It shows the dominance of our two aces, and the just so-so performance of everyone else.

Max led the way in Game 1 of this set with one of the most extraordinary, and gutsy, performances ever seen at Nats Park. Those in attendance or watching on TV saw this:

Max Scherzer, Warrior Mentality. [After taking a shot off his knee, staying in the game/sprinting to back up 3b on the next ball in play). pic.twitter.com/ylEaZN7Meh

And then they saw this in the very next inning: 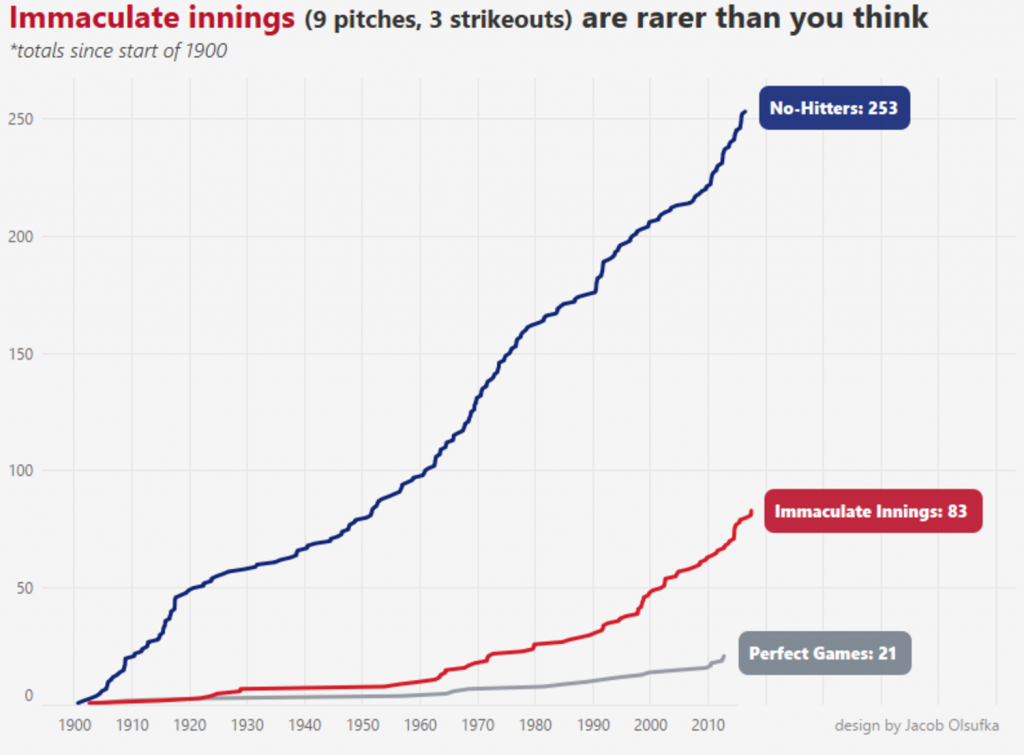 By the way, if it weren’t for the elbow of Jose Tabata, Max would have become the 6th pitcher in baseball history to have thrown an immaculate inning and a perfect game – the others are Sandy Koufax, Jim Bunning, David Cone, Randy Johnson, and King Felix Hernandez. Something tells me he still might join that group.  All he needs is a perfecto.

After that excitement, the Nats headed off on a road trip to Pittsburgh and Atlanta. After winning the first game behind Stras at PNC Park, they dropped four straight, including Max’s second, and worst, start of this set. But they got back on track behind Stras, in the game where he made 125 pitches and had to be bailed out by Koda Glover after giving up two runs in the 8th.  Still, he had a season high 11 Ks, and the outing was surely a sign of what was soon to come.

And the Braves were impressed.

Coming back home, the Nats took a series against the Seattle Mariners, visiting DC for the first time since 2011.  They won the first two games in an equally miraculous 2 hours and 28 minutes each, behind very fine outings by Joe Ross and Tanner Roark. Each game also featured home runs by Anthony Rendon.  He gave typically in depth and insightful comments after his multi-homer game.

Anthony Rendon is quietly becoming as big a threat as the more famous guys that normally hit ahead of him in the lineup.  Take a look at what he did in these 18 games.

His 1.135 OPS was better than Bryce Harper‘s, Ryan Zimmerman‘s, or Daniel Murphy‘s in this 18 game set.  The only one close was Murph, who kept up his steady swinging, and, remarkably, had an even higher OPS in this set than in the previous two.

Unfortunately, Zim couldn’t quite keep up his torrid pace of the first 36 games, during which he won both NL Player of the Week and NL Player of the Month in April.  Still, he is by no means cratering.  His first third of this season has been outstanding.

So after the Mariners departed, probably not to be seen around these parts until 2023, the Padres had the misfortune to come to town right when our two aces’ turns to pitch arose.  And Chris Speier, filling in for Dusty for the weekend series, could just sit back and watch.  First up was Max, and he dispatched them in 2 hours and 25 minutes, going 8 2/3 innings and striking out 13.  TTO lead the game off with a home run, and Bryce and MAT also went yard as Max cruised to a win.

The next night, it was Stras’s turn, and he turned in his best outing of the season, striking out 15 batters in 7 innings.  Albers and Koda completed a 3-0 shutout of the lowly Pads.  Stras even scored one of the runs with a nifty slide.

After taking series from two visitors from out west, the Nats headed in that direction to meet up with Dusty and take on the Giants, A’s and Dodgers. Unlike the poor Padres, the Giants and A’s only had to face one of our aces. Max finally got his complete game against the Giants, a 100 pitch, 5 hit, no walks, 11 strikeout gem.

And Stras benefited from a power explosion in the late innings, turning in a fine 2 run, 4 hit, 7 K performance over 7 innings against the A’s.  The Nats took both series and by the end of the 18 game set had assured themselves of a winning road trip, regardless of how they do against the Dodgers.

The biggest news of the road trip, of course, was the melee in AT&T Park on Memorial Day, touched off by Hunter Strickland throwing at Bryce Harper in retribution for Bryce’s hitting two colossal home runs off him in the 2014 NLDS.  I doubt anyone here will be disappointed that I’m not going to embed a video of the incident. If you haven’t seen it by now at least a dozen times, you clearly don’t want to see it, or you’ve been living under a rock.  Or maybe both.

I will however share this, which seems like poetic justice for the mediocre reliever who will forever be known for nursing a ridiculous grudge for nearly three years, despite, in Bryce’s immortal words, “wearing that ring home every single night.”

When Phillies fans make fun of you by yelling the name of a hated player from another team at you, you may have hit rock bottom.

The fact that Bryce’s biggest highlight of the set was a punch he landed is unfortunate.  He’s been slumping and suspended so his numbers this time around were not very good.

One thing to note is that he didn’t walk nearly as much in these last 18 games.  And his BABIP was way down, along with his run scoring.  With Zim, Murph, and Rendon behind him, he can afford to be picky at the plate. In the next 18, we’ll hope he gets his stroke back an starts helping out our two aces, and the rest of the rotation.  Until he does, Max and Stras will have to keep leading the way.