Overall, the bullpen is broke and it needs to be fixed, but what is wrong with Shawn Kelley?

Part of the of $5.5 million question goes beyond the totality of the bullpen, and we wonder what is wrong with Shawn Kelley? All the warning signs were there yesterday as soon as he took the mound. Velo was down over 1 mph and the vertical movement was straight for that four-seam fastball by Kelley that Altherr crushed for a lead-off home run in the 9th inning yesterday. On Saturday, Kelley pitched his first game since returning from the disabled list which was 13 days since he last pitched. 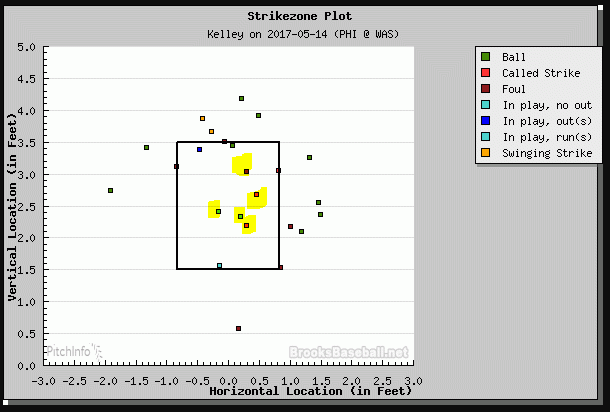 This chart shows how Kelley is not getting the desired swing and miss with his slider consistently and in 5 games he got no swing and miss on the slider. 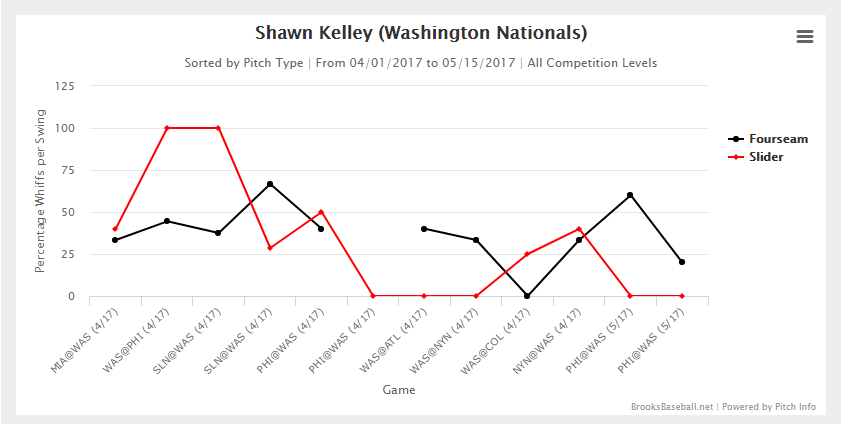 On top of that you can see the yearly chart for Shawn Kelley as he progressed to being one of the best set-up men in baseball. That HR/9 at 4.8 is a disaster. For every 9 innings pitched he is giving up just under 5 home runs. While his K/9 is still strong, he is walking as many batters as he is giving up home runs.

From Tom Boswell: The Nats have a bullpen that will improve and may even be good for weeks at a time this summer. But they do not have a World Series bullpen. They have an assortment of relievers who, in some combination, can handle the sixth, seventh and eighth innings. But if you hand any or all of them the ninth in October, they will revert to this spring’s disaster and destroy the season. The Nats need to face it and fix it.

It’s not primarily the fault of Kelley, Glover or Blake Treinen, who got a battlefield demotion from the closer role in April. They’re attempting to work beyond their résumé or pay grade. They’re fine in proper roles. Someday Glover may be a closer. But right now, none are up to the most important job, not for the rest of this season. In the absence of that psychological ballast, the Nats’ bullpen takes on water and, seven times in less than six weeks, has sunk the blown-save ship.

My point for a while has been using that Baker needs to do a better job of using the relievers in their proper roles while also using them in their best situations to succeed. Pitching Kelley one appearance after he returned from the disabled list while he threw 25 pitches and then allowing him to throw away the game and expend 24 more pitches to lose the game was not the best use of the resources on a day where Jacob Turner and Matt Grace were both available in a bullpen that totaled 9 relievers on Sunday. We are not suggesting that Grace should have pitched in the first game of the doubleheader yesterday but there were many other options.

From Dave Cameron at FanGraphs: So far, it hasn’t gone well, with Shawn Kelley blowing another ninth inning lead yesterday, the third time this year the Nationals have lost a game they led headed into the ninth inning. Kelley’s blown save included his sixth home run allowed this year, a staggering total for a guy who has thrown just 11 1/3 innings so far in 2017. Blake Treinen and Koda Glover haven’t been much better, with Treinen walking too many guys and Glover striking out too few, so while the Nationals maintain a comfortable 7 1/2 game lead in the NL East, it’s becoming more and more obvious that the team will be making a trade for another closer this summer.

The dumpster fire that is the rest of the NL East gives them time to be patient, to not have to panic into an early overpay for an inferior option, but it’s tough to look at this current group and think that the Nationals only need one more reliever to be set for October. In looking for bullpen upgrades, Mike Rizzo might want to start thinking about how to buy in bulk.

Dave Cameron made some similar points to what we have made recently. The Nationals are in first place and can be patient without wreaking of desperation. There will be options, but at what price?

Luxury items never come cheap, and when you need the Bentley Mulsanne you don’t buy the Chrysler 300. They both are cars and look the same from a distance, but they are completely different inside and in the mechanisms. A legit closer looks different from 60 feet 6 inches compared to the imposter over a larger sample size. Some could argue that they all begin on the assembly line looking similar and evolve into the luxury item.  The singer Drake called out the imposter in a song:

Mike Rizzo must get this team a Bentley because a fleet of Chryslers just won’t do.