Time for the Nats to win the MASN Cup

Five straight years, the Nats have lost the MASN Cup to the Orioles, going 7-17 over that time frame. The Nats have not won the Cup outright since all the way back in 2006. This has to end. In a 162-game regular season when even successful teams lose plenty of three game series along the way this is the only series that really matters. This is the series for office bragging rights. For sticking it to Angelos for keeping a team out of DC for so long and for my belief that his continued maneuvering has denied the Nationals their rightful broadcast fees. For proving that the Nats are really the top team in the area. 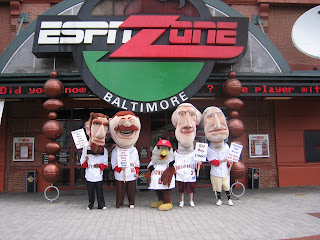 Taken from Nats320 (hope SBF doesn’t mind, if you do, will remove)

Many of us have been rooting against the Orioles for a lot longer than we’ve been rooting for the Nats. Growing up in DC in the 70s and 80s we had to convince our Dads to drive all the way to the far side of the slums of Baltimore to see our favorite teams, just to be treated as barely tolerated visitors. Many of us resorted to abstaining from attending MLB games altogether in our own personal boycotts to deny Angelos our ticket money while he did everything he could to block DC baseball.

What the Nats bats won’t do this week is show up with the best offense in baseball and slide into a collective slump in a hitters ballpark. What the Nats pitchers won’t do is have Gio revert to his 2016 form, or Max or Stras force the bullpen to pitch four plus innings to finish their games. What Baker won’t do is sit half his line-up like this is some early spring three hour bus ride game. Too many times in the past nine years the Os have shown up with a since of urgency while the Nats took the week off.

The Caps and Wizards are both playing critical playoff games this week, trying to get DC into the semi-finals for the first time since 1999. On Wednesday, the Caps should be playing game seven against their most hated rivals, the Wizards will be playing game five in a nasty feud of a series, meanwhile I’ll be at Nats Park watching the game that matters the most to me. I’ll be drinking $10.50 beers and cheering hard for the home team, the 21-10 record won’t mean a thing, all that matters will be finally bringing the MASN Cup back home.

(An announcement that the Nats won their appeal in the MASN case would be well timed this week.)

This entry was posted in MASN. Bookmark the permalink.
← Previous Article | Next Article →