Tanner Roark gets the historic start for Team USA in what he acknowledged is the biggest game of his career!

Sports allows do-overs of sorts, and Tanner Roark is getting a chance to redeem himself in the World Baseball Classic after his 1 ¹/3 inning setback against the Dominican Republic in Miami way back on March 11th in which he gave up 3 earned runs.

Roark was part of the DPP ( Designated Pitcher Pool) and was not supposed to be pitching with Team USA at this point in the tournament, but Chris Archer departed and told Jim Leyland that he was not returning which opened this chance at redemption for Roark. Whether Roark is getting this start by default or fate, he is relishing the opportunity in what he acknowledged is “the biggest game of his career”. 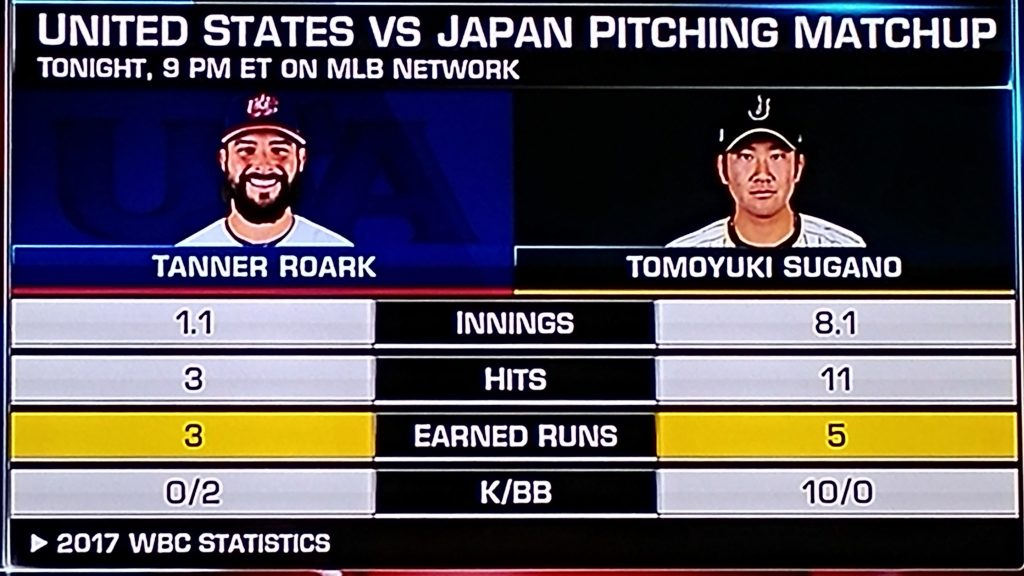 Roark will face Japan and their starting right-hander Tomoyuki Sugano in the semifinals at Dodger Stadium tonight in this single-elimination game with the loser-go home-format. The Americans are trying to reach the championship game for the first-time ever in the World Baseball Classic.

For Japan, Tomoyuji Sugano is the ace of the Yomiuri Giants and he has allowed five earned runs through 8 1/3 innings (5.40 ERA) in the tournament. He’s struck out 10 batters and has yet to issue a walk .

“It’s finally here,” Sugano said with his usual confidence. “Tomorrow, for sure we’ll win and advance to the final, that’s how I feel.”

Japan advanced to the semifinals by winning Pool E with a 3-0 record. USA finished second to Puerto Rico in Pool F with a 2-1 record.

“[Roark has] gotten the short end of the stick a little bit so far, to be honest with you, the way things worked out,” Team USA manager Jim Leyland said. “But he deserves this start. He’s been a trooper. He signed up for this event, and I’m pitching him. I feel very, very comfortable about it.”

The Japanese line-up is filled with mashers and Tsutsugoh and Nakata each have 3 home runs in the tournament. Japan’s top hitter is Sakamoto who has a .522 on-base-percentage. Tanner Roark will be facing an unfamiliar line-up but his strategy is simple.

“The key is to pitch to my strength, and that is throw strikes and get outs,” Tanner Roark said. “Just trying to stay mentally focused on the game.”

The Japanese squad is much different from the United States’ opponents in Rounds 1 and 2 that looked like All-Star teams of Major League players, but most of Japan’s roster comes from Nippon Professional Baseball and are virtually unknown to this Team USA roster because their only MLB player is Royals outfielder Norichika Aoki as Ichiro Suzuki and past stars like Hideki Matsui are not part of this team nor are Japanese star pitchers such as Yu Darvish, Hisashi Iwakuma, Masahiro Tanaka or Kenta Maeda.

Team USA has scouted Team Japan, and the winner moves on to the championship game tomorrow night at Dodger’s Stadium for a winner-take-all game against the undefeated Team Puerto Rico.

This entry was posted in Analysis, Roark. Bookmark the permalink.
← Previous Article | Next Article →