Scherzer throws his 3 finger fastballs to his battery mate Wieters 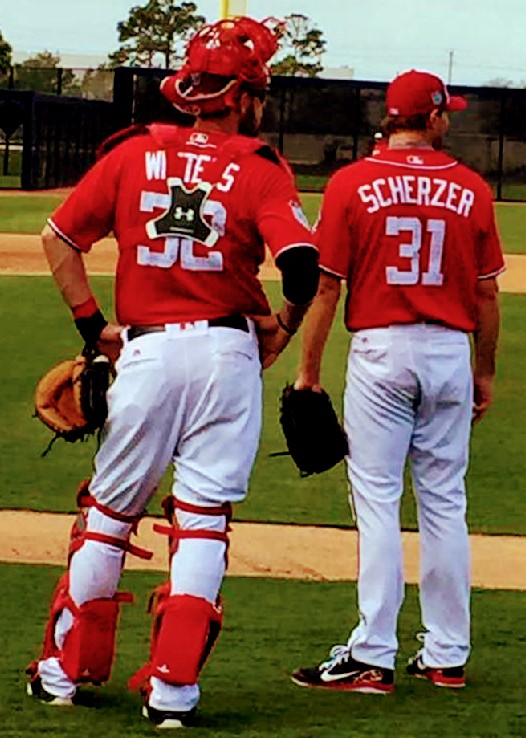 Photo by @MomWithNatitude for TalkNats

Max Scherzer is still nursing that injured knuckle as he recovers from a hairline fracture suffered last season. Scherzer decided that a three-finger grip would eliminate the pain, and he has been perfecting this new grip which he debuted in live BP today.

“Baseball is a game of adjustments,” pitching coach Mike Maddux said about Max Scherzer’s three finger fastball grip. “He has to do what he has to do to compete as this level.”

Maddux said all went well with Scherzer’s outing. That sounds like good news as they wait for feedback from Scherzer when he returns to the ballpark Wednesday morning to report how he feels “the day after”.

Mike Rizzo and Dusty Baker of course were in attendance for the BP session as Max Scherzer threw to six minor leaguers which included Spencer Kieboom, Yadiel Hernandez, Sheldon Neuse, Nick Banks, Carter Kieboom and Raudy Read . Scherzer threw a total of 44 pitches in the session that began before 11AM.

“Max was good,” Baker said. “I was surprised at his command. His breaking ball was good, he threw some good change-ups. He threw some pretty good and well-located fastballs, and that’s his No. 1 pitch. Everything else is secondary.”

While the Nats were getting ready for their 1:05pm spring training game against the Red Sox, this exhibition was clearly the most important pitching performance of the day as the reigning Cy Young winner is as integral to the Nats success as any player. Chris Speier ran the pre-game on the main field to ready the team for the Red Sox game while Dusty Baker watched his ace.

Dusty Baker had a good vantage point for the session and approached it like a scout looking for any clue as to how this three-finger grip was working. Livan Hernandez was also there to observe as he moved around for different angles. Baker was pleased after the BP session finished on the 44th pitch. Scherzer grabbed some water, and Dusty Baker nodded in approval.

“It looked the same,” Baker said about the new fastball grip. “I couldn’t tell if he was using three fingers and I was seeing if I could really see it on the ball. But his arm speed is such where you really can’t pick it up. If that works for him – he’s trying to find a way to make it work. Hopefully, soon his finger will be a hundred percent. Until then, we got to keep his arm ready and the only way we can keep it ready is by throwing. If he’s got to throw with three fingers, then that’s what he’s going to do.”

The next step for Scherzer could be a tune-up in a live game. That could be against minor leaguers or could be a real Grapefruit League game as Scherzer is anxious to get back out there with his teammates.

What did Max Scherzer think afterwards? He was all smiles.

“Things looked right,” Scherzer said. “And that’s what I’m going to just hang my hat on. There’s no difference between throwing the two or three finger grip.”

This entry was posted in Dusty, Scherzer. Bookmark the permalink.
← Previous Article | Next Article →