Florida Report from The Ballpark Of The Palm Beaches: #Nats

Posted on March 6, 2017 by ArVaFan aka Laura Peebles

We made it! First, let’s talk about getting to West Palm Beach, Florida. My first time at PBI (the official call letters for West Palm Beach’s airport). It is a small airport, big improvement over Orlando. First, it only has 3 concourses, which gives you an idea how small it is. TSA Pre-check was not open when we landed at 9 p.m., so my guess is that if you have a late or early flight, you may need to have that 3-ounce baggie ready. Also, if you rent a car, be aware that the rental car return is not marked well for all companies: if you’re renting from Hertz, be sure to follow their map exactly, and/or set your GPS. The airport signs are worthless or non-existent. There is a full Starbucks, hot food, and local beer beyond security (at least in concourse C).

Staying: We stayed at the Homewood Suites on Metrocentre in West Palm Beach. There are several residence-type hotels all together on that street, so pick your favorite brand. 5-10 minutes to the ballpark, although I know some folks walked the 1.8 miles to get the exercise. Breakfast is included, as well as a light dinner Monday-Thursday. Only nit to pick with them is no in-room safe. Lots of baseball folks there: Astros, Nats, and Cards fans; Astros’ staff, international media guy following Ichiro, and at least one player (Giles). Pets accepted (Ken Giles had one of his four dogs there). As far as we know, we’ll be back there next year.

Eating around the hotel/park: Can’t help you there—we ate at the hotel, or in Delray, Greenacres, and Sanibel with friends and relatives.

Difference between Ballpark of the Palm Beaches and Space Coast Stadium:
Access to the practice fields: sidewalks! No more running over lumpy or soggy ground to get to the players. (OK, Field ½ doesn’t have a sidewalk in the back. But the back fence is waist-height because the field is for infield drills only, so it will be great for player observation). 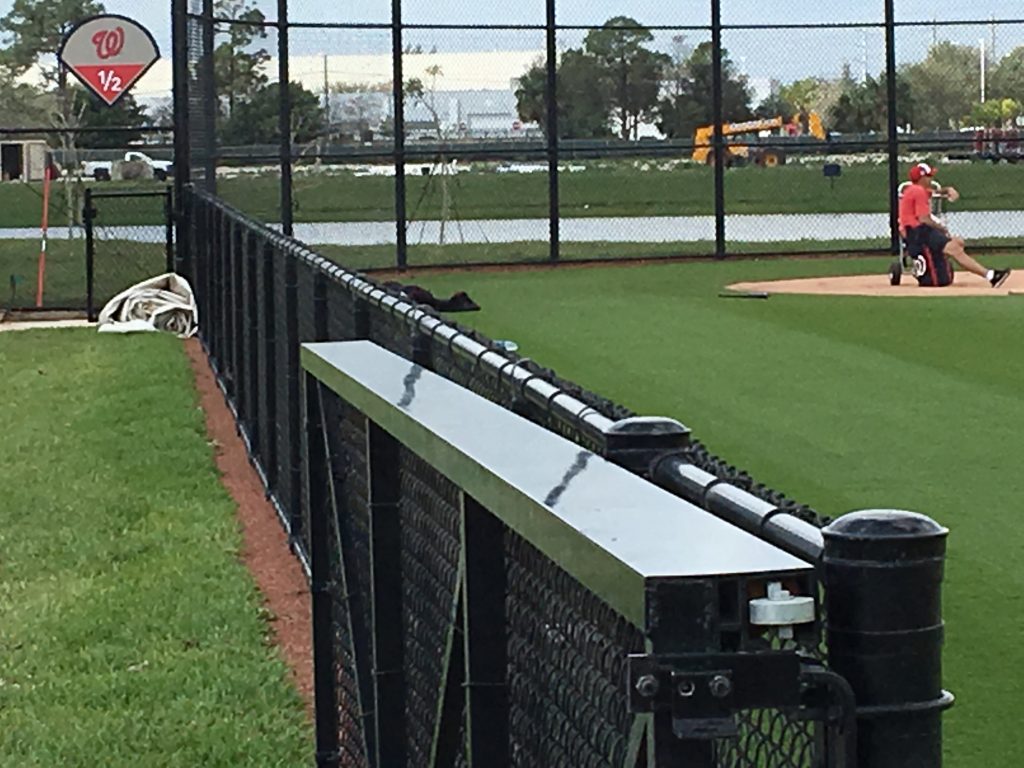 The players do have to go through the public areas to get back to the clubhouse, so have your pens, etc., ready. Although we were there on game days, there were P & C drills going on on a couple of fields that you’d pass going from the parking lot to the stadium, and there were signing opportunities—especially if “you” are a kid. Gio was (1) last out and (2) forgot his shoes. 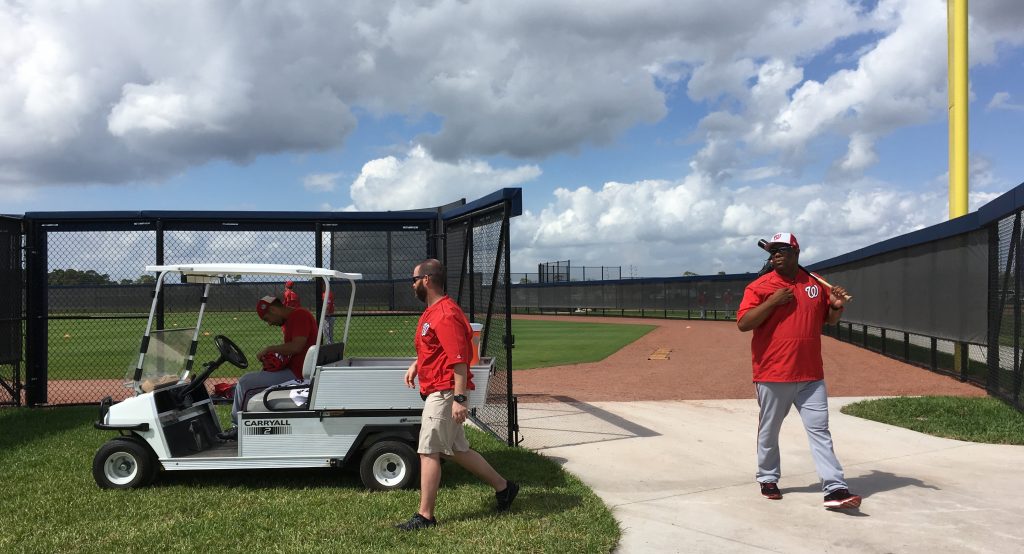 Bathrooms are adequate and more easily accessible from the seats.
Water bottle refill tap available (filtered). Has a cute counter saying how many water bottles it had saved. You can bring in an empty and just refill it there.
Shade. Oooh, yeah! From Row M back on the first base side, shade during the whole day game. If you want shade, check the stadium layout to be sure you get in the sections below the roof. We were in Row M for the 2/28 game (in one of the shaded sections), and had shade for about half the game (the sun was on our legs, not our necks, for about half the game, so that’s definitely the cut off row.) Row F (right at the Nats dugout) does not get any shade. Nats side has more shade than Astros side.
Food and beverage variety: see above.

The announcers don’t play the broken glass sound when a ball goes out of the stadium over the concourse.

With a normal roof rather than a tin roof, foul balls that do hit the roof don’t make that satisfactory “clang” that they used to in SCS. They do if they hit the shade extensions, though.  Speaking of foul balls, two balls hit one of the light standards. Bryce’s bounced back into the stands—so if you’re there, don’t assume that because a ball has disappeared that it’s not coming back down. Murph’s just scared the birds off the light standard.

Speaking of birds, the birds who formerly lived off the landfill haven’t left. Dozens of fish crows and a few raptors are still hanging around, including a couple of crows who landed on the field during a game. Don’t know if they’ll learn the 7th inning stretch song like the seagulls in SF, but it could happen. So far, no nests on the light standards, but a lot of birds sit up there during the games.

You can walk completely around the stadium, including behind the batters’ eye. There’s a great sitting area under the video board.

Teams’ store (plus two kiosks). Available: 20+ W t-shirts, several polos for W and BPB, general ST t-shirts and magnets 2 light jackets, blankets, limited player t-shirts/jerseys, 8 ST hats, dozen W hats, 2 BPB hats, pins for W and BPB, balls, scorebooks, black and silver sharpies, kid’s clothes and hats, 8” soft Screech, kids’ baseballs and mini bats, sunscreen, sunglasses, plastic cold drink glasses with straw, cooling towels, 2 sizes of coozies, shot glasses, golf gizmos, souvenir programs, ST ballpark passport, foam fingers. And I probably missed something. No leftover discounted merchandise, as there was in Viera. Store is larger, but probably not double Viera (remember that it has 50% Astros stuff, other than the sunscreen, MLB and kid balls that aren’t branded, plus all the BPB merchandise). They do give a STH discount on request (remember, that’s 20% for full season ticket holders . . . and no one was checking any records.) 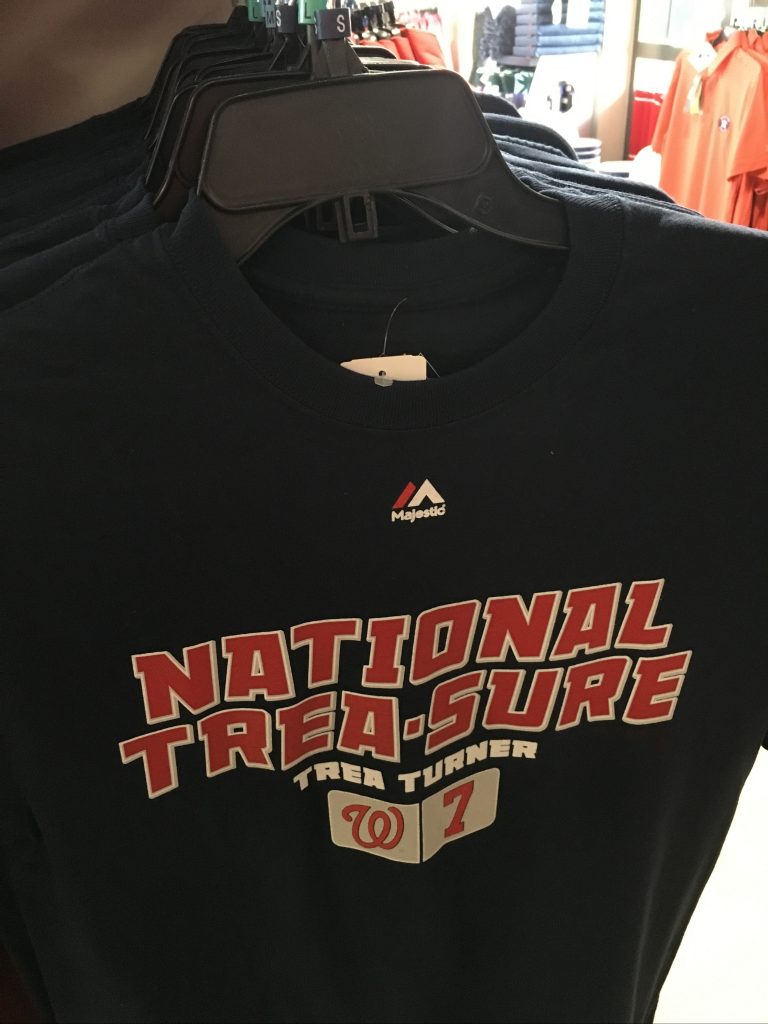 If you think you saw Nationals Trea-Sure before, you did. Right here on Talk Nats a while ago.

Concourses will be big enough to hold all the fans if there’s serious rain.
Netting only goes to the edge of the dugout, not to the far end. But there’s that weird surveillance camera that will block one fan’s view of the plate. Not good if you paid for the front row and you get that!

There’s an area with picnic tables and a kids’ area. It’s fenced so the tossed balls are not as likely to end up on the field. 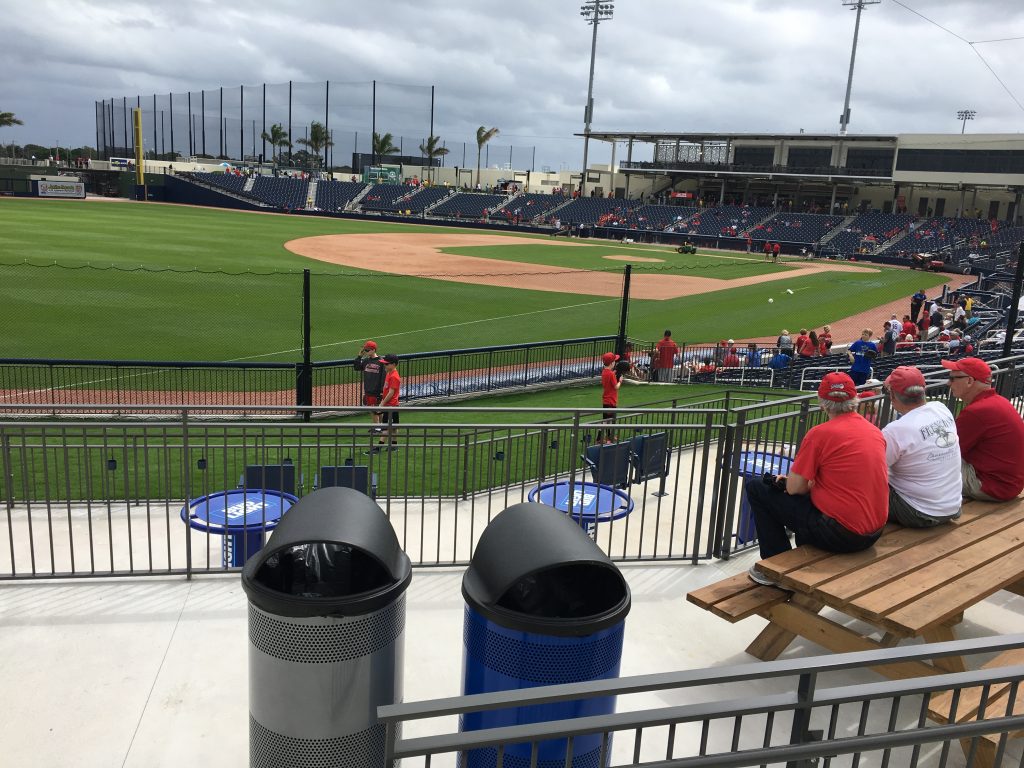 Susan-at-the-gate, who handed out the rosters in Viera, is assigned to the Nats VIP section in BPB. And yes, she still has a gate to mind—the one that goes out to the home plate area. Unfortunately, they put the latch at the top of the gate, so she uses a mini-bat to reach the latch.

Now, about the opening day: it’s amazing that they managed to even have food and beer, given that the vendors weren’t allowed in until about 10:30. So no time to train employees, set up, stock the booths/kiosks, etc. So I’ll have to give them a pass on the, shall we say, bumpy opening (electricians running around, payment system crashed twice, no ice cream, not all the serving supplies stocked, no local brews). But everyone was trying to be helpful. Not everything that was open on Tuesday & Thursday was open on Friday—not sure what was up with that (wind problems, maybe?). And of course there was the shelf that fell on Saturday. I think we ran into a dozen people we knew from DC on Opening Day, including Rubber Chicken Man, who was distributing “In Dusty we Trusty” and “Mighty Mouse” buttons. 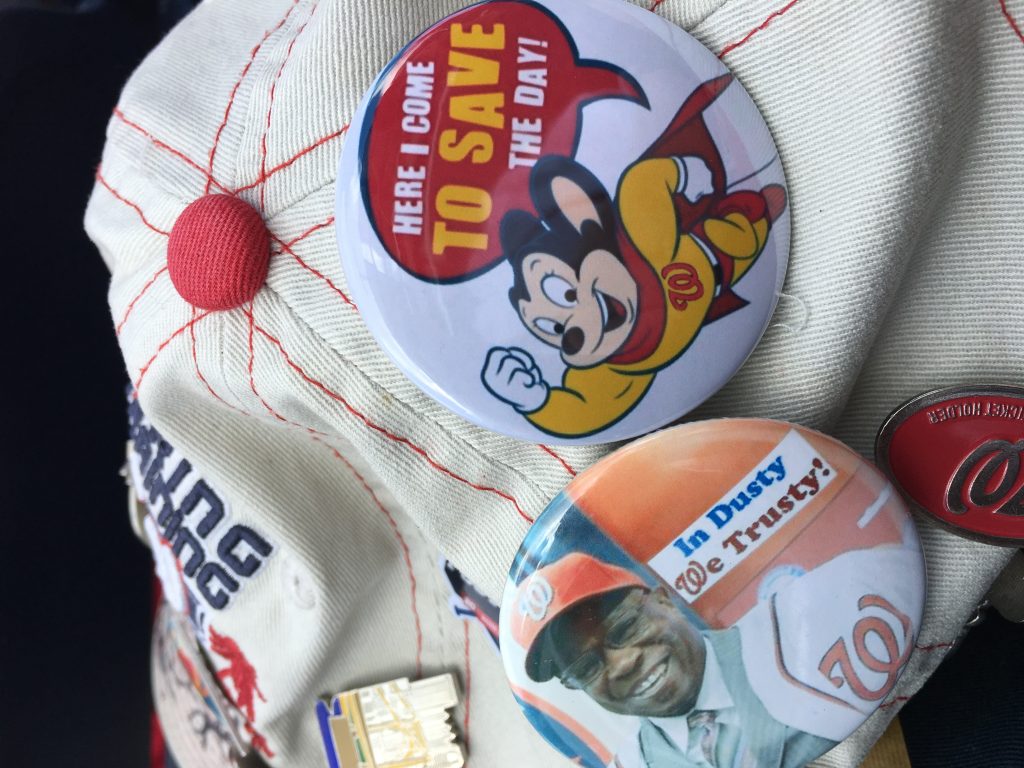 There are clearly some issues to be addressed. Going into the parking field, you navigate the construction site. There is a pile of dead palm trees to be removed, and another pile of green ones to be planted. There’s a giant roll of cable by the back of the stadium near the clubhouse, and a generator running behind the Nats side of the clubhouse area. Then there’s this steel rebar (left over from the landfill?) sticking up in the parking area! That could have hurt, or hurt a tire. Someone did trip over it, but no injury.

@BPPalmBeaches FYI: Huge piece of rebar F4 or F5 between 2nd & 3rd row back in parking lot between Haverhill & Military on the Nats side pic.twitter.com/Fw545RodCf

The vendors on the Nats side were having trouble reading their computer (payment) screens: someone didn’t think about the need for shade for them on sunny days. On Friday morning, the video screen showed the Nats and Astros Thursday lineups, with the Nats/Cards only in the bottom section of the board. But they did get it fixed before the game started.

Switching topics, let’s talk about how the stadium was different when the Nats are the away team (other than reminding Jayson why he’s wearing grey pants). There’s only walk up music for the home team players, the mascot is only for the home team, the fan contest/giveaways are different (the Astros “hide the baseball under the Goya bean cans” game is much harder to follow than the Nats’ three bases), the non-local audio announced ads are different, and the video board is different.

The video board is SO improved from Viera: it has most of the stats that the DC board has (other than pitch type is not shown). However, the radar gun was only working about 20% of the time, so that wasn’t real helpful. Given that it’s ST, there are a lot of guys with no names on the back of their jerseys, and no photos on the board. But they do put up the ST stats (BA, R, HR, RBI) for the batters. When the Astros are the home team and their pitcher gets a K, a cartoon astronaut floats down and plants a K flag on the moon to the 2001: A Space Odyssey theme (yes, I know it has another name, but I’m not fighting that with my spell-check).

When the Nats hit a HR, the Navy klaxon submarine dive horn sounds (and on opening day, there were enough Nats fans to do the proper cheer) just like the Nats have done in Nats Park since 2011 as an homage to their Navy Yard neighbors, and it is a nice touch that it has been replicated in The Ballpark of the Palm Beaches for Nationals home games. Note that the logos on the field near the dugouts are the FL logo, not either team logo. The team logo is on their practice field(s).

This entry was posted in Analysis, SpringTraining. Bookmark the permalink.
← Previous Article | Next Article →