Opening Day at The Ballpark of the Palm Beaches

The Ballpark of the Palm Beaches is a winner, a really nice job done by West Palm Beach, the Nats, and Astros. Beautiful ballpark. (Any critiques in this piece should be taken with the understanding that the good far outweighed the room for improvement.) 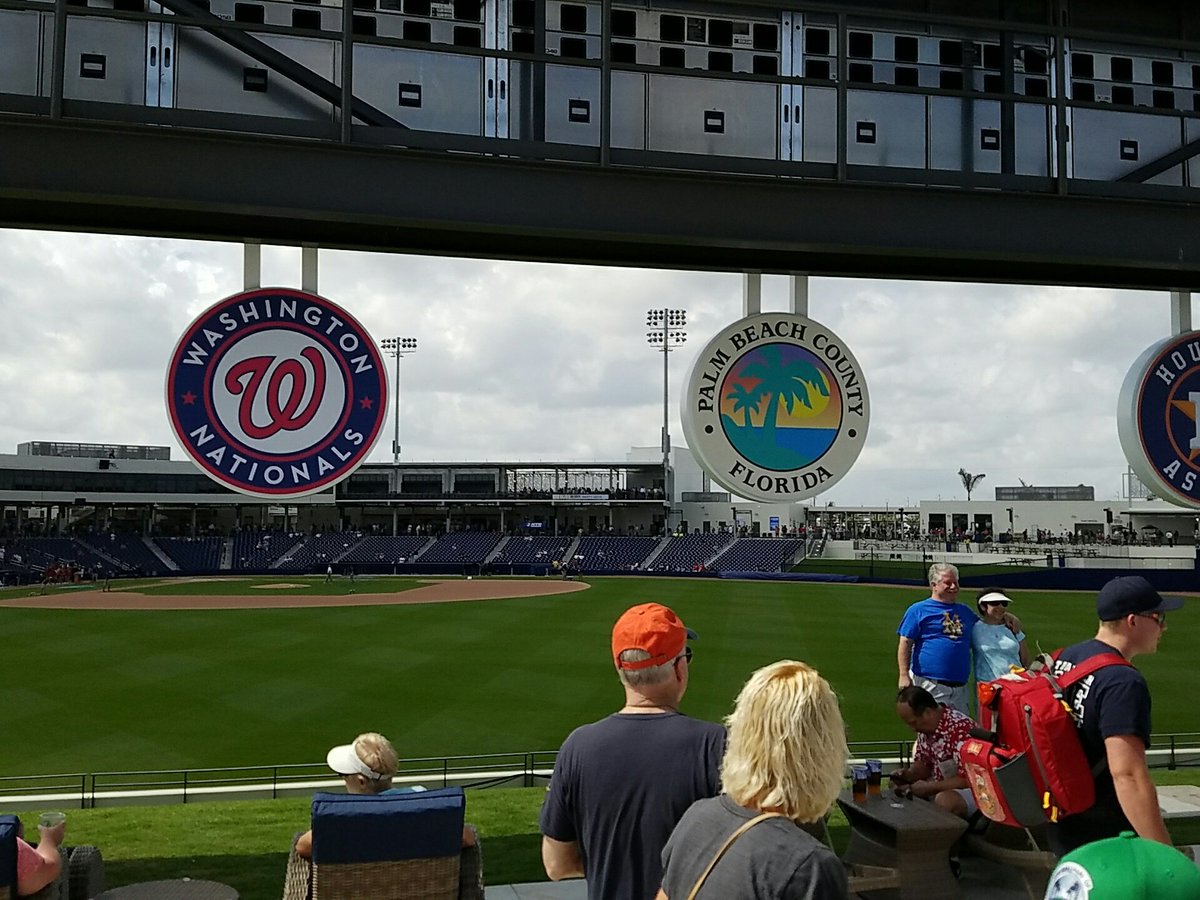 View from behind the scoreboard

What a finish! You all watched it on TV so I won’t include game details, but wow! Ryan Zimmerman walked off the Braves to open Nats Park and now Michael  A. Taylor has walked off the Astros to open The Ballpark of the Palm Beaches.

Depending on where you park the practice fields are laid out so that you walk between them to get to the ballpark. This is where I parked, although it seemed like most people were in the lot closer to the ballpark entrance. The gates opened at 10:30 sharp for everyone to walk around before the 1 PM start.

The closest two fields are used for batting practice. The one issue here is the number of fences between the fans and the players, BP is not the most exciting thing in the world to begin with, add a couple fences, a wind screen, and some distance and it can be tough to watch for too long. 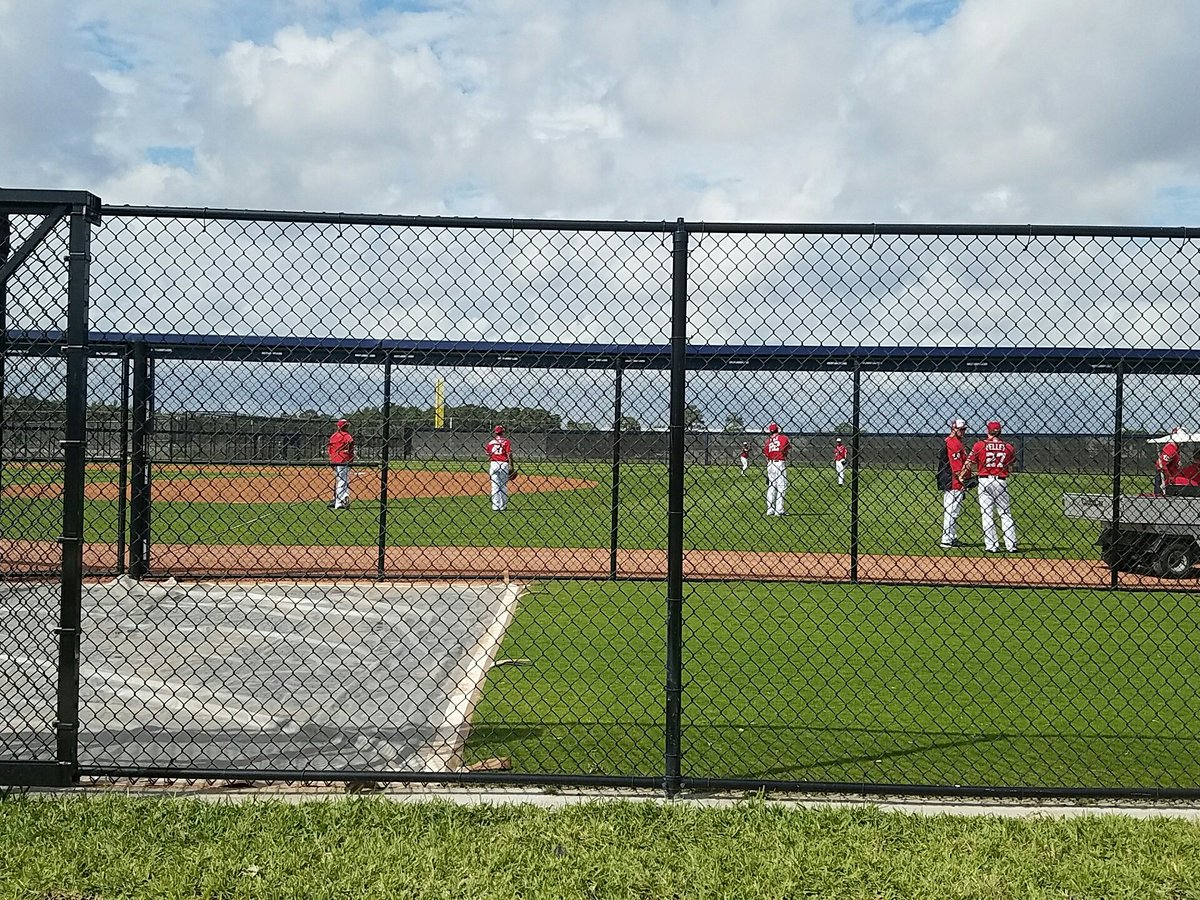 The real excitement was when the players and coaches walked from field to field. The attendants would rope off the sidewalks so that the players could pass by. Lucky fans were able to get autographs as this was the closest you could get. I called to Snyder that Baker had singled him out as one of the guys to watch this spring, he replied that he was just working on his game and doing the best he can to get better.

The gridiron area was used for team stretching before heading out to the practice fields. The pitching area was the worst for watching the players, a lot of distance between the fans and the practice area and windscreens on the sides so you couldn’t see much. Good autograph area, but watch out, a ball from the batting practice field landed right by us. I also had Jeremy Guthrie randomly toss me a ball, funny thing was that his practice ball was a heck of a lot cleaner than the ball I got that was hit foul during the Cards/Nats game the day before. 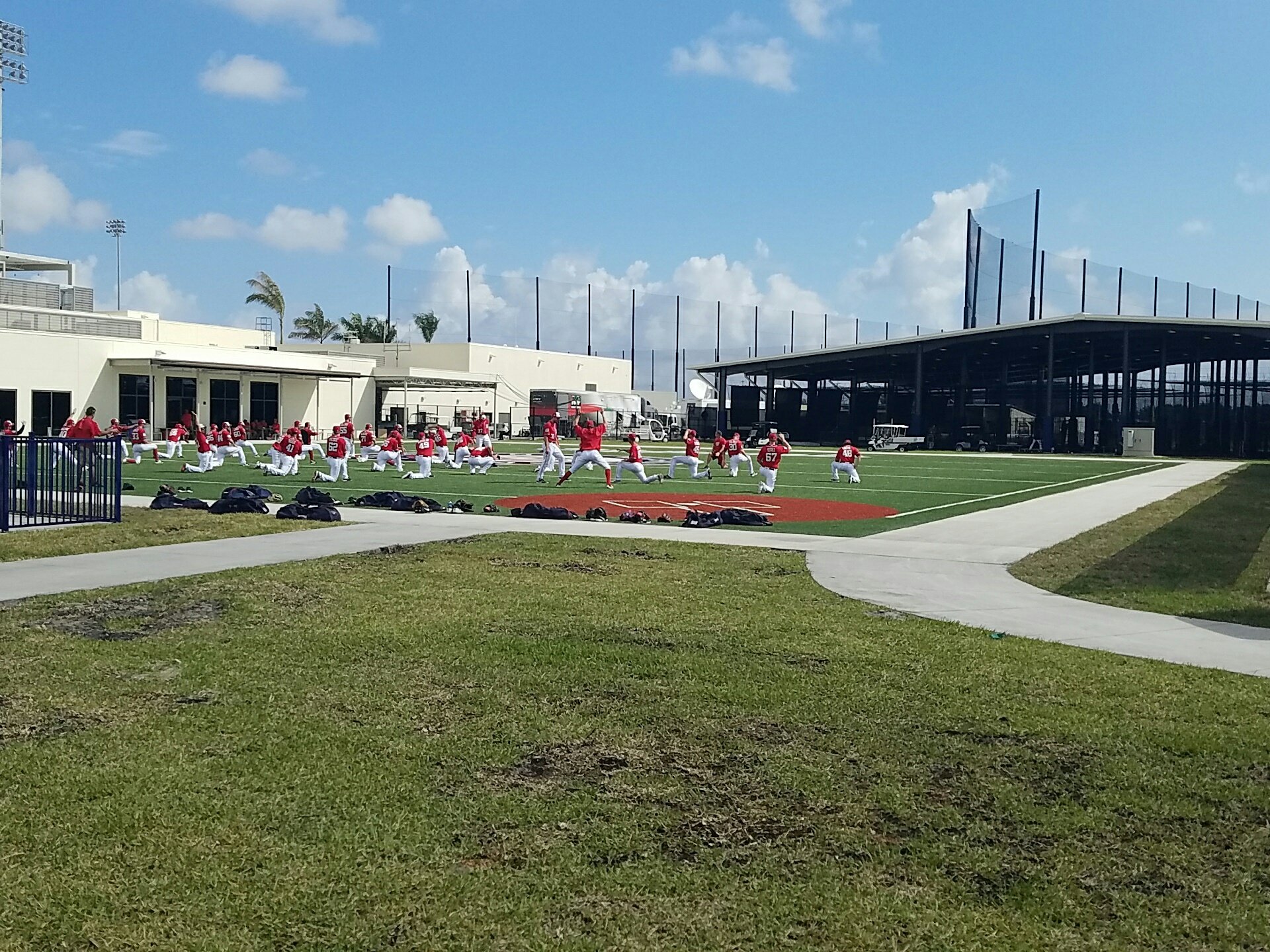 Pitchers stretching on the football field

The fielding practice area was the best place to get close to the action. Only one fence and it was low. By far the best view of the players and probably more interesting than the batting practice. 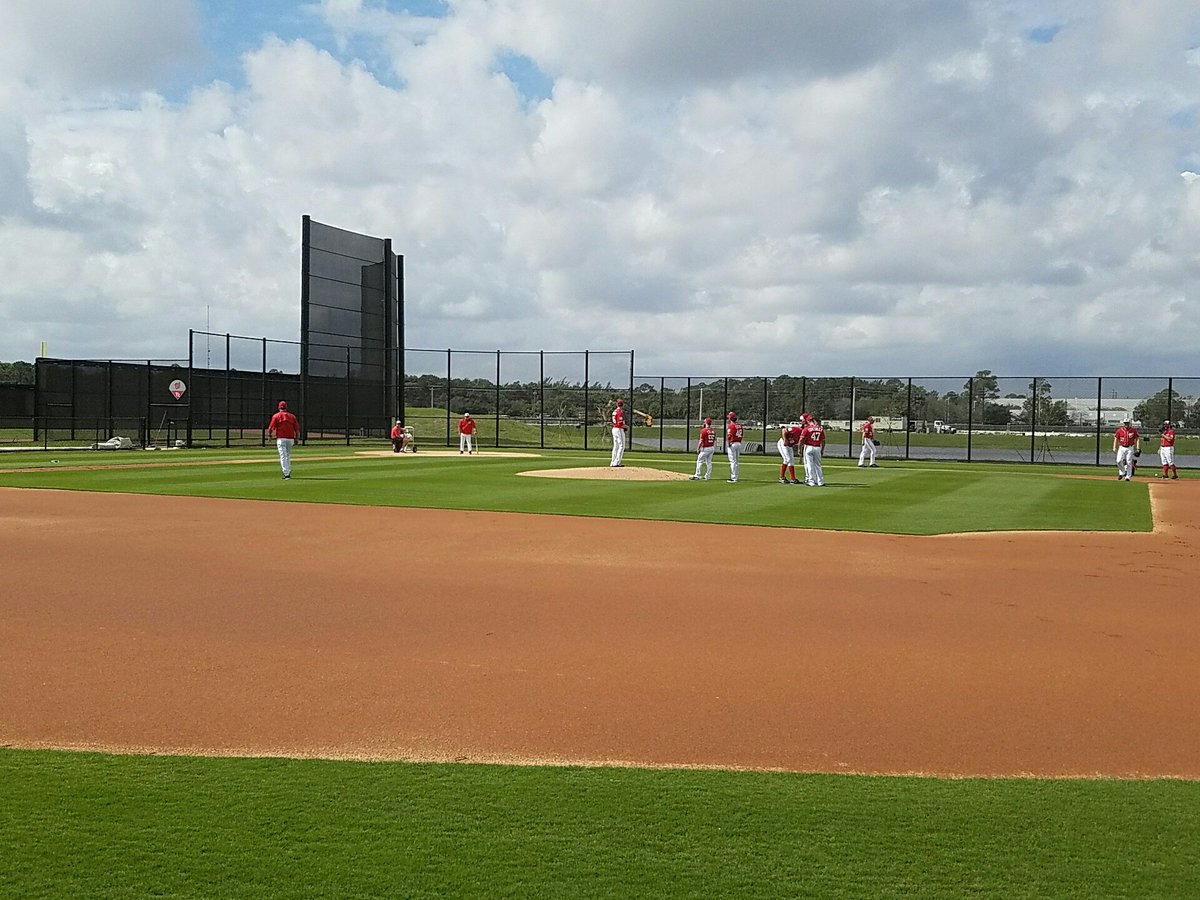 No tailgating at the ballpark (boooooooooooooooo!!!!). You can buy beer to walk around though. Even better, they sell Stella, Becks, and a few variations of p… water. Even better, bring your own Stella and koozie, as long as you have the brands they sell who’s to know?

The Ballpark of the Palm Beaches

Walking from the practice fields you cross a small bridge with some cool baseball themed decorations. The “Big W” is off to the left in the main parking lot. Lots of little flourishes around the park giving it a nice unique look, not just utilitarian. Metal screens with little ballplayers cut out all over the place, those must have cost a buck or two. 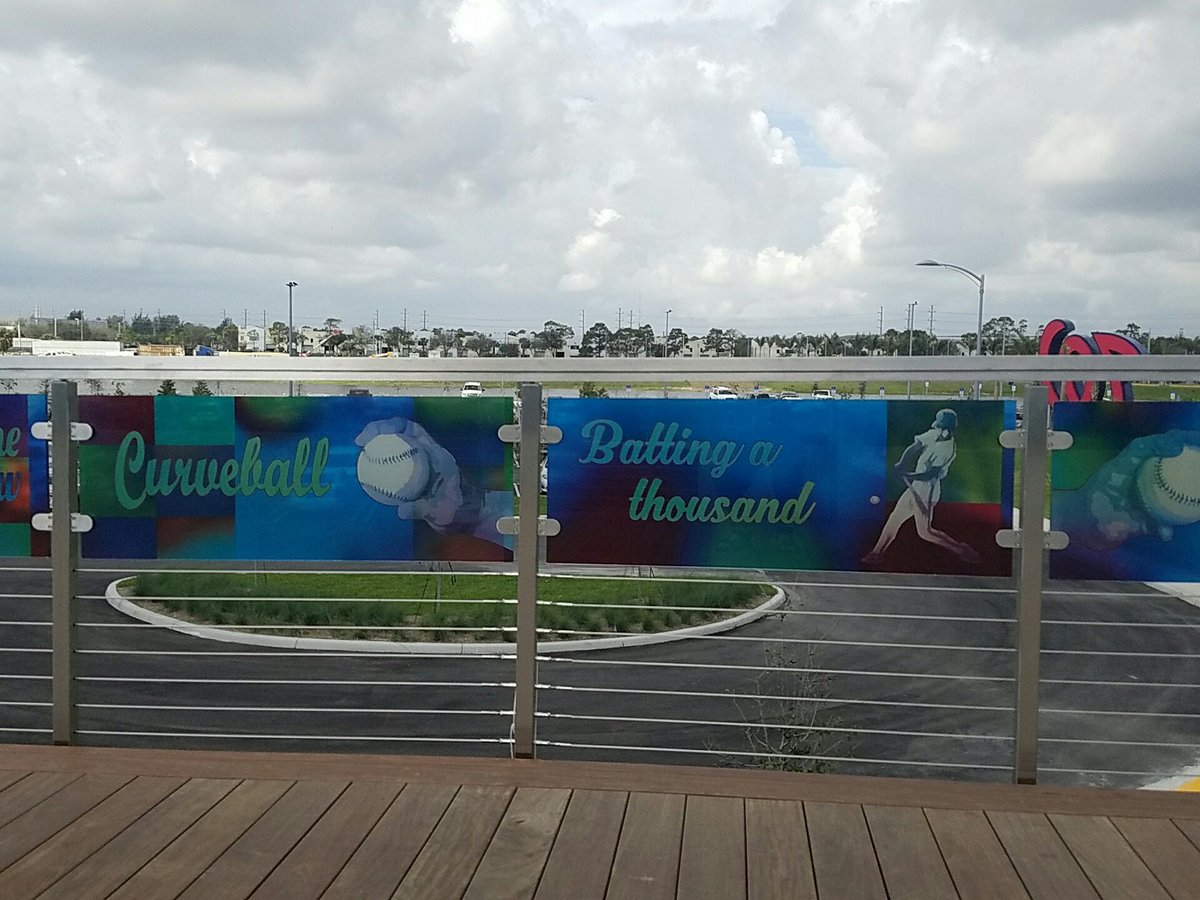 You have to go into the ballpark to get into the team store, which was a bummer, I wanted to buy stuff and then take it to my car before going in. The store was a nice size (the line was not). It seemed like they had more Astros gear than Nats. Lots of hats, lots of shirts, pins, and all sorts of other stuff. The items I like is where they mix the Nats logo with Floida themes. They had a few really nice hats, a red one with a curly W in front and palm trees all over.

They do have two smaller team stores on opposite corners of the ballpark with all of the best stuff, no lines at all.

You really can walk 360 degrees around the ballpark and see the field from everywhere. A nice little stroll before the game to see all the fans and the food options. You can see the Astros practicing on their field behind the scoreboard. There is an upper deck party area but it looked like you needed an invitation.

The bullpens are great, for the players, hard to see for the fans unless you were standing right above them. I really wish they had put them on the field just past the dugouts like they have at Roger Dean stadium. Much more enjoyable.

I lucked out today, they have not installed the screens fully across the dugout so I had an unobstructed view. My understanding is that at some future point there will be screens extended to the end of the dugouts (boo again). One major annoyance, is that there is what looks like a security camera extending up from the front of the dugout where Baker stands. For some fans this blocks the view of the batter, for others it blocks the view of the pitchers or third base. These are premium seats, why would the teams intentionally block our views? 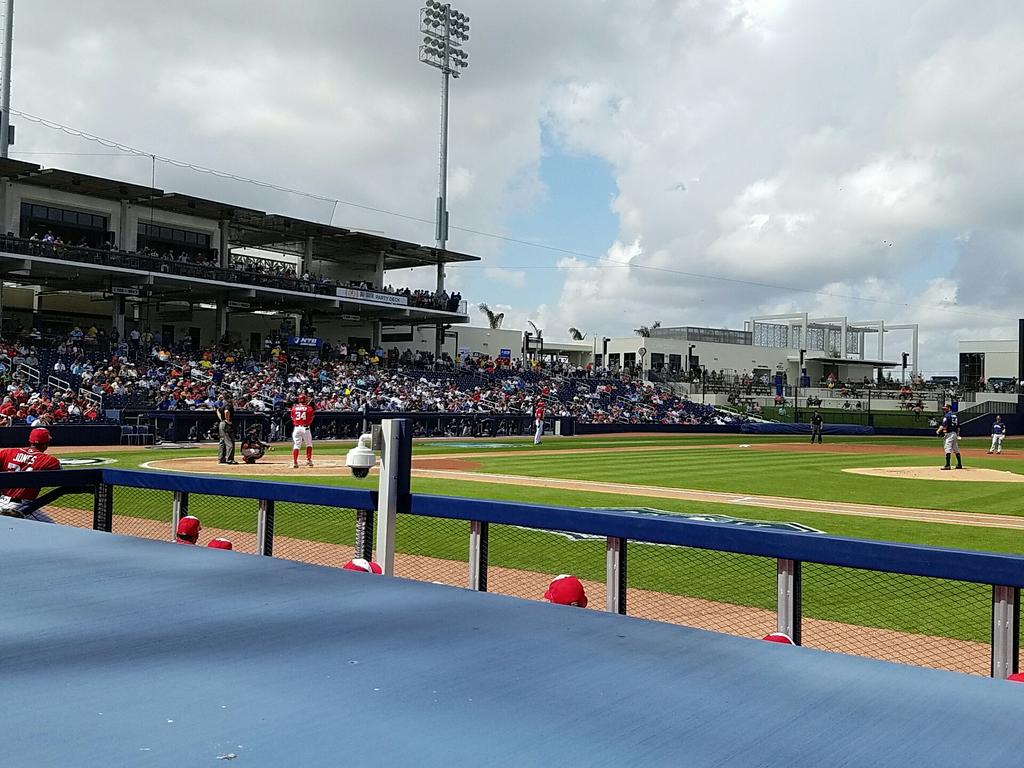 The ballpark is very small (Yes!), exactly what is needed for spring training, I was in a really good seat, but you could sit anywhere and have a great view. As the game went on and the backups came in the entertainment was supplied by the kids on the left field berm rolling down the hill.

It was hot and sunny, with relief only from the clouds on the Nats side of the ballpark. The Astros side was shady for most of the game. Nats fans on the home plate side of the dugout were shaded about halfway through the game.

Maybe I’m over-sensitive, but the MASN guy working with Dan Kolko was wearing an Os hat on the field. Is that really necessary? Seems like the Nats could tell the MASN crew to leave their Os gear in the van.

No complaints here, they got the ballpark open, quite a feat. I complemented the staff at one stand for doing a great job, even though they had a long line of impatient fans and unprepared food to deal with. 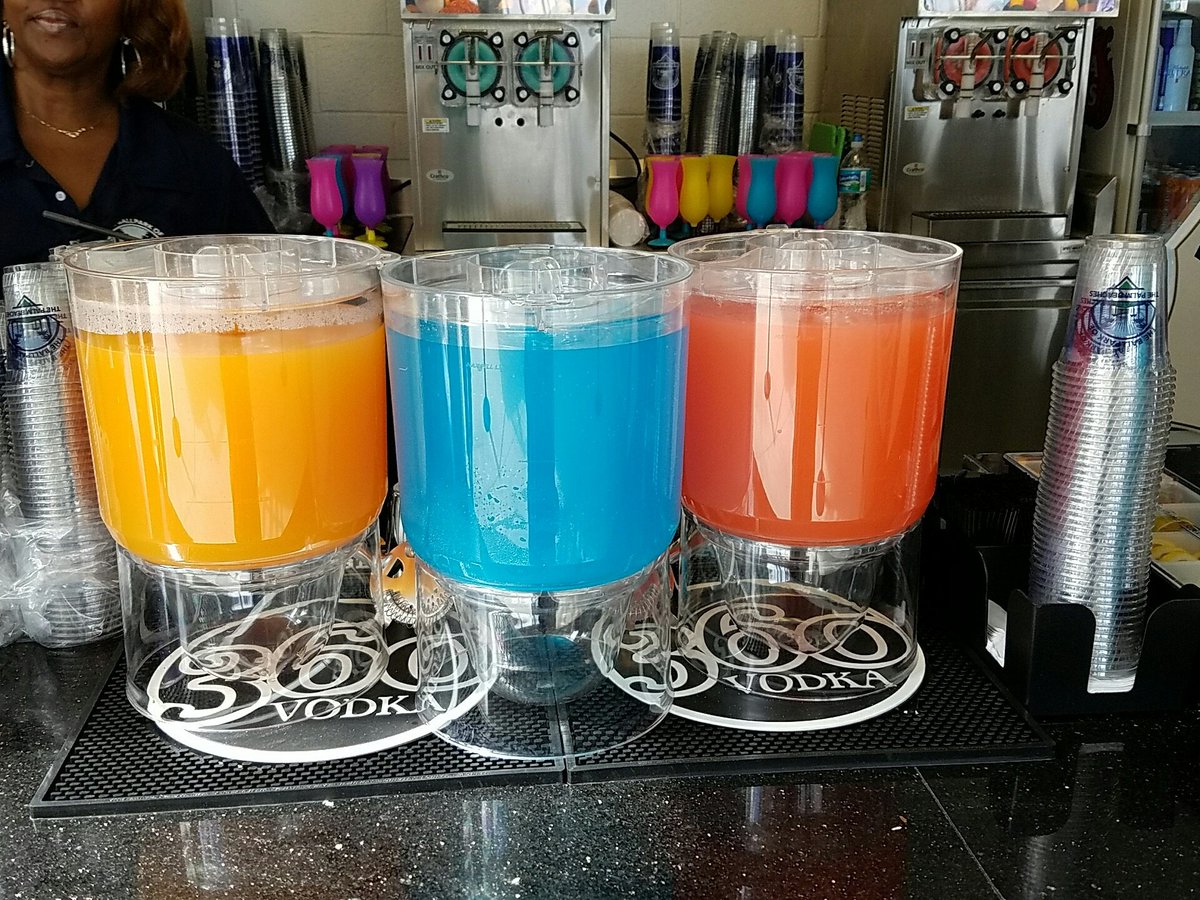 One minor detail that needs to be fixed is that the H-Town Grill is behind the Nats dugout and the Capitol Grill is behind the Astros dugout. Just switch the signs and it is all good. The lines at both places were enormous (even though the park was not sold out), so we didn’t get close enough to check out the menus.

The Liberty Bell stand was a little hard to figure out. I asked the attendant whether the Liberty Bell was from DC or Houston and she informed me that it was in Houston.

They had stands out in left, center, and right field that all were opening less than an hour before first pitch. The beer was ice cold and so was the food. Once again I really have to say that the staff at the stand I was at were really nice and they made sure that the brats were fully cooked before serving. I was a bit disappointed that they didn’t have the advertised PB Half Smokes available, I wanted a half smoke and I was curious to see the PB twist. We went with the $12 giant hot dog, I couldn’t finish the whole thing, not only were they ready first but the assumption was that pre-cooked food was safer. 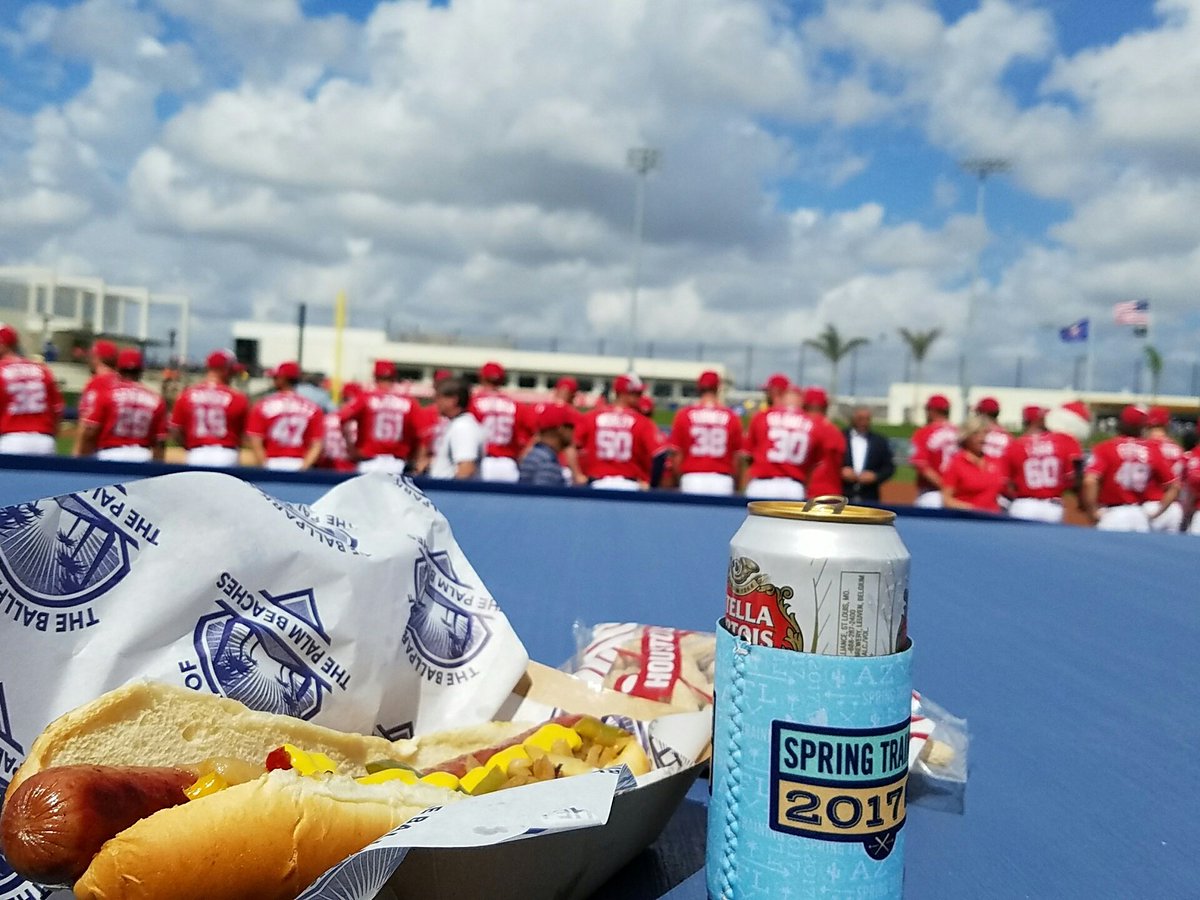 Beer and a dog on the dugout

All of the lines had major delays because they could not take credit cards, hopefully they’ll get the WiFi corrected sooner rather than later. I had cash so I was able to get through but lots of delays and lots of people turned away.

There were a number of stands not ready to open and a full bar area still under construction.

Beers were Bud brands, similar to Nats Park but without the local brew options. Nothing to complain about, Stella, Bud, Mich Ultra, and Wild Goose IPA. A couple places had Magic Hat #9 too.

A guy standing next to us at the hot dog line was upset about the lack of ice cream, his daughter was not happy at all. Young baseball fans will be thrilled with the ballpark but kids along for the ride with Daddy will find not as many treats as Nats Park and no playground area. The Astros had a great kids zone in Kissimmee so I’d expect this is something that gets fixed for next spring. 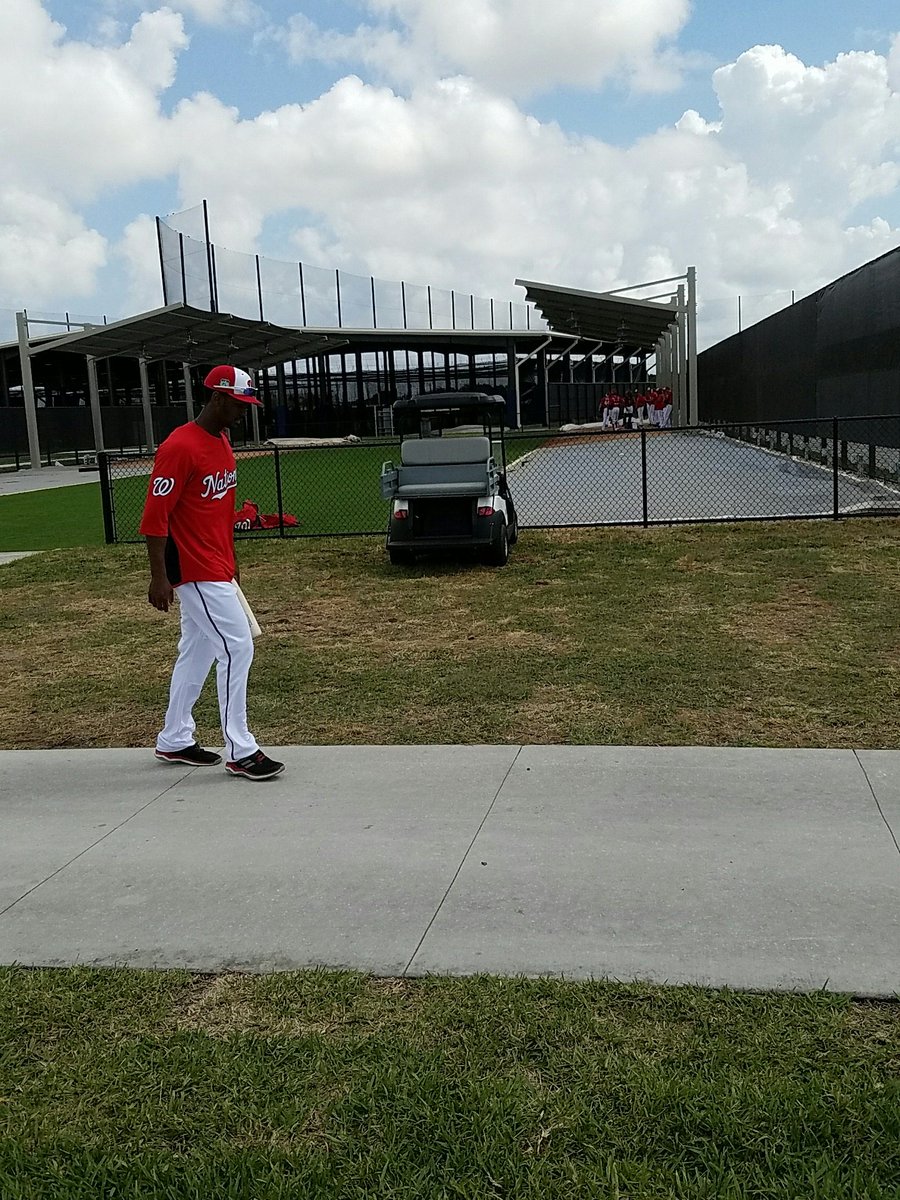 MAT before he walked off