Posted on February 23, 2017 by Virginiascopist 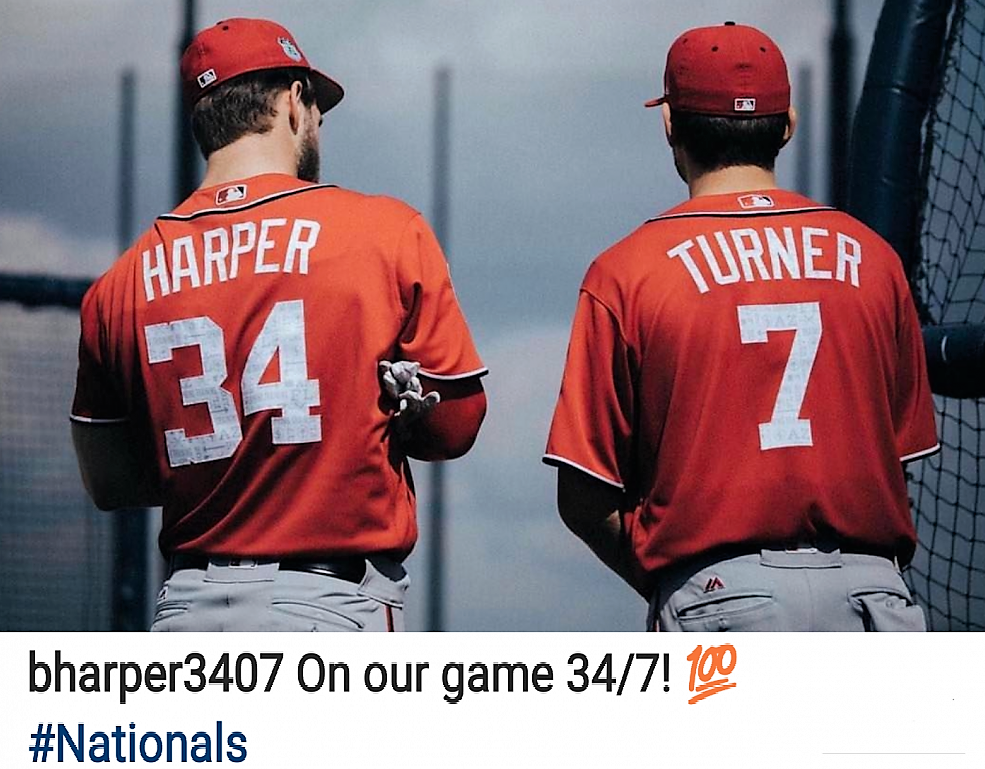 Bryce Harper and the #BPE aka Trea Turner are roomies in Spring Training and Bryce posted up this 34/7 photo on his Facebook page, Instagram and Twitter. Besides posing for pictures, Bryce has been doing the Q&A rounds with the media. Here are some excerpts for you.

QUESTION: Saw your video of you deadlifting 500. Was that your personal best? Did you go beyond that? (Editors note: Get it right, it was 505 pounds.)

BRYCE: I had a great off-season. You know, I think being able to go in and do everything that I was able to do, be as healthy as I could, and just really, you know, work every single day. You know, that’s the thing you want to do during the off-season. And I was able to do that this year at Philippi’s (Philippi Sports Institute of Las Vegas) and, you know, had a great off-season and, you know, did everything I could to be ready to play this year, and I felt great.

QUESTION: What was your emphasis this off-season? Was it bulking up? What kind of things did you work on specifically?

QUESTION: How does your physical state compare with, you know, how you felt before? Is this the strongest you’ve ever been?

QUESTION (follow-up): Do you do yoga? You did some yoga?

QUESTION: Bryce, how long after the postseason ends are you kind of over how it ended and move on from that?

BRYCE: I mean, after we lose, you know, day after. I mean, you can’t really change anything so, you know, Dodgers beat us and, you know, that was 2016, so you know, the day after, you’re going home, so you better get over it as quick as possible because they’re going on and they’re doing what they need to do to, you know, get better as a team, and that’s what we did.

So, you know, just trying to get by, get past it, you know, have some fun at home. Had a lot going on this off-season, of course, so, you know, had some fun with that and enjoyed that so yeah, I was over losing to the Dodgers the minute we lost, so it’s just part of the game, part of the process, and hopefully we can, you know, do some things different this year and get going.

QUESTION: How did your body feel at the end of the season?

BRYCE: It felt good. You know, felt great in the playoffs. Thought, you know, we had a great run at the end and, you know, I think you know, it just didn’t go our way. So just got to, you know, try to maintain this year and do everything we can as a team, as an organization. Got a great group of guys and excited to, you know, get going.

QUESTION: Bryce, you’ve always been a student of baseball swing. Did you study tape of yourself last year and did you find anything to explain any problems?

QUESTION: What do you think of your team’s moves this off-season and kind of what you guys getting Adam Eaton and other things?

BRYCE: Yeah, I’m excited for the move down to West Palm, to tell you the truth. That’s my biggest move I’m excited about. So excited to be down here, excited to, you know, get going in a new place with some great fields and, you know, cages and great weight room, finally, and a little pool over there, so hopefully do some cannonballs in there a couple of times on a hot day down here, so.

QUESTION: You probably know Nats Park like the back of your hand, but how does having two fields that are identical help, do you think, down here?

BRYCE: Yeah, I mean, I just found that out yesterday, so I mean, that’s pretty cool. I mean, I don’t know how it’s going to help at all. I mean, you still got to hit the ball over the fence and, you know, do certain things. I mean, you know, you don’t have the crowd that, of course, you’re going to have at Nats Park, so a little bit different. But it’s pretty cool to have that, you know, definitely. You want to practice on those dimensions. Of course, the guys that are young, possibly in the minor leagues that are going to get called up this year, I think they’ll take full advantage of that and be able to see the dimensions and get a little feel for it and hopefully be ready to go when they get up there.

QUESTION: As you inch closer to free agency, how do you stay do you just stay focused on where you are right now? Do you find yourself looking ahead at all?

BRYCE: No. I mean, I think you know, we got the group of guys to win, and that’s our biggest goal here. You know, you want to win every single day and not look ahead, not look behind, and live in that moment, live in the day. So, you know, being a Washington National, I love it. I mean, I enjoy playing in the city of D.C., and I enjoy the fans, I enjoy the, you know, organization so much. Mr. and Mrs. Lerner gave me an opportunity when I was 17 years old to play major league baseball, and, you know, I remember Rizzo coming out and watching me play at CSN and, you know, him seeing me for the first time, him and Bob Boone.

QUESTION: And the other thing, this is just because I cover Syndergaard,  he made that comment (douche) to you on Instagram . Do you know what that was all about? Was that a joke? Was that for real? Do you know anything about that?

QUESTION: Did you watch the rest of the postseason last year, and any thoughts on what the Cubs were able to pull off?

QUESTION: Do you feel like you know why your production last season was not what you would like it to be?

You know, Murph had an MVP season. You know, I was able to hit behind him all year long, and that was a lot of fun for me. You know, able to see that and see him perform and I mean, everybody asked, you know, what was your favorite thing last year? And it was watching Murph play, Murph and Trea and, you know, seeing them do what they did, and Murph coming out and doing what he did every single day, and Trea as well. You know, we’ve got two MVP caliber players in there, with Trea and, you know, Murph, so it’s going to be a lot of fun to hit behind them again this year, hopefully, or, you know, hit in front of Murph, maybe, you know, get a little protection by him.

QUESTION: A year ago you were the defending MVP. When does that feeling of being a defending MVP does it ever have an expiration date?

QUESTION: Hard to believe it’s been five full years for you, but you’ve done great things, rookie of the year, MVP, best that can be. But you’ve had a couple of years where you’ve had injuries, slumps. When you came into the game, did you think it would be, emotionally, this much of a roller coaster?

BRYCE: I think it’s more of an emotional roller coaster for you guys than it is me. You know, I enjoy what I do, so I’m 24 years old, living my dream every single day, and I enjoy what I do. I enjoy playing in the city of D.C., I enjoy going back home and enjoying my family in the off-season. You know, I was able to marry my beautiful bride this off-season as well, so everybody that said I was worried about baseball this off-season I could care less. You know, I think doing everything I could possible to enjoy my off-season and enjoy my family.

This was definitely one of the best off-seasons I’ve had in a long time, so I actually enjoyed this off-season a lot more than, you know, my MVP year, so, you know, it’s something that I enjoyed doing this off-season, and wouldn’t take anything back.

QUESTION: You’re pumped every year. It seems like you’re even more pumped this year.

QUESTION: You said you came to a conclusion about what was different last year than the year before. What conclusion was that?

QUESTION: When did you figure out what to use your word, exactly what was wrong last year?

QUESTION: Being an old married man what have your other teammates said about?

This video embedded below is where Bryce discusses Jayson Werth with WJLA’s sports anchor Erin Hawksworth who turned in some of the best video of the week.