Roster Analysis of the current #Nats

When analyzing the 2017 Washington Nationals roster, we turned to FanGraphs to analyze how they projected 90 wins for the 2017 Nationals team.

FanGraphs compiles their win totals from cumulative WAR based on the 40 man roster players and projecting playing time and positions, and of course a myriad of offensive and defensive statistics.

Here is the projected 2017 Nationals breakdown of position players with plate appearances and WAR: 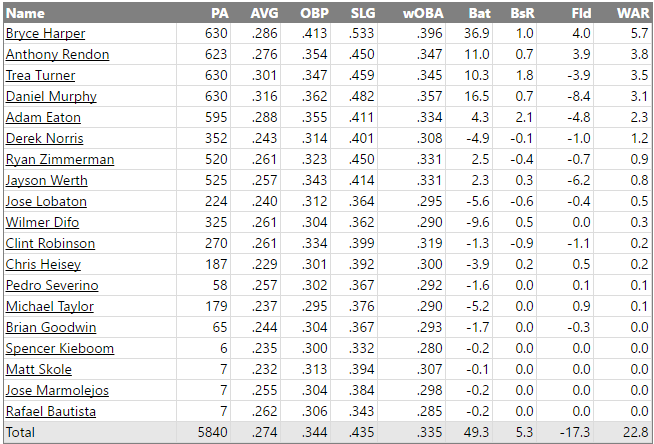 In order to improve these statistical models, Mike Rizzo is going to have to acquire higher WAR players to replace Clint Robinson and Michael Taylor for example.

FanGraphs is somewhat bullish on Ryan Zimmerman as they believe he will have a +0.9 season compared to his -1.3 season last year. That is a +2.2 improvement. Can Zimmerman turn it around this season?

FanGraphs is also projecting Jayson Werth as a positive with the bat but a major negative with the glove.  The same with Daniel Murphy who is projected as the Nationals worst fielder in 2017. Murphy is still projected as a +3.1 WAR based on his strong offensive numbers.

One of the possibilities to improve the team is using defensive replacements late in the game for Werth and Murphy.

With all due respect to FanGraphs, baseball is played on the field, and projections don’t always match reality which is why we play the games.

What can Mike Rizzo and Dusty Baker do to improve this current team?