In 2016, the Washington Nationals used their 2nd round pick (58th overall pick) to select Sheldon Neuse. His last name so everyone knows is pronounced like the word ‘noisy’. The former college shortstop and reliever, who had a 94mph fastball for the Oklahoma Sooners, had a solid bounceback 2016 season with the bat for the Sooners where he slashed  .360/.465/.646/1.111 with 10 home runs. Neuse received a $900,000 signing bonus and began his pro career in the short-season New York-Penn League where he slashed .230/.307/.341/.648 due to hurting his hamstring. Those numbers are part of a small sample size, and while those numbers in his first pro season look below average, the scouts liked what they saw and moved Neuse up the prospect rankings to #4 overall. 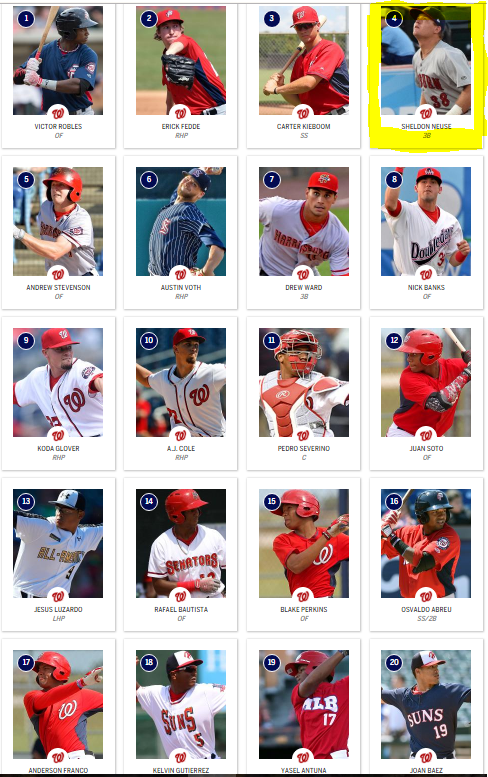 Those scouting grades are on an 80/20 ratings scale system withthe 80 at the top and 20 at the bottom. 50 is average. Neuse right now is rated as average on most tools and above average on his arm. The scouts feel he needs work on his fielding, and he will improve. The scouts also believe Neuse’s offense will improve. It takes time, and Neuse will have time to keep improving.

Sheldon’s dad Shane Neuse was a Junior College walk-on for their baseball team and later played in men’s beer leagues. Shane learned the game of baseball by playing it. When he had children, he coached them, and he coached Sheldon in a travel league of select players who were basically a traveling All-Star team. From travel ball to High School in the Dallas Ft. Worth area, Sheldon finished strong every year and really never had any adversity until his sophomore year in college for the Oklahoma Sooners when he struggled most of that season. Neuse was considered one of the best college hitters in the nation as a freshman, but then saw his sophomore OPS drop to .766 from .890 during his freshman season.

“Mentally, I think Sheldon was trying to do too much [during his sophomore season],” Shane Neuse said. “If you can define exactly what it is, you wouldn’t have that problem. Once you have a little success you sometimes try to do more. Sometimes some failure is what you need.”

Failure did seem to work because Neuse had his best college season as a Junior at Oklahoma and was on many team’s draft boards and chose of course by Mike Rizzo in the 2nd round this year. Sheldon, as mentioned, went to the New York-Penn League with the Nats after signing his pro contract and after the season ended was selected for Fall Instructs in Viera, Florida. He learned a lot and progressed even further.

As a High School player for Fossil Ridge in Texas, Neuse was described as an athletic kid with a power arm and a power bat. Neuse’s big break came when he took part in the USA trials in Florida when he was 15-years-old, and he got chosen for the 16U team as a pitcher. It put him on the map. Alex Bregman, Albert Almora, and Corey Seager were notable teammates on their 16U USA Baseball squad that played teams from all over the world.

“I had some great opportunities when I was younger,” Sheldon Neuse said. “We had a really good team.”

What might be more notable are the players who did not make that 16U team like Addison Russell and several others from that same age group. You can click on the names with links to see what that team was like as this was the roster of that 16U team: Albert Almora | Cole Billingsley | Sean Brady | Mark Brakeman | Alex Bregman | Ryan Burr | Chris Chinea | Troy Conyers | Zach Green | Carson Kelly | Timmy Lopes | Adrian Marin | Sheldon Neuse | Chris Okey | Matt Olson | Ivan Pelaez | Felipe Perez | Nelson Rodriguez | Corey Seager | Lucas Sims | Nick Travieso.

“I am working hard and learning as the move to third base is different than shortstop,” Sheldon Neuse said. “I hurt my hamstring two weeks into the New York-Penn League and rested it and hurt it again…I’m fine now and instructs went well. I can’t wait to get to Spring Training.”

Baseball prospects are works-in-progress, and that is what Sheldon Neuse is.