Danny Espinosa’s tenure with the Nats ends with a trade 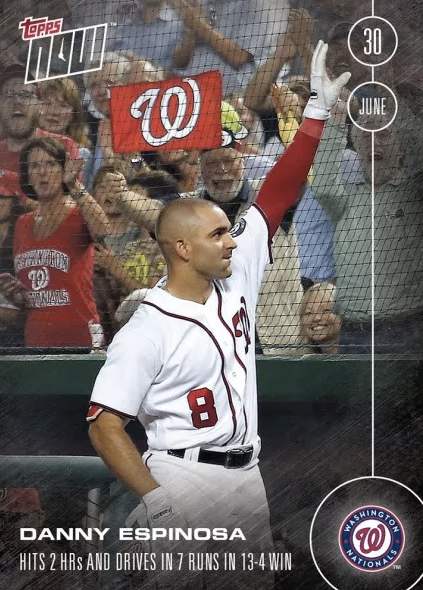 For anyone paying attention, the inevitability of a Danny Espinosa trade was almost a certainty at some point in this off-season, and the acquisition of Adam Eaton was the necessary step to put it in motion. The Nationals were going to acquire one key player for either the outfield or middle infield to improve the team which would make Espinosa expendable. It was the domino effect, and once Eaton was officially acquired, Espinosa’s trade was put in motion.

Don’t think for a second that headline late yesterday in the Washington Post about “Angry Danny Espinosa skips Nationals Winterfest after club trades for Adam Eaton” as the trade was already in the works and no team wants a player showing up for their FanFest as a trade is ready to go down. We can tell you from our sources that Lucas Giolito was also scheduled to be at the Nats Winterfest and if the Eaton trade wasn’t finalized earlier in the week, he might not have come also. That is the business of baseball. That is the danger of having a FanFest in mid-December as rosters are far from complete.

The Post wrote this: “Nationals infielder Danny Espinosa, unhappy after the team acquired Adam Eaton on Wednesday, decided to skip the club’s annual Winterfest at the Walter E. Washington Convention Center this weekend. According to a person familiar with the situation, Espinosa believes the trade for Eaton will likely cost him his job as the club’s starting shortstop.”

The Espinosa trade was first reported by Josh Norris of Baseball America and this trade was in the works prior to Saturday, and the physicals were completed on all players to make the trade official on Saturday. Earlier on Saturday, Nats media member Phil Wood was saying according to his sources Espinosa could be traded to Tampa Bay in a deal for Alex Colome citing Espinosa’s close relationship with Evan Longoria.

The Nationals received in trade from the Angels Minor League right-handed pitchers Austin Adams and Kyle McGowin. In the MLB Pipeline ratings of prospects, neither player even cracked the Top 30 list which can be viewed on this link. Their stats are checkered as Adams is a 25-year-old reliever with a 3.05 ERA with 61 strikeouts but  24 walks in 41.1 innings at the Angels Double-A this season, and McGowin is a 25-year-old starting pitcher with a 5.83 combined ERA between Double-A and Triple-A. Austin Adams takes a coveted 40-man spot, and it would come as no surprise if he is a roster casualty in the future if the Nats need a roster spot.

The writing was seemingly on the wall for Danny Espinosa when Dusty Baker before the presumed start of the Game 2 prior to being ruled a rain-out in this year’s NLDS was asked why he keeps starting Danny Espinosa, and Baker seemed to be caught by surprise and gave a no-confidence vote to Espinosa as Jesse Spector of the Sporting News wrote, “In addition to giving his own player the most ringing vote of non-confidence maybe ever, Baker posed a question for which there are multiple viable answers.” Here was Dusty’s response:

“Well, who else do I have?” Nats’ Manager Dusty Baker said before the scheduled Game 2 of the NLDS. “That’s my answer. I mean, you can give me somebody better, then I can play somebody instead of him. You know, certain times, you have certain people on your team, and that’s what you’ve got.”

In 157 games in 2016, Espinosa hit a career-high 24 home runs which was the stat he often seemed most proud of, but he batted only .209/.306/.378/.684 while finishing second in the National League in strikeouts with 174. Despite a career-high 1.6 dWAR in his first full season at shortstop, Espinosa led the NL in shortstop errors with 18. Espinosa lacked range to his glove-side, but his value was in doubleplays turned that led the league. In split seconds that tick, Espinosa’s arm was a key many times on the back-end of doubleplays. Let’s give credit where credit is due, Espinosa did have some positives, but most times when you dig in the numbers he benefited on his statline from intentional walks (12) because he generally hit in front of the pitcher and HBPs (20) as he was adept at turning into pitches. They all count, but how many IBBs do you get if you aren’t batting 8th and your batting average is just .209? That .306 OBP easily could have been 15 to 20 points lower, and there were also several walks that involved pitch arounds that do not get scored as IBBs.

Espinosa had been with the Nationals’ organization since they drafted him in the 3rd round in 2008 MLB Draft out of Long Beach State. His tenure almost made it into a 9th calendar year. It was suggested by ESPN just before the non-tender deadline earlier this month that Espinosa could be non-tendered. By trading Espinosa, the Nats lowered their projected payroll by approximately $6 million, but also directed Espinosa to an AL team. Unfortunately, the Nationals got little in return except two warm bodies it would seem unless the Nats MiLB staff can work wonders on Adams and McGowin.

The rumors of Espinosa returning quality prospects was just wishful thinking. You know Rizzo tried for more. The timing of this trade was more coincidence than anything else. The Angels had a need for a 2nd baseman and were considering Stephen Drew for a while. Now they won’t need Stephen Drew who could be headed back to the Nationals.

There were other rumors swirling yesterday about other no-shows at the Winterfest like Gio Gonzalez and Clint Robinson. We have no updates about either player, but as we reported days ago, Anthony Rendon, Bryce Harper, and Jayson Werth all had excused absences as Bryce Harper is getting married next week, and yes, he attended a Duke basketball game. Photos from that game were circulated, and no, Bryce did not travel to North Carolina for the game as it was played minutes from his home at the University of Las Vegas.