Dollars and Sense: The Dodgers financial issues, the CBA, the Nats and MASN, and BAMTech

It seems hard to believe that the Dodgers could have any financial issues given their record television contract they signed three years ago worth $8.35 billion over 25 years which has an aggressive acceleration annual clause and reportedly paid-out over $204 million in 2016 (roughly 500% of what the Nationals receive). In addition, the Dodgers ticket revenue is the highest in the Major Leagues over the past four seasons.

On the expense side of the ledger, Spotrac calculated the Dodgers 2016 payroll at over $279 million which was subject to the MLB luxury tax. The Dodgers 2015 payroll, according to Spotrac, was almost $306 million showing they had already reduced payroll.

The debt to income rule is designed to ensure that MLB teams have the ability to meet their financial obligations on debt owed, and according to Shaikin “[it] generally limits debt to no more than 12 times annual revenue, minus expenses. The Dodgers were not profitable in any of the first three full seasons under new ownership, co-owner Todd Boehly said last year. Their debt is believed to be in the hundreds of millions.”

Debt incurs additional expenses as anyone with a mortgage is aware of. Interest expenses are due on the debt, and if Shaikin is correct that their debt is in the hundreds of millions then consider $500 million at a 4% interest rate would be $20 million annually.

Take payroll expenses, debt service expenses, and general operating expenses, and you can see that it is possible to run the team at a loss as that quote from co-owner Todd Boehly claims.

“I think the Dodgers will be in a position that they can comply with our expectations in terms of the debt service rule, without any dramatic alteration in the kind of product they have been putting on the field,” MLB Commision Rob Manfred said.

The Dodgers are expected to reduce payroll for a second consecutive season, with the goal of cutting from about $300 million in 2015 to closer to $200 million in 2018 according to MLBTR.com. The reduction in payroll will happen organically through expiring contracts, but it could affect the Dodgers from jumping into the free agent market for some of the big name players including their own free agents like Kenley Jansen and Justin Turner.

“We understand all of our obligations and work closely with [MLB],” Dodgers’ CFO Tucker Kain said.“We’ll be in great shape with [MLB rules].”

The current Collective Bargaining Agreement (CBA) expires on Thursday December 1st, and there have been mentions of a lock-out if an agreement is not reached by Thursday as expressed by MLB commissioner Rob Manfred. There has been labor peace for over 20 years in baseball.

The sides are hammering out issues with significant negotiating points on protected free agents with regards to draft forfeiture, an international amateur draft, size of rosters that could increase the active roster to 26 players, and the luxury tax.

If this tweet below by Jeff Passan is any indication along with subsequent tweets, many Latin American members of the union are vehemently opposed to having an international draft.

Sources: A significant number of Latin American players are expected at MLB/MLBPA bargaining session today to fight the international draft.

Many teams are waiting to make off-season moves in a ‘wait and see’ mode as to strategize on what is agreed to in the CBA as that could affect negotiations.

The Dodgers situation is just further proof that MLB teams must be prudent with their finances, and the Washington Nationals don’t have a Dodgers size TV contract with regards to potential cashflow.

“I think we would probably have to make some maneuvers to get us in a payroll position where it’s more feasible for us,” Mike Rizzo told the Washington Post at the GM Meetings. “But we’ve always been given the resources here by ownership to field the best team we can put on the field.”

“[The MASN money] affects us,” Rizzo continued. “… it’s something we’ve had to manage now for four off-seasons. It’s something that needs to get rectified quickly.”

The MASN 2012-2016 five-year reset period has passed with no resolution. In a perfect world, the Nationals should be negotiating their 2017-2021 five-year period for annual TV rights with MASN, but are unable to do that with the prior five-year period in litigation.

The cashflow from MASN and the effect on payroll is evident as the Nationals make crucial personnel decisions.

In addition, the Nationals are looking at other avenues for raising revenue including selling stadium naming rights, exterior stadium digital signage, and increasing ticket revenue.

The Washington, D.C. metro population is the 6th largest in the United States, and the Nationals got paid the 16th largest annual rights fee for the 2016 season according to FanGraphs which is in the bottom half of baseball’s 30 teams. This is a large disparity as the DC population is larger than Philadelphia where the Phillies get over $60 million per year as part of their $2.5 billion 25 year deal which will escalate to over $100 million per year.

The Nationals could drop to the 18th worst TV deal in baseball in 2018 as the Cardinals get their new TV deal and the Cincinnati Reds signed a new deal in October which was a year ahead of the expiration of their deal with Fox. The Padres TV deal they signed in 2012 has some larger escalations that are ready to increase. 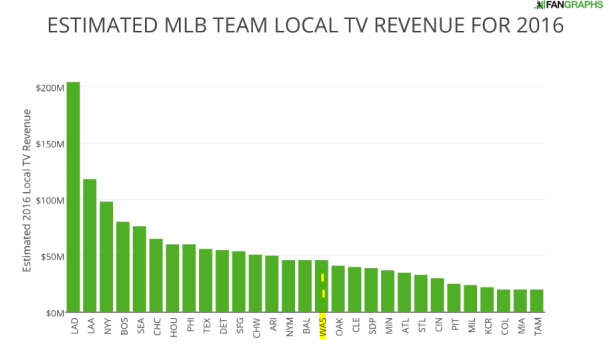 According to StationIndex.com, the St. Louis Cardinals, who play in the 21st-ranked U.S. television market, have a new TV deal with Fox Sports Midwest beginning in 2018 that will pay them more than $1 billion over 15 years. The San Diego Padres, who play in the 28th-ranked U.S. TV market, signed a deal in 2012 with Fox Sports San Diego worth $1 billion over 20 years. The Reds play in the 34th-ranked television market which is ahead of only Milwaukee for all MLB teams.

If you’re wondering, Baltimore is the 26th largest TV market in the U.S. and the MASN contract calls for the Orioles to get the same annual rights fees as the Nationals regardless of their enormous population and demographic wealth disparities that are so important to broadcasting and cable fees.

The Nationals are clearly trending downward in TV rights fees falling below revenues generated by some small market teams now in terms of TV revenue, and this is moving in the wrong direction.

When Walt Disney the parent company of ESPN bought 33% of MLB Advanced Media’s spin-off media company, BAMTech, there was a reported payment in August and a second installment payment equaling the remainder of the $1 billion purchase price is due in January 2017, and will give all teams a nice windfall of cashflow prior to the start of spring training.

“Every day the powerful partnership of technology and content becomes more important to consumers,” MLB commissioner Rob Manfred said. “We are excited to get to work with Disney and our longtime partners at ESPN in the important and ever-changing area of content distribution.”

Bottom line, the Nationals should not rely on the MASN cashflow any time soon, and will need to continue to get creative to make the dollars and sense work.

This entry was posted in Analysis, MASN, MikeRizzo. Bookmark the permalink.
← Previous Article | Next Article →