aka What should we expect from Lucas Giolito and Reynaldo Lopez?

aka Should the Nats trade those guys for Chris Sale or Chris Archer?

I admit I am a prospect snob.  I read Luke Erickson’s NationalsProspects.com site every day and get irrationally excited when a guy like Max Schrock gets 5 hits or when Rafael Bautista has 3 stolen bases in a game.  The level of excitement I’ve had over the last year for “Future Aces” Giolito and Lopez perhaps goes beyond irrational.

So, when the headlines pop up that the Nats are going after Chris Sale (career WAR 31.1) and Chris Archer (career WAR 10.8), my first thought is “Rizzo had better not trade Giolito or Lopez because they’ll be better than both of those dudes” and my second thought is “Rizzo had better not trade Giolito AND Lopez for one of those dudes.”  And then I read other posters like Tom H kicking dirt on my intuition and my third thought is “Maybe I should do some research on what type of career we can expect a Top 25 pitching prospect like Giolito and Lopez to have?” 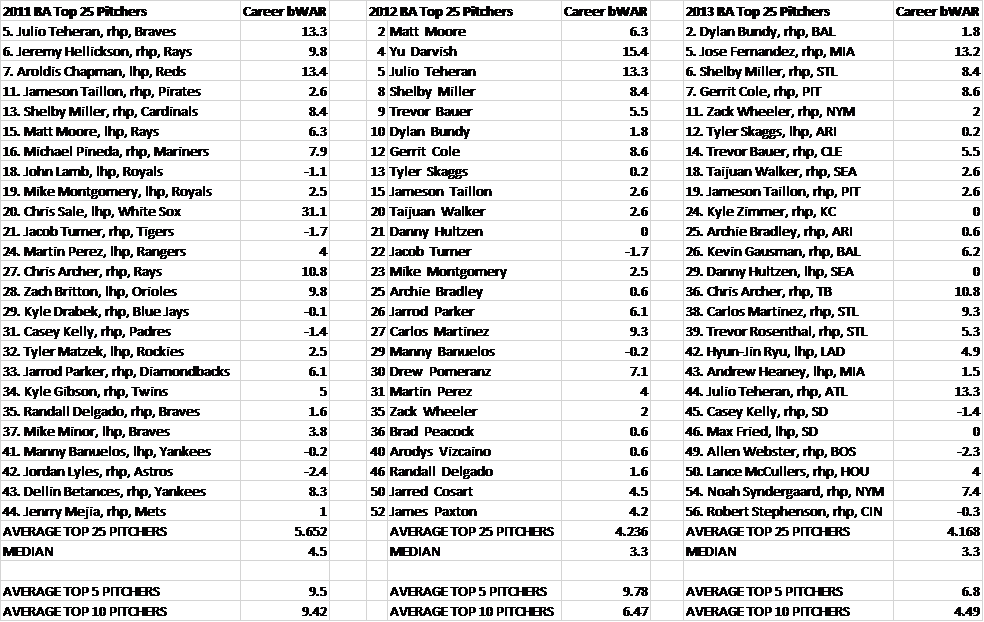 I then eliminated the duplicates between the lists and there were 52 guys who appeared on at least one of the three lists.  Here is the breakdown by Career WAR: 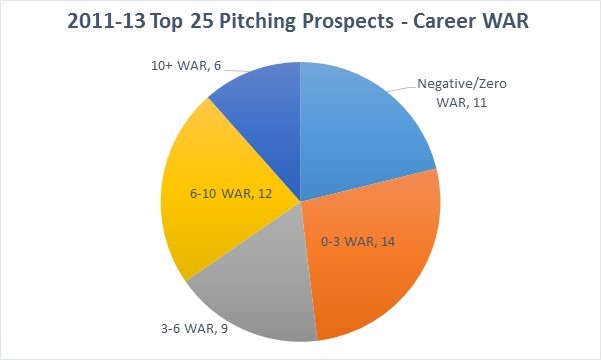 The average of those 52 pitchers’ Career WAR is 4.75 and the Median is 3.9, so theoretically that is what can realistically be expected from a player like Reynaldo Lopez.  Just over 10% of the list has Career WAR greater than 10, which is sad because just over 20% of the list had negative WAR or no MLB experience. 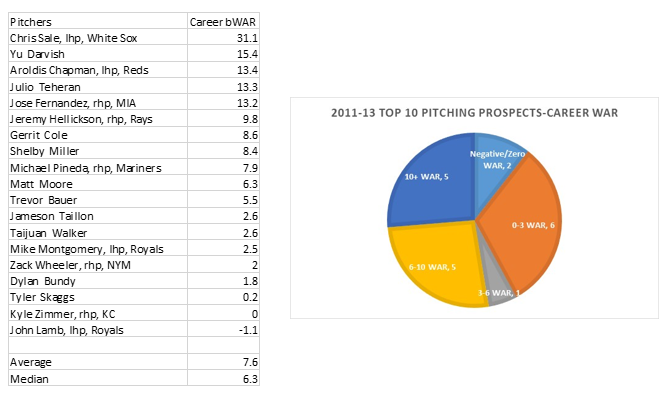 Hopefully, Giolito becomes Chris Sale or even Yu Darvish, Aroldis Chapman, Julio Teheran, or Jose Fernandez.  And hopefully he doesn’t become Zack Wheeler, Dylan Bundy, Tyler Skaggs, Kyle Zimmer, or John Lamb even though some of them could be late-bloomers.  Remember, that Bundy was the #1 Pitching Prospect in 2013.

If we assume that on average Giolito should be worth about 7.6 WAR over the next 3-5 years and Lopez should be worth about 4.75 WAR, it’s rational to expect that the Rizzo Effect will help those guys beat the odds?  Or is it more appropriate to pay nearly $40MM to pick up a proven arm in his prime and who is likely to get 12-15 WAR by himself?

So, if the White Sox or Rays ask for Giolito and Lopez for their top arm, what do you do?

What say you #Nats fans? pic.twitter.com/QSsgipNAUM

As usual, all of the spreadsheets for this article are at https://drive.google.com/file/d/0Bx3rIcR7Tac2cDV2LVdVQTc3SUk/view?usp=sharing.  Please let me know if I screwed anything up.