The Free Agent market is heating up and we’re debating here at TalkNats about signing Fowler or Cespedes or perhaps going “cheap” with a guy like Jon Jay or Carlos Gomez.  Free Agency started forty years ago in 1976, and player contracts have skyrocketed year after year ever since then.  I thought it would be interesting to assign grades to free agent contracts from recent years to try to gain insight on whether the risk of a long-term, high-money contract is an acceptable risk. 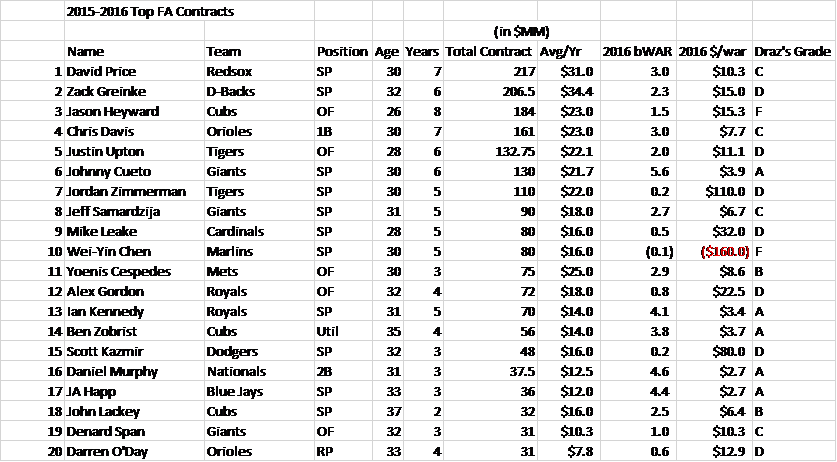 In the “other notable” category of signings, the 21st highest contract, Marco Estrada was a very good performer, who I rated an A with a $3.8MM/WAR for 2016 and who performed well in the playoffs.  Then there were a bunch of $6-8MM/yr contracts given to relievers not named Andrew Miller and I wonder how excited those teams are about those deals now (“meh-dle relievers”).

I assigned 3As, 4Bs, 5Cs, 3Ds, and 5Fs.  The top 2 big money contracts were very good for the two big arms (Scherzer and Lester) and I bumped Lester up to an A for breaking the curse of the Billy Goat.  The bottom of the Top 20 stunk up the joint with 2 DH types and an over the hill pitcher.  Add in the other two Fs – Big Panda and Oft-Injured McCarthy, and maybe having some athleticism matters???

Again, we find the non-athletic guys getting $8 and $11.5MM (13 combined career SBs between the two) and being awful.   Also, we see a variety of meh-dle relievers getting $5-9MM each and none ended up being very good for the last 2 years – who would have guessed that Nats-castoff Duke would be the star of the bunch?

I assigned no As, 6Bs, 5Cs, 3Ds, and 7Fs.  The top 2 big money contracts were again very good (Cano and Tanaka), but the next 3 were pretty awful (Ellsbury, Choo, and McCann).  Overall, it was a really bad class of FAs, especially when you consider that the best guys besides the Top 2 were Granderson, Ruiz, Hughes, and Kazmir – not exactly an all-star team roster.  Most of the FA signings were meh to bad.

Here, the meh-dle reliever success rate was about 50/50, with the younger guys tending to perform much better than the old guys.

So, that prompted me to look deeper at Age vs Performance for the 61 players who represented the Top 20 FAs for all 3 years.  Alas, there was no correlation: 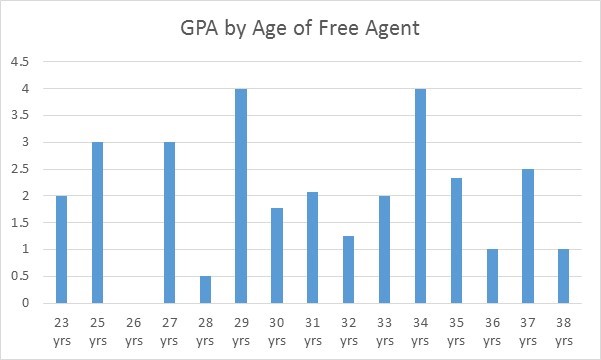 How about by length of contract term? 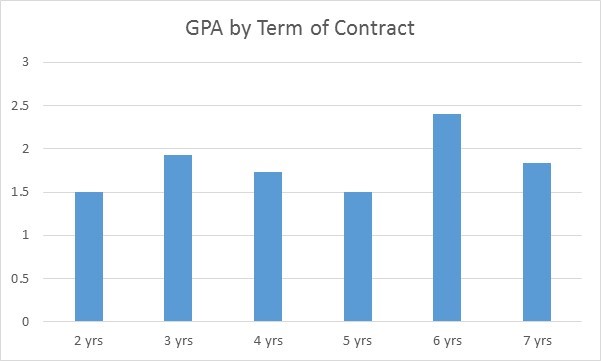 How about by position? 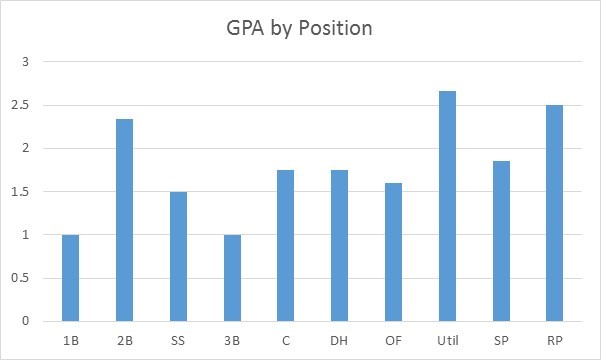 And, finally we see some correlation by looking at GPA by Team: 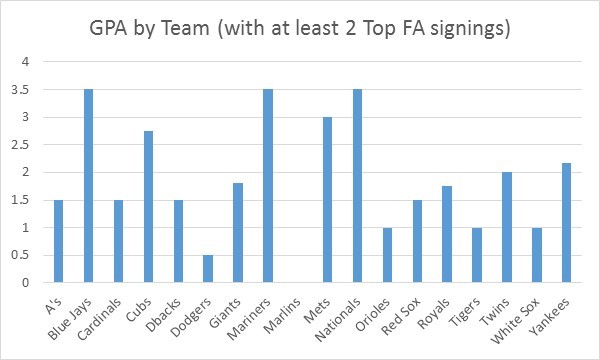 In summary, signing a Top 20 FA is a big risk, and one that is probably going to give you no better than a C-level return.  It doesn’t matter if the FA is young or old, or plays a certain position – it’s basically a crapshoot for most GMs.  But since most GMs think that they are Mike Rizzo and can score a 3.5 GPA on their picks, they’ll probably keep taking those risks.  Fortunately, we have the real Rizzo on our team, so IRWT.

Does anyone see any takeaways that would make you feel more comfortable about the Nats shelling out $60-80MM to a Top 10-15 free agent, because these numbers make me want to stay away.  Note: my source analysis is available at https://drive.google.com/file/d/0Bx3rIcR7Tac2TG9WSnpKRlV3UGs/view?usp=sharing – happy to accept any corrections or different approaches.

This entry was posted in FreeAgents. Bookmark the permalink.
← Previous Article | Next Article →