At one time this game was tied by a Werth single in the bottom of the 9th: Postgame

The game started with a nice pitcher’s dual by the starters who both left the game giving up 3 runs each. A.J. Cole had 2 outs with 2 runners on and was asked to issue an intentional walks. Unfortunately, Cole threw a wild pitch which scored a run making the score 2-0 and a single made it 3-0. The Nationals clawed back into the game and scored 3 runs in the bottom of the 4th inning to tie the game.

The Rockies scored a run in the 7th inning off of  Marc Rzepczynski, and the score stayed tied until the bottom of the 9th inning as Ben Revere walked and stole 2nd base. Jayson Werth in a 2 strike count served a single into leftfield to tie the game. It was a blown save for Adam Ottavino who had been on a long 0.00 ERA streak.

In extra inning Mark Melancon threw a scoreless 10th inning and in the bottom of the 10th inning Bryce Harper got ejected from the game after a borderline strikeout call as he tossed his helmet in front of home plate umpire Mike Winters. It was unfortunate as the Nationals had the momentum going and only one bench player remaining.

In the top of the 11th inning, the first batter hit a grounder that Anthony Rendon made a great diving stop on but he threw the ball wide for a two-base error. The Rockies took advantage in quick-strike fashion as Charlie Blackmon hit a two-run home run off of Yusmeiro Petit. The Rockies would add on three more runs in the inning including another two-run home run by Carlos Gonzalez.

Here is the chart on the Harper 10th inning strikeout: 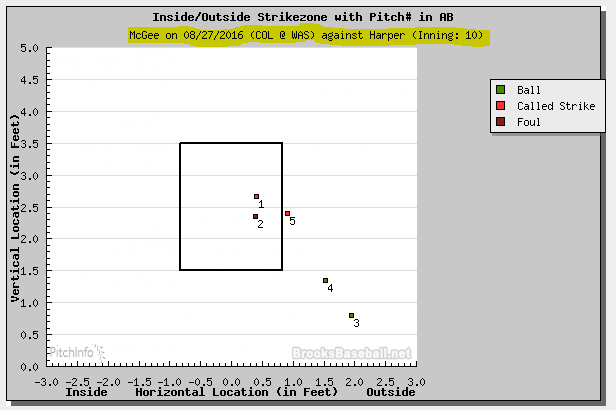