The Nationals have to create a roster spot for Reynaldo Lopez today, and that spot could very well come from a release or DL of Papelbon. Crasnick believes it’s an unconditional release. 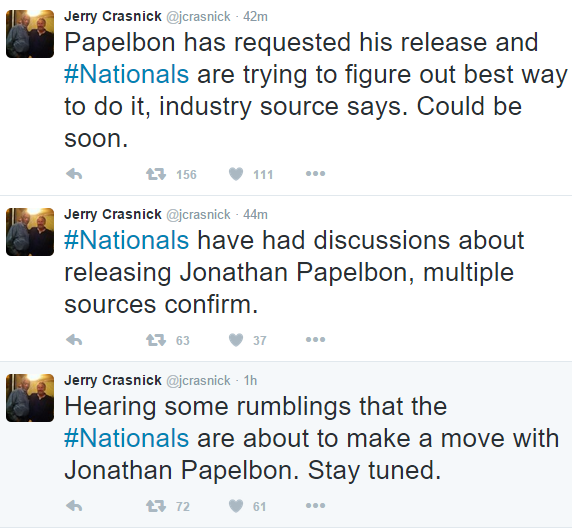 First off, the Nationals defense on the right side of the infield was spectacular on some very tough plays last night that were made to look easy.

Trea Turner and Daniel Murphy covered a lot of ground in last night’s game, and on offense they also came up big.

Trea Turner had 3 hits, 2 stolen bases, and did exactly what you need out of a lead-off man as he raised his batting average to .301 last night and an .819 OPS. Turner is now 10-11 in steals. Daniel Murphy had another multi-hit game which was his 45th game where he has delivered at least 2 hits in a game. Murphy raised his OPS back to .999 last night.

On Trea Turner, his intangibles are off the charts, literally! Check out this chart were we turn his 10 steals into an extra base for the Total Bases stat and remove the one caught stealing from his on-base-percentage as if he was never on-base. Then we make one further adjustment for the three times Trea has caused the opposing team to commit a throwing error which is as good as a hit! All of a sudden he starts to look like a 4.5 WAR player because of his great defense.

Jayson Werth extended his on-base streak last night to 41 consecutive games with a booming double off the out-of-town scoreboard in rightfield where Werth was within a few feet of a two-run home run. He was the man behind the walk-off against the Cubs way back on June 15th that really put a jolt of energy into the season, and while the streak officially started 7 games after that, the real magic happened 10 days before that on a flight from Cincinnati to Chicago and back to his Illinois roots.

The change or transformation for Werth started on June 5th after the team left Cincinnati where Werth was swinging for the fences and his BA dropped to .220 and his OBP was at a pathetic .272 and his OPS was .686. The team flew to Chicago to play the White Sox and Jayson got to DH, and it transformed his season. He went back to his old approach in his hometown state where he grew up. Werth went 2-4 plus a walk on that day. If Werth didn’t have that 0-fer on June 19th in San Diego, his on-base streak would be at 52 games! He has been en fuego during this 52 game stretch.

“Everybody that’s anybody always told me, ‘You need to be more aggressive, you need to swing at the first pitch, you need to do this, you need to do that.’ That’s just not really been my game,” Werth said at his locker.”But for whatever reason, I thought this was the year I was going to do that. And I think I’ve silenced all those people that have told me over the years that that’s the way I should hit.”

“Just getting back to being myself, I think that’s what it comes down to,” Werth said. “I’ve been a pretty good player over the course of my career, and I think it was a product of having good at-bats. It is what it is, whether it’s a streak or it’s not a streak, I feel like myself up there. I’m the same player I’ve been since I got to the league.”

When Werth yelled on June 15th to the doubters, “Those people can kiss my ass!” it was really a release to the old Jayson Werth that he rediscovered in Illinois on June 7th. Fans were just starting to realize it a week later after his walk-off double.

In WAR for 3rd basemen, Rendon now ranks 11th in the Majors. If you want the hottest 3rd basemen since the All Star break, Rendon is ranked second with a 1.009 OPS.

The Bryce Harper drama hit a new high yesterday after a ‘sourced’ piece was written by Tom Verducci for Sports Illustrated (read it here) to which Verducci wrote some scathing claims from a source:

“What’s wrong with Bryce Harper? One of the more frequently asked and vexing questions of this season may have its answer in a previously undisclosed injury. The Washington Nationals rightfielder and 2015 National League MVP has been playing through a right shoulder injury for the past two months, according to a source close to the team.

The injury affects the area at the top and back of his shoulder and at the base of his neck. Harper has been receiving treatment for the injury, the source said, including cupping therapy and Active Release Technique. Harper is hitting .233 with 20 home runs and 57 RBIs. Last year he hit .330 with 42 homers and 99 RBIs.

The injury has been particularly problematic for Harper when it comes to pulling his bottom hand through his swing, the key to creating loft and power.”

Yes, we all know Bryce was pulled from the game exactly one week ago with a stiff neck. A photo showed a patch on the right side of his neck, barely visible above the collar. 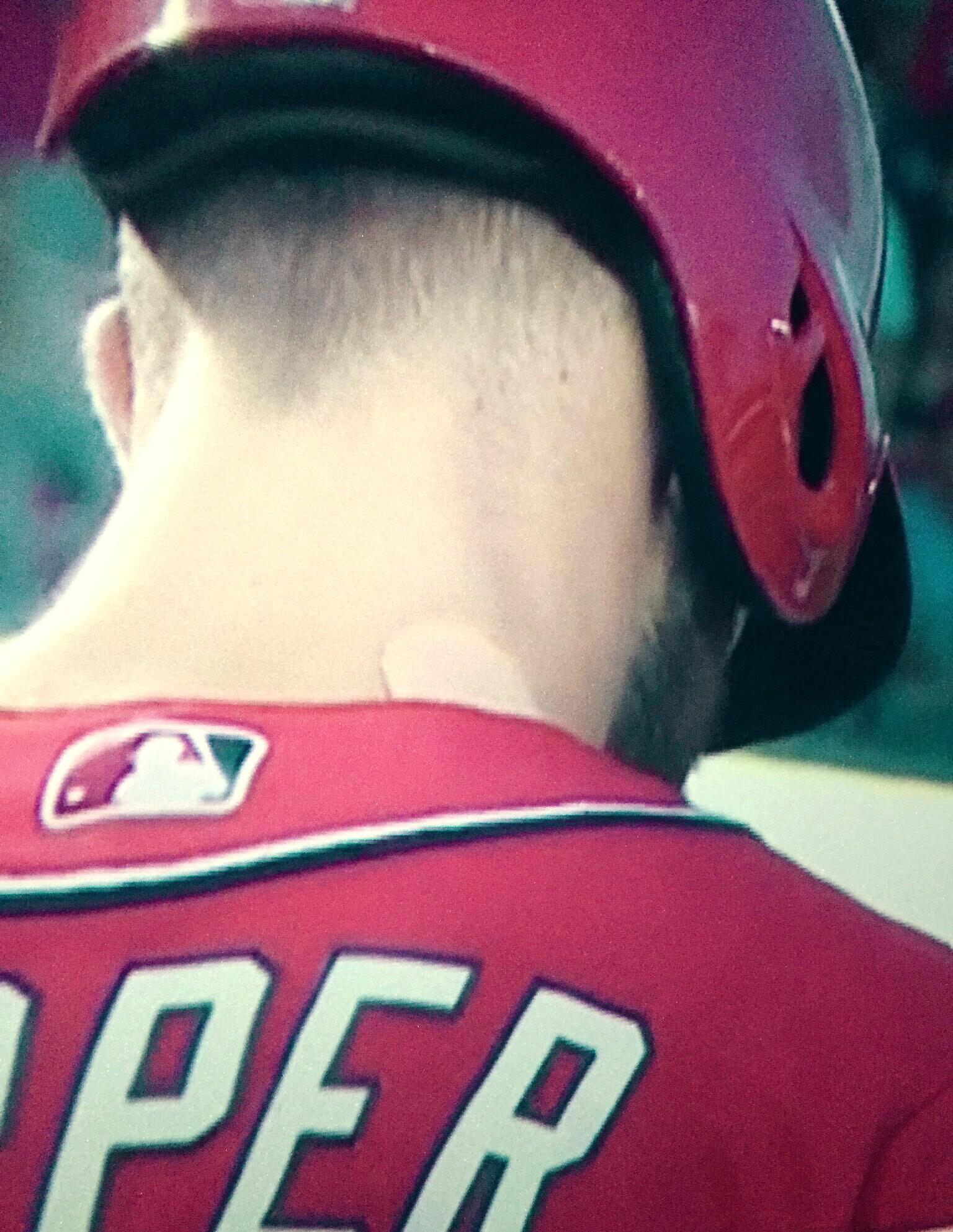 Subsequent to the Verducci story and before Rizzo refuted the Verducci piece, Chelsea Janes must have worked quick to throw in her 2 cents as her sources she claims were saying much of what Verducci wrote. Do we believe this or was she just piling on in a way “like I knew it all along” or is there any credibility to this story?

So is Janes now going up against what Rizzo said?

“The report is inaccurate,” Rizzo said. “Tom Verducci is wrong. I just asked Bryce Harper and the training staff and our medical staff. He hasn’t had a right shoulder injury. He’s got a stiff neck. He’s day-to-day. I have a low level of concern. If it was a DL-warranted injury, he’d be on the DL.”

Rizzo did confirm parts of the SI article on the portion in the piecr that Harper has been receiving treatment for Active Release Technique and cupping.

Chelsea Janes has a habit of jumping on a major sourced story broken by others as she just did it again after Jerry Crasnick reported the Papelbon news, Janes tweeted out her own version then a tweet or so later:

Also, @jcrasnick mentioned this possibility this morning as well.

Really Chelsea, really? Crasnick had this before anyone.

We have mentioned many times before about Stephen Strasburg’s tremendous statistical cavernous divide between his home/road splits this season. That cavern got deeper yesterday to a point where maybe it’s the mound as F.P. Santangelo pointed to or the extreme humidity that DC experiences during the summer. The statistics can move to an extreme with a few bad starts, and in fairness in Strasburg’s career he is slightly better at home than on the road.

Strasburg has a 4.01 home ERA this year and an MLB best 1.70 ERA on the road. You can decide if this is just a statistical anomaly or whether it needs a further looking into.

Ryan Zimmerman’s MRI was seen by a wrist specialist (finally) and there is no break we have been told by our source. Zimmerman was cleared to resume full baseball activities which he has not done yet because he still feels pain in the wrist.

“Now that Zim is out, [Trea] is playing mostly 2nd and Murph is playing 1st. It’s been a challenge. It all depends if Murph is playing 1st base or not. If Zim is not right or is not here, then I will play Trea at 2nd. If Zim is okay and Murphy is at 2nd, then I will play Trea in centerfield. He has played a heck of a 2nd base, but he has played a heck of a centerfield too. I am glad that we have a luxury to play him at both and feel comfortable.”

Define for me ‘okay’ and ‘not right’.

We have no clue what Dusty Baker is thinking about Ryan Zimmerman, but his discussion about him on Thursday was as neutral as we have heard Dusty all season. Dusty had been a defender of Zimmerman at every turn almost guaranteeing Zim would return to form with the warm weather. Well the regular season is 71% completed, and the weather is scorching hot they say. This time Dusty chose to defend Revere as a .300 hitter with the saying that ‘water finds it’s level’ which is a frequent phraseology used by Rizzo to say a player will rise back to his career numbers if healthy.

This entry was posted in Analysis, NewsAndNotes. Bookmark the permalink.
← Previous Article | Next Article →