A week from today, Lucas Giolito will no longer be a 21-year-old as he celebrates a new birthday during the All-Star break. Bartolo Colon turned 43-years-old about six weeks ago. As Lucas Giolito‘s mother Linsday was in labor to give birth to Lucas, it was the same day Bartolo Colon made his pro debut for the Burlington Indians in rookie ball, and Lucas Giolito was born the very next day on July 14, 1994. From labor pains to elbow pains, both Giolito and Colon have those elbow scars on their right arms to show their commonalities in the brethren of pitchers.

Colon and Giolito also share the bond as starting pitchers for teams in the NL East, and Colon once pitched for the same franchise when the Washington Nationals were the Montreal Expos. The two pitchers are also very different physically. Giolito is a power pitcher and Colon is a finesse pitcher. One stands tall at 6’6″ with an athletic build and the other’s physique is the opposite at 5’11” and a rather rotund 285 pounds. Both pitchers, however, can be effective in their own way which is what makes the game of baseball unique. 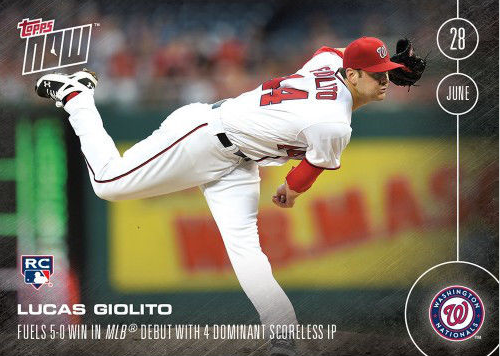 Bartolo Colon is a few years older than Giolito’s former manager from his Harrisburg Senators team, Matt LeCroy, which makes this a generationally intriguing time warp. A little more than 21 years of age separating 2 starting pitchers facing each other in the same game might appear to be a new record, but a search shows it is not. Jordan Zimmermann faced Randy Johnson in 2009 where they were separated by over 22 years.

Colon was signed in 1993 by the Cleveland Indians as an international Free Agent before Giolito was ever born. Colon was born and raised in the Dominican Republic, and just like Giolito worked his way up through the minors. Both have been through elbow injuries and surgery although the details of Colon’s surgery and PED assertions were murky. Colon has been shown to be a survivor in a young man’s game with big arms, basketball height, and low body fat

“It’s pretty interesting. Baseball is such a cool sport in that way,” Giolito said. “I’m basically half [Bartolo Colon’s] age and I’ll be pitching against him. It’s awesome. It’s an honor too. He’s had a great career.”

As Giolito’s MLB career is just really beginning, Bartolo Colon’s is nearing the final chapter, and Colon has little to prove tonight as he is a veteran with an extensive track record while Lucas Giolito has much to prove if he wants to remain a Major Leaguer as a 22-year-old. Baseball has limits, and the Nats will have decisions to make on July 15th and beyond as to who stays in the starting rotation when Joe Ross returns from the DL.

Lucas Giolito wants to live in the here-and-now, and the Mets in New York is his only focus. Giolito has had well over a week and 2 bullpen sessions with Mike Maddux to prepare for this after it looked to some that Giolito was going back to the Minors when Stephen Strasburg was activated on Sunday. Mike Maddux has made very few tweaks and suggestions to what Lucas brought to the Nats as a near-finished product that was honed by his Double-A Harrisburg Senators pitching coach Chris Michalak and Nationals’ minor league pitching coordinator Paul Menhart. They kept his left leg more in line coming through his delivery to keep him from opening up while keeping those mechanics repeatable.

Lucas Giolito has strong New York roots from his father’s side of the family and should have some fans cheering for him tonight, but he is already prepared for the hecklers that occupy the areas near the bullpen where he will warm-up pre-game and near the Nats dugout.

“I know that they have a pretty cool atmosphere over there,” Giolito said. “It will be my first time on a road [game] in a major league stadium. I know that there’s some heckling and stuff like that going on, which is fine. I think it’s all fun. It’s all part of the game. I’m excited for it.”

Weather was a factor in Giolito’s first start, and Mother Nature could be an issue again in this start according to Weather.com which is showing an almost 5 hours window of scattered thunderstorms increasing in likelihood to 50% by 9pm.

This entry was posted in Analysis, Giolito. Bookmark the permalink.
← Previous Article | Next Article →