The Fourth 18-gamer — Steady as she goes.

The Nats finished the first third of the season with a record of 33-21, and a three game lead over the New York Mets. They continued to play solid baseball in the most recent 18 game set, finishing 10-8. Even after losing the first two games of the Dodgers series, they stood at 43-29, 14 games over .500 and 4.5 games ahead of the Mets.

Here’s how the fourth 18-game set went down, game by game. First our batting and then our pitching.

Worth noting, the Nats won 10 games in the set, and in nine of them they scored five or more runs.

Note here that the Nats played 70 games this year before they used a starter other than Max, Stras, Gio, Ross or Roark.  Petit filled in admirably for Stras, just as we hoped, though the Nats couldn’t do much against Clayton Kershaw.

But we’re getting ahead of ourselves here.

The set started off with a tough 3 game series in Cincinnati. After losing the first two games, the Nats trailed 5-0 after three innings on Sunday afternoon. In the first of several roller coaster games during this set, the Nats scored 5 in the 3rd, 3 in the 4th, and 2 in the 5th, only to nearly squander their lead in the late innings. But they held on to win the game 10-9.

The big hits continued in the first two games of a series against the White Sox. Racking up 21 runs and 30 hits, the Nats took the series, even though the Gonzalez (Gio) v. Gonzalez (Miguel) pitching duel the next day didn’t go the Nats’ way.

Then it was back to DC to face the Phillies, and the fun really started. As in the White Sox series, they won the first two games in convincing fashion. The first one featured three HRs, by Ramos, Drew, and Espi, and, perhaps more amazingly, the second “triple promo” outcome in a week – scoring 9 runs along with a Pap save meant McDonalds, Papa Johns, and Chick-fil-A treated Nats fans to special deals the day after. My friend Mark and his kids enjoyed a heart attack waiting to happen, which they dubbed the Nat-wich: 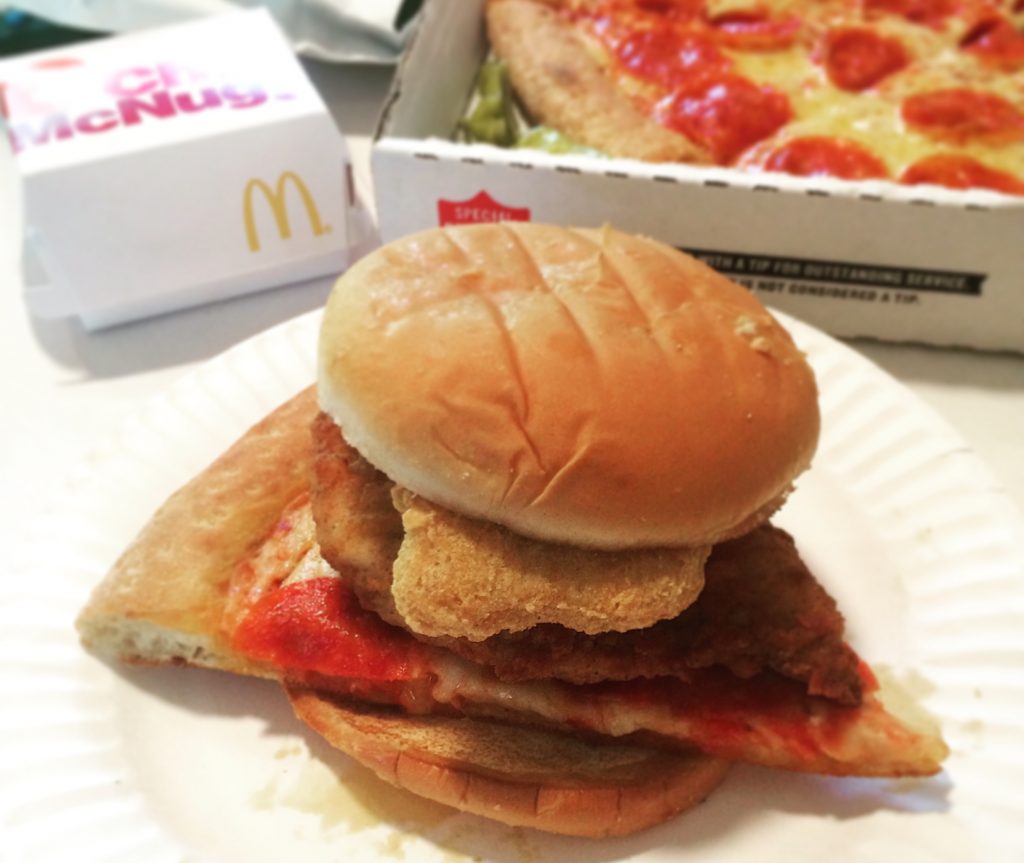 So that game was fun, but the third game of the series was an instant classic with Pap giving up a go ahead bomb in the 9th, only to vulture a win when Werth walked off his old team.

Werth then gave his second best postgame interview of the set, and the “DC Strangler” was born:

Is it just a coincidence that Pap ended up on the DL just a few days later?

Werth has hit walkoffs before, of course. But his last one was nearly four years ago:

Yeah, that never gets old.

The Nats then faced the Cubs, and while they weren’t able to completely return the favor of the four game sweep in Chicago, they took two of three to win the series in convincing fashion. Scherzer threw a gem in the Monday night game, then the Solis lost a hearbreaker on Tuesday after the Nats came back to tie the game going into the 9th inning. Finally, in a 4:05 pm sellout that didn’t end until about 8:25 pm, the Nats pulled out a crazy 12-inning win that featured several amazing comebacks.  Jayson Werth had the key blow once again. The MLB narrator guy is going to lose his voice if JW keeps doing this.

And MASN might lose its FCC license if JW keeps doing this:

Then the Nats headed West, first stopping in San Diego where they won the first two games of a 4-game set with the Padres. That put them 18 games over .500 and in a position to really open up some distance between themselves and the disappointing but still dangerous Mets who slid to 6 games behind the Nats at the midpoint of the Padres series.

But then things seemed to fall apart, and the set ended with a four game losing streak – 2 to the Padres and the first two games of a big series in LA against the Dodgers. There just doesn’t seem to be any getting around the fact that West Coast trips are brutal. And it doesn’t help when your best pitcher has to miss his start.

Fortunately, we’re not headed to San Francisco for more West Coast punishment, but instead just stop in Milwaukee for a weekend series on the way back to DC.

One thing that can be said about this set is that the bats came alive. We averaged 5.3 runs and 9.3 hits per game, and had 27 HRs, one and a half per game. Our team OPS was .784, the highest by far of any 18-game set this season. Here’s the total batting line for the set:

As for our friends Bryce and Murph, these last 18 games were a bit of mixed bag. Harper hasn’t regained his early season dominance, but he actually was quite a bit better in this set than in the last.

As for Murph, we all knew he wasn’t going to hit .400 for the season, and this set made that patently clear. This set was by far the worst for him this season, but an .821 OPS when youre BABIP is only .240 is nothing to sneeze at.

He may have lost his .400 average, but he hasn’t lost his sense of humor.

When you forget how many outs there are… #IBackTheNats pic.twitter.com/Qi7RVwYVwT

So after their hot start, the Nats have been the model of consistency when viewed through the 18-game lens. In the first four sets of the season, they’ve gone 14-4, 9-9, 10-8, and 10-8. Keep up a 10-8 pace for the rest of the season and they’ll win 93 games. That’s certainly enough for Wild Card berth, and could very well be enough to win the division. Despite sitting on a 4-game losing streak as the 18 game set concluded, they’re in position to have a very good season. By the time the next 18 game set is completed, the season will be more than half over.  I think it’s fair to say that while the team isn’t perfect, it is for real.

Finally, couldn’t figure out where to put it, but how cool is this?  Farewell to Vin, and a tip of the cap.