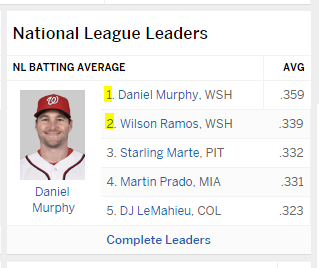 As far as the catcher leaderboard goes for the entire Major Leagues, Ramos leads in every slashline stat BA/OBP/SLG/OPS and is 1st in RBIs and tied for 1st with 11 Home Runs.

As far as who will be the starting catcher for the National League next month in San Diego for the All-Star game is anyone’s guess and probably will be either Yadier Molina or Buster Posey based on the latest voting results. Wilson Ramos has at least moved into 3rd place on the latest ballot update.

Winning is where Wilson Ramos excels and the team is 34-15 in games he starts, and he has 3 no-hitter games on his resumé and a 20K strikeout game. If the Nationals do not extend Wilson Ramos’ contract, he will head to Free Agency after this season.

This entry was posted in Analysis, Ramos. Bookmark the permalink.
← Previous Article | Next Article →