The Draft is on Thursday and the #Nats have picks!

It has been a while since the Washington Nationals fans have had some buzz around draft day since it has been a long time now that the Nats have picked twice in the 1st round.  The Nats had 3 picks in the 1st round in 2011 which was the year they selected Anthony Rendon, Alex Meyer, and Brian Goodwin.

You would have to go back to 2012 when the Nats selected Lucas Giolito with the 16th overall pick for the highest pick the Nats have had in the last 5 years which is a by-product of finishing with one of the better records in baseball. In 2013, the Nationals forfeited their 1st round pick for signing free agent Rafael Soriano and the Nats forfeited their 1st round pick in 2015 for signing free agent Max Scherzer.

In 2014, with the 18th overall pick the Nats selected Erick Fedde, and last year they got Andrew Stevenson as their top overall pick which came in the middle of the 2nd round (#58 overall).

This year, the Nationals have the 28th and the 29th picks in the draft which came as draft compensation for Jordan Zimmermann (Tigers) and for Ian Desmond (Rangers) who both signed with other teams and had draft compensation tied to them. The Nationals own 1st round pick which was #17 overall at the time was forfeited for signing Daniel Murphy.

The Collective Bargaining Agreement (CBA) put in suggested dollar valuations attached to each pick in the first 10 rounds of the Draft, and each team has an allotment known as their bonus pool which is equal to the total of all of the values of that team’s selections in those first 10 rounds of the Draft. This did not exist in 2010 when Bryce Harper was drafted which was one incentive for him to get into that draft class or he would have been subject to this slotting system. The more picks a team has, and the earlier it picks, the larger the pool. The signing bonuses for a team’s selections in the first 10 rounds, plus any bonus greater than $100,000 for a player taken after the 10th round, will apply toward the bonus-pool total.

From MLB regarding penalties for team’s spending over their total draft allocations: “Any team going up to 5 percent over its allotted pool will be taxed at a 75 percent rate on the overage. A team that overspends by 5-10 percent gets a 75 percent tax plus the loss of a first-round pick. A team that goes 10-15 percent over its pool amount will be hit with a 100 percent penalty on the overage and the loss of a first- and second-round pick. Any overage of 15 percent or more gets a 100 percent tax plus the loss of first-round picks in the next two Drafts.”

Who will Mike Rizzo  and Assistant General Manager Kris Kline and scouts pick is the next question and that is usually dependent on who is available from their “war room” board where they list their targets.

This year there are several locals on the board from University of Maryland, University of Virginia, and local high school players like Joe Rizzo, 3B, Oakton (Va.) H.S., Mike Shawaryn RHP, Univ. of Maryland, and Connon Jones RHP and Matt Thaiss, C, Univ of Virginia.  A little further up the road in Pennsylvania is Nolan Jones, 3B, of Holy Ghost Prep.

Baseball America’s site gives some of the best predictions and you can follow it here: http://www.baseballamerica.com/draft-preview/

Baseball America’s Blog is in a Disqus format so members here can comment there as well on this link here. 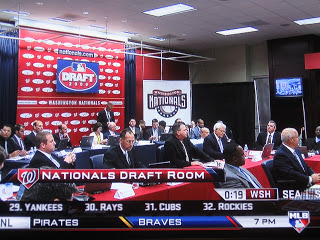 This entry was posted in Analysis, Draft, Lerners, MikeRizzo. Bookmark the permalink.
← Previous Article | Next Article →